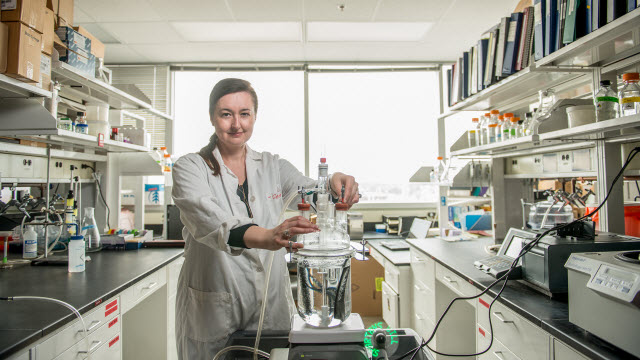 New research at Michigan State University and published in the current issue of Nature Communications shows how Geobacter bacteria grow as films on electrodes and generate electricity—a process that’s ready to be scaled up to industrial levels.

The thick biofilm, a gelatin microbial dynamo of sorts, is a combination of cells loaded with cytochromes, metal-based proteins, and pili, hairlike protein filaments discovered and patented by MSU’s Gemma Reguera, associate professor of microbiology.

The biofilms are comparable to an electrical grid. Each cell is a power plant, generating electrical discharges that are delivered to the underlying electrode using a network of cytochromes and pili. The cytochromes are the transformers and towers supplying electricity to the city. The pili represent the sparse-but-mighty powerlines that connect the towers, even those far away from the power plant, to the grid.

Cytochromes and pili work together for shorter ranges—the first ten layers of cells or so closest to the electrode. As more cells stack on the electrode, the efficiency of the cytochrome as electron carrier diminishes, and the pili do all of the work—discharging electrons 1,000 times faster than normal.

“The pili do all of the work after the first ten layers, and allow the cells to continue to grow on the electrode, sometimes beyond 200 cell layers, while generating electricity,” said Reguera, who co-published the paper with MSU graduate student Rebecca Steidl and MSU postdoctoral student Sanela Lampa-Pastirk, who work in Reguera’s lab. “This is the first study to show how electrons can travel such long distances across thick biofilms; the pili are truly like powerlines, at the nanoscale.”

The cytochromes lose their transfer speed once they get farther away. Without the wires, you can’t continue to grow the biofilm on the electrode, she added.

The methodical approach to dissect the contribution and interactions between the cytochromes and the pili was the key to this discovery. The researchers used a genetic approach to eliminate key electron carriers in the biofilms, cytochromes, and conductive pili, and studied the effect of the mutations in the growth of the biofilm and ability to generate electricity. They also constructed a mutant that produced pili with reduced conductivity.

“We used the mutants to grow biofilms of precise thickness and capacity to produce electricity,” Reguera said. “This information allows us to reconstruct the paths—cytochromes or pili—used by the cells to discharge electrons across the biofilm and to the underlying electrode.”

How the biofilm is mechanistically stratified as it grows in thickness on the electrode without compromising electricity generation was a revelation.

“We went from constructing the cell equivalent of a ten-story building to a 15- and a 20-story building and demonstrated the coordinated action of cytochromes and pili in the bottom floors and the need to discharge electrons via the wires in the upper floors to grid,” Reguera said. “We know that we can build 200-story buildings, which really opens up opportunities for which these biofilms can be used.”

In their natural state, microbes have a taste for waste, she added. Reguera’s bioelectrodes also have a big appetite for waste and are ready to be scaled up and used to clean up industrial sites while producing electricity as a byproduct. The next phase of this research will explore potential spinoff company options to bring the bioelectrodes to market.

This research was funded by the National Science Foundation, an MTRAC grant supported by the State of Michigan 21st Century Jobs Funds (received through the Michigan Strategic Fund and administered by the Michigan Economic Development Corporation), and MSU AgBioResearch.