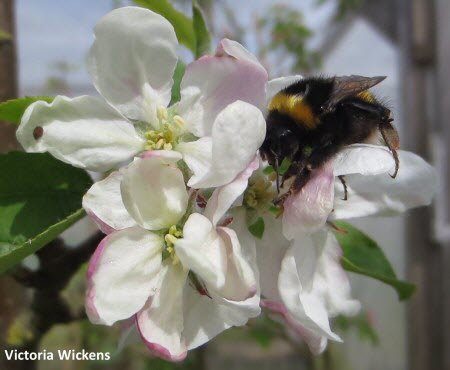 “Until now, research on pesticide effects has been limited to direct effects on bees themselves,” said Raine, who headed the study that included researchers from Royal Holloway University of London and the University of Reading.

“This information provides a new perspective when trying to fully understand the trade-offs involved when deciding whether to use insecticides.”

Previously, Raine and other scientists have found that neonicotinoid pesticides – the most widely used group of insecticides worldwide – affect bee behaviour, including pollen collection, learning performance and reproduction.

This new study shows that exposure to field levels of a pesticide affects the ability of bumblebee colonies to pollinate apple trees.

“These results have important implications for both sustainable crop production and the functioning of natural ecosystems,” said Raine, who came to Guelph from Royal Holloway in 2014 as the Rebanks Family Chair in Pollinator Conservation.

“Bumblebees are major pollinators of apples and many other important crops around the world. Together with other wild and managed insects their pollination services to crops are valued at close to $500 billion CDN worldwide every year.”

For the study, Raine and his collaborators exposed 24 bumblebee colonies to the widely used neonicotinoid pesticide thiamethoxam. Exposure levels were comparable to those found in field settings. The experiment, which included control groups, mimicked spring pollination conditions.

More than 75 million tonnes of apples are harvested annually by 95 countries.

It’s a concerning finding, Raine said. “If exposure to pesticides alters pollination services to apple crops, it’s likely that other crops, particularly fruits, vegetables and nuts, and diverse wild plants that rely on bumblebees could also be affected.”

“This makes our study both useful and translatable in a much broader context when considering the potential impacts of pesticide exposure on the pollination services provided by bees.”

The research was supported by the U.K. Insect Pollinators Initiative (a scheme jointly-funded by the Biotechnology and Biological Sciences Research Council (BBSRC), the Department for Environment, Food and Rural Affairs (Defra), the Natural Environment Research Council (NERC), the Scottish Government and the Wellcome Trust) and Raine is supported by The W. Garfield Weston Foundation.