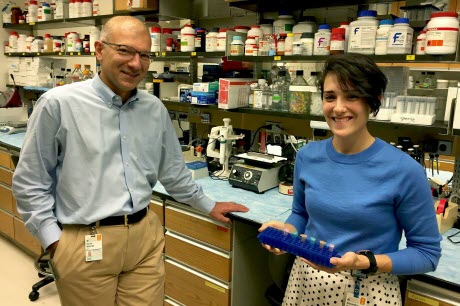 Research by doctoral student Alexandra Bettina, right, caused Dr. Borna Mehrad to rethink his hypothesis on the role of an important molecule in inhibiting pneumonia infections.Photo courtesy of the University of VirginiaA molecule being targeted in cancer is also critical for the immune system’s ability to battle pneumonia, researchers at the University of Virginia School of Medicine have determined. The finding may offer a new way for doctors to boost patients’ ability to fight off the life-threatening infection as bacteria become more and more resistant to antibiotics.

“We’re interested in seeing if there are things we can do to strengthen the natural defenses of the host to help them fight the infection more effectively,” said Dr. Borna Mehrad of UVA’s Division of Pulmonary and Critical Care Medicine. “Potentially this would be the sort of thing you could do in addition to antibiotics to help patients with severe infections.”

Clearly M-CSF has an important role in battling pneumonia, but what exactly does it do?

“M-CSF has previously been shown to help make a type of immune cell, called monocytes, so my idea was that if you take it away, infected hosts just stop making monocytes and that’s why they get sick,” Mehrad said, “and it turned out that was completely wrong.”

Instead, the researchers determined, M-CSF helped monocytes survive once they have arrived in the infected tissues. Mehrad credited a PhD student in his lab, Alexandra Bettina, with making key observations that completely changed the course of the research.

“As I had expected, when we blocked the action of M-CSF...we saw fewer monocytes in the lung. And I thought, well, there you have it,” Mehrad said. “But what Alexandra did was look at the number of cells in the bone marrow, when they’re made, and the blood, which is how they get to the lung. And she found that, in the absence of M-CSF, the number of monocytes in the bone marrow and blood was completely unaffected...but was dramatically reduced in the lung.”

That meant the original hypothesis was wrong. The cells were being made, despite the lack of the cytokine; they just weren’t surviving in the lungs to do their jobs.

But by knowing more about M-CSF, doctors one day may be able to make them very good soldiers indeed.

“If you take M-CSF away, the infections get worse, so that raises two important questions about therapy: Would more be better? It may be that during infection, the body is making the right amount of M-CSF and if we add extra, it won’t improve outcomes further,” he said. “The second possibility is that there is room for improvement: in the fight between monocytes and the bacteria, M-CSF may make monocytes live longer and give them an edge. In addition, some people with weakened immunity might not make enough of M-CSF. If that’s the case, you could augment that and improve their ability to fight the infection.”

The discovery has been described in a paper published online by the Journal of Immunology. Its authors are Bettina, Zhimin Zhang, Kathryn Michels, R. Elaine Cagnina, Isaah S. Vincent, Marie D. Burdick, Alexandra Kadl, and Mehrad.