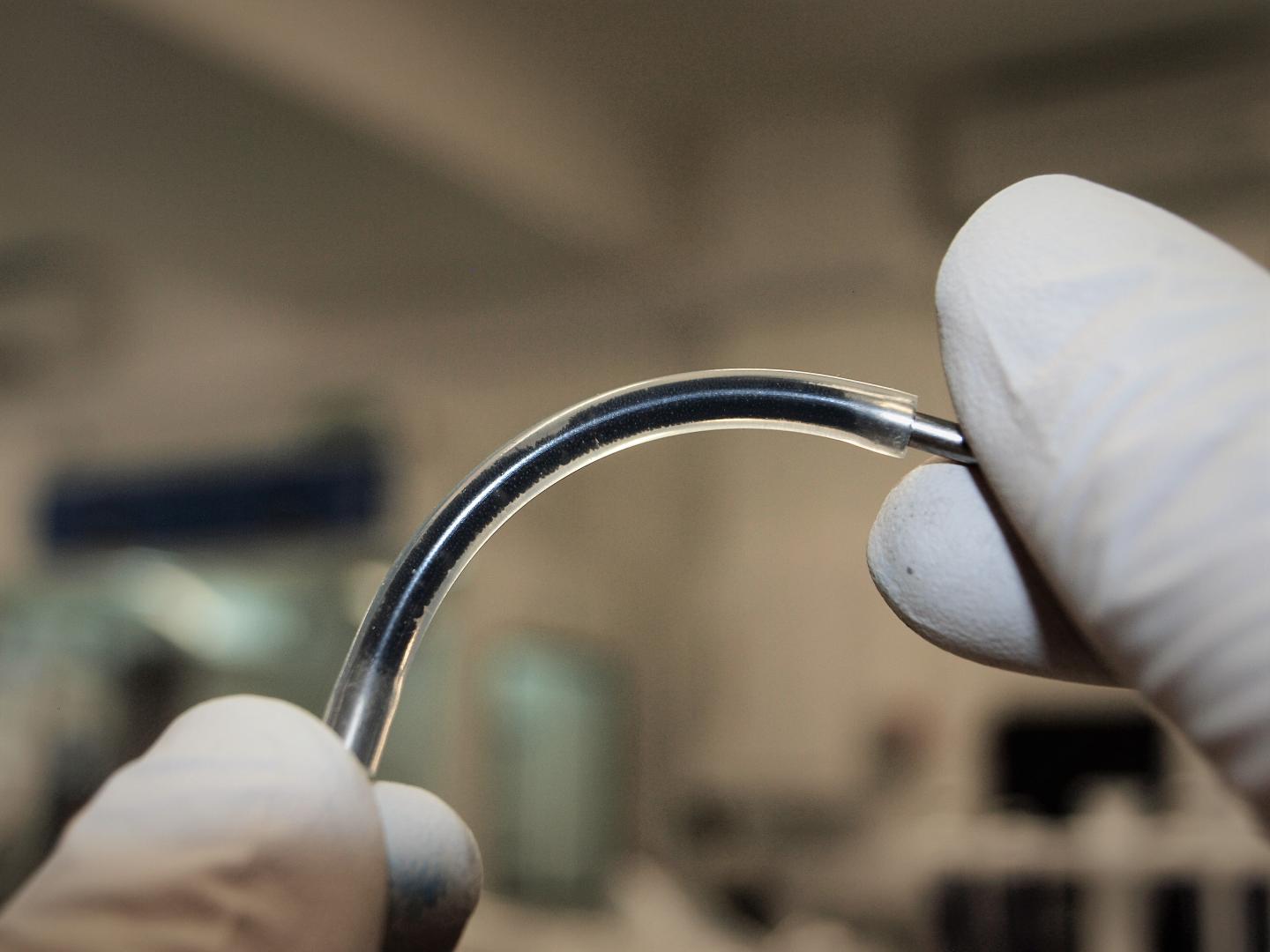 This is a sensing element of a prototype of the monitor device (flexible pipe filled with graphene emulsion) -- developed by University of Sussex physicists.Photo Source: University of SussexSick babies in remote parts of the world could be monitored from afar thanks to new wearable technology designed by physicists at the University of Sussex. And parents at home, concerned about the risk of cot death, could keep track of their new babies' heart and breathing rates with automatic updates to their smart phones, using 'fitness tracker'-style technology built into baby sleep suits.

The unobtrusive sensors - the most sensitive liquid-based devices to have ever been developed - could also be transformative for anyone with life-threatening conditions such as sleep apnea. In addition, because graphene is cheap to produce, the new breakthrough should be affordable.

Professor Alan Dalton, from the School of Mathematics and Physical Sciences, and his team of physicists at the University of Sussex have created a liquid made from an emulsion of graphene, water, and oil, which conducts electricity. The breakthrough is described in a paper published in the peer-reviewed Royal Society of Chemistry journal Nanoscale. A prototype has been created and the team are talking to commercial sponsors to fund further research so that the product can be brought to market.

The team were inspired to create this new health monitor after the Bill and Melinda Gates Foundation called for new affordable wearable health technologies for babies in situations where resources are scarce.

Graphene is a two-dimensional material made from carbon atoms that is strong, flexible, and conductive. When a channel or tube holding the liquid is stretched, even by a small amount, the conductivity of the liquid changes. This means that the respiration rates and pulses of people wearing the device can be tracked. 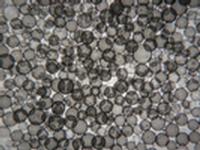 This is a micrograph of the graphene, water and oil emulsion developed by Uni of Sussex physicists.Image Credit: University of Sussex

Because the new liquid technology is so sensitive, it picks up very small signals when attached to the body. In order to monitor the pulses of babies at the moment, clunky sensors need to be attached to babies' tiny feet or hands, which often fall off. The information is then relayed to a monitor by wires which can restrict the child's movement.

Professor Dalton's technological development would see the monitoring done wirelessly and non-invasively with a 'fitness tracker'-like band - or even embedded within the fabric of a sensor vest for the baby to wear.

"Using the conducting liquid emulsions we have developed, we will produce cheap, wearable sensors based on graphene. The devices will be comfortable, non-invasive and can provide intuitive diagnostics of breathing and heart rate. We will eventually have a suit that the baby can wear which will read-out all vital information wirelessly. We hope to see this made available within two to four years.

"In the laboratory we have created a sensor that has the potential to drastically improve early detection of life-threatening symptoms such as sleep apnea or cardiac arrhythmia, where constant monitoring with conventional equipment is challenging outside of the hospital environment."

"Of course the ultimate potential is wider than that. Anyone interested in tracking their heart or respiration rates - joggers for example - may be interested to wear this technology within their exercise gear. I came up with the idea for the new graphene emulsion at the core of this technology while making salad dressing - which is a type of emulsion - at home with my daughter. It's amazing how, as scientists, we take inspiration from the everyday world around us."

Dr Matthew Large, lead researcher on the project in the School of Mathematics and Physical Sciences, describes the new development:

"What we've done is similar to how you might make a salad dressing; by shaking together water and oil, you make tiny droplets of one liquid floating in the other because the two don't mix. Normally, the droplets would all collect together and the liquids separate over time, like the droplets in a lava lamp. We've resolved this by putting graphene in. The graphene, which is an atom thick, sits at the surface of the droplets and stops them from coalescing."

"What's quite exciting about this new type of conductive liquid is how sensitive it is to being stretched. When the graphene particles are assembled around the liquid droplets electrons can hop from one particle to the next; this is why the whole liquid is conductive. When we stretch our sensors we squeeze and deform the droplets; this moves the graphene particles further apart and makes it much harder for the electrons to hop across the system. The sensitivity of this new kind of strain sensor is actually much higher than a lot of existing technologies, and it is the most sensitive liquid-based device ever reported by quite a significant margin."

"Graphene is very affordable as it can be produced using naturally-occurring graphite, so this could be rolled out on a big scale. This is good news for health services because the new technology will not be expensive to make and buy. It also means it should be affordable to individuals."