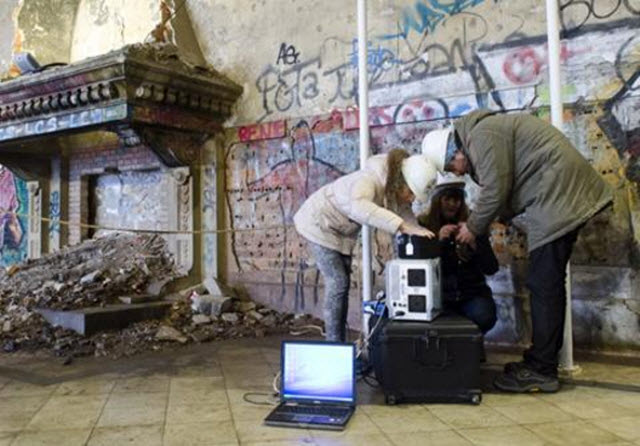 Researchers at Punta Begoña Galleries are shown.Photo Courtesy of: UPV/EHU

UPV/EHU (University of the Basque Country) researchers have managed to identify the materials used to build the Punta Begoña Galleries (Getxo, Bizkaia), one of the most significant, early 20th-century buildings in the province of Bizkaia and the Basque Country and which are now in a state of deterioration. In addition to characterising the materials, the deterioration problems the galleries have been suffering have also been analysed. This information will be of tremendous interest in making future decisions regarding what type of components to use in the reconstruction of the building and whether the ones present today should be retained. So the results of this study can be applied in the field of architecture, building rehabilitation, construction materials, chemical analysis, etc.

In regards identifying the materials, the main components of the mortars of the gallery walls are calcite and gypsum. Alite and belite, the two compounds that are characteristic of clinker (the principal component) in Portland cement, have also been found. In regards the ceilings, that of the upper gallery is based on calcite, quartz, aragonite and gypsum. The appearance of aragonite, the main component of shells and coral skeletons, confirms that beach sand was used as the aggregate in some of the mortars. The ceiling of the lower gallery consists of three layers of different mortars. Right now, the outer one is covered in a black crust; this is a layer of gypsum that is formed as a result of the degradation of the calcite when coming into contact with the sulphur dioxide in the atmosphere, which renders it capable of accumulating particles of carbon and metals from the atmosphere surrounding it. The composition of the inner layers is very similar to that of the ceiling of the inner gallery while the composition of the outermost layer of the ceiling was very similar to that of the mortar used to clad the walls.

In regards the deterioration problems affecting the materials used to build the galleries, it is worth drawing attention to two of them. Firstly, the hydration/dehydration process of the gypsum on the ceiling of the lower gallery, the change cycles of which may cause cracking owing to the volume changes. Secondly, the appearance of different types of efflorescences in the mortars. Efflorescences are salts that form as a result of the combination between compounds in the material in the gallery and other environmental chemical elements. This process causes a part of the original material in the walls and ceilings to dissolve, become lost and later reprecipitate or generate a new material with its composition and properties altered.

The materials in the Punta Begoña Galleries have been identified using portable Raman spectroscopy. It is a technique that is carried out in two phases. Firstly, the materials and formations resulting from deterioration processes are characterised in situ, which allows the areas of greatest interest to be selected for a subsequent sample taking of the materials. In the second phase, and now in the lab, the findings are combined with various analyses involving scanning electron microscopy coupled to an elemental analyser (SEM_EDS), X-ray diffraction (XRD) and elemental imaging by means of energy-dispersive X-ray fluorescence (ED-XRF).

Owing to the unusual nature of their use, the uniqueness of their location and the technology used to build them, the Punta Begoña Galleries (Getxo) are one of the most significant, early 20th-century constructions in the province of Bizkaia and the Basque Country.

Related Article: Scientists Use Mass Spectrometry to 'Look Inside' an Ancient Greek Amphora

All this, plus the state of deterioration they are displaying right now, has led to the signing of a collaboration agreement between Getxo Town Council and the UPV/EHU-University of the Basque Country that seeks to restore them through a research and execution process open to the public and conceived as being at the service of the general public.

So alongside a team of experts from Getxo Town Council and with the collaboration of the Chartered Provincial Council of Bizkaia and the Government of the Basque Autonomous Community, five UPV/EHU research groups are working through an interdisciplinary approach to restore the galleries. The UPV/EHU is fulfilling the role of advisory body and will be directing the work that is being proposed to restore the Punto Begoña Galleries.