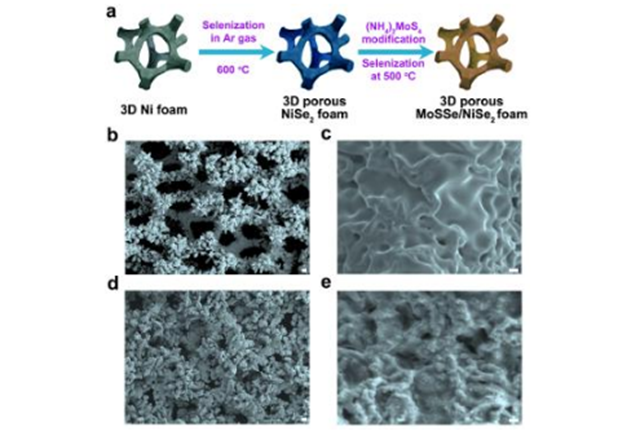 Hydrogen is often considered a fuel for the future, in the form of fuel cells to power electric motors or burned in internal combustion engines. But finding a practical, inexpensive and nontoxic way to produce large amounts of hydrogen gas - especially by splitting water into its component parts, hydrogen and oxygen - has been a challenge.

A team of researchers from the University of Houston and the California Institute of Technology has reported a more efficient catalyst, using molybdenum sulfoselenide particles on three-dimensional porous nickel diselenide foam to increase catalytic activity.

The foam, made using commercially available nickel foam, significantly improved catalytic performance because it exposed more edge sites, where catalytic activity is higher than it is on flat surfaces, said Zhifeng Ren, MD Anderson Professor of physics at UH.

Ren is lead author of a paper in Nature Communications describing the discovery. Other researchers involved include Haiqing Zhou, Fang Yu, Jingying Sun, Ran He, Shuo Chen, Jiming Bao and Zhuan Zhu, all of UH, and Yufeng Huang, Robert J. Nielsen and William A. Goddard III of the California Institute of Technology.

"With the massive consumption of fossil fuels and its detrimental impact on the environment, methods of generating clean power are urgent," the researchers wrote. "Hydrogen is an ideal carrier for renewable energy; however, hydrogen generation is inefficient because of the lack of robust catalysts that are substantially cheaper than platinum."

Platinum catalysts have the highest efficiency rate for hydrogen evolution, said Ren, who also is a principal investigator at the Texas Center for Superconductivity. But platinum is rare, difficult to extract and too expensive for practical use, he said, and researchers continue to seek less expensive ways to split water into its component parts.

Currently, most hydrogen is produced through steam methane reforming and coal gasification; those methods raise the fuel's carbon footprint despite the fact that it burns cleanly.

Molybdenum sulfoselenide and similar layered compounds have shown promise as catalysts, but so far no one has boosted their performance to viable levels in bulk form. The researchers say most active catalysis on those layered compounds, known as layered transition-metal dichalcogenides, or LTMDs, takes place at the edges, making the idea of a substrate with a large number of exposed edges more desirable. Also, they wrote, "arranging two different materials into hybrids might lead to synergistic effects that utilize the best properties of each component."

Testing determined that the hybrid catalyst required 69 millivolts from an external energy source to achieve a current density of 10 milliamps per square centimeter, which the researchers said is much better than many previously reported tests. In this case, the current "splits" the water, converting it to hydrogen at the cathode. Achieving the necessary current density with lower voltage improves energy conversion efficiency and reduces preparation costs.

Equally important, he said, was the ability to increase current output at a faster rate than the increase in required energy input. The catalyst remained stable after 1,000 cycles at a constant current.

The work will continue as researchers focus on reducing required voltage.