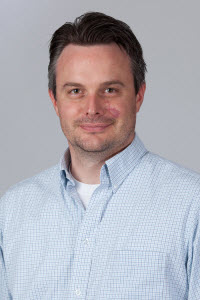 Professor Matthew Disney (pictured) led the study with research associate Suzanne Rzuczek on the Florida campus of The Scripps Research Institute.Photo credit: James McEnteeRNA carries out thousands of essential functions in cells, but many RNAs can act in uncontrolled ways and cause disease. For decades, scientists have tried to develop drug candidates that target human RNAs, but they have been hampered by an inability to achieve sufficient selectivity (to reduce the potential of side effects) and potency (ensuring effectiveness).

In a study published Dec. 12 online ahead of press in the journal Nature Chemical Biology, researchers—led by TSRI professor Matthew Disney and research associate Suzanne Rzuczek, with important contributions from professor Ryohei Yasuda and research associate Lesley Colgan of the Max Planck Florida Institute for Neuroscience—have disclosed several approaches to overcome these hurdles.

“This study reads like science fiction,” Disney said. “We present for the first time multiple solutions to this long-standing problem. With the precision of a surgeon’s scalpel, we have shown that small molecules can be designed to seek out and destroy only disease-causing RNAs. Further, we developed novel chemical approaches to use a disease-causing RNA to help make its own drug by using that RNA as a catalyst for drug synthesis at the needed site. It is like having your physician place a drug at the right place without exposing healthy cells.”

Although these studies have broad implications for RNA diseases in general, they were demonstrated on myotonic dystrophy type 1, an incurable inherited disorder that involves progressive muscle wasting and weakness. It is caused by an RNA defect known as a “triplet repeat,” a series of three nucleotides repeated more times than normal in an individual’s genetic code, in this case, a cytosine-uracil-guanine (CUG) triplet.

In many genetic diseases, there are two copies of the problem gene—a mutant copy that causes a disease and a normal copy that a cell needs to survive. Selective recognition of the diseased gene product has not been possible before.

“We developed several approaches to create allele-selective small molecules that seek out only the disease-causing gene product, including covalent binding, cleavage, and imaging,” said TSRI research associate Suzanne G. Rzuczek, first author of the study. “All approaches show precise recognition of toxic r(CUG) repeats and, more importantly, they showed that the mutant repeat is the sole target.”

"We probed disease-causing RNA using a technique called fluorescence lifetime imaging—a sensitive technique to measure fluorophore binding,” said Max Planck’s Ryohei Yasuda. “We were very excited when we observed a huge difference in signal from their probes between disease cells and normal cells under our microscope technique."

Max Planck’s Lesley Colgan added, "The combination of cutting-edge chemistry and microscopy techniques developed in Florida is a powerful approach to identify new methods to probe and manipulate (and kill) disease-causing RNA in cells."

Both Disney and Yasuda were 2015 recipients of the National Institutes of Health (NIH) Director’s Pioneer Award, which supports individual scientists of exceptional creativity who propose highly innovative approaches with high-impact potential.

In addition to Disney, Rzuczek, Colgan, and Yasuda, other authors of the study, “Precise Small Molecule Recognition of a Toxic RNA Repeat Expansion,” include Yoshio Nakai and Michael D. Cameron of TSRI and Denis Furling of Sorbonne Universités (Paris).

The study was supported by the NIH (grants DP1NS096898 and DP1NS096787), the Muscular Dystrophy Association (grant 380467) and the Myotonic Dystrophy Foundation.