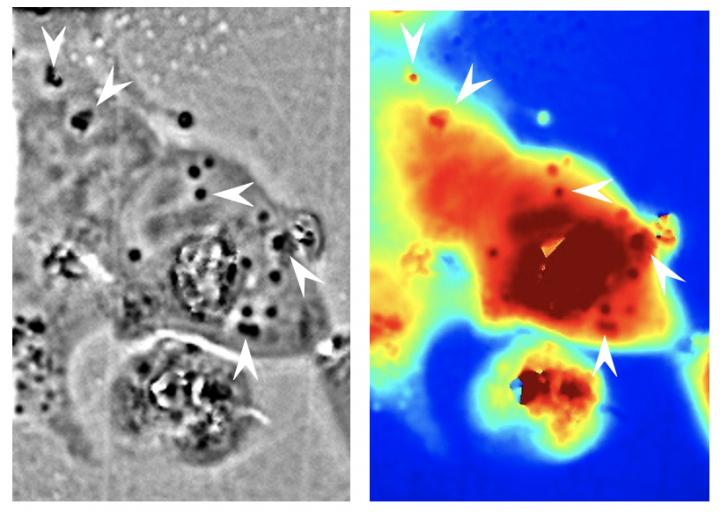 The black and white phase microscope image above helped UCI researchers identify where the squid reflectin protein nanostructures were present in human cells (dark regions, with some indicated by white arrows). The panel in color shows the associated pathlength for light traveling through a given area (red corresponds to longer pathlengths and blue corresponds to shorter pathlengths).
Atouli Chatterjee, UC

IRVINE, CA — June 2, 2020 — Octopuses, squids, and other sea creatures can perform a disappearing act by using specialized tissues in their bodies to manipulate the transmission and reflection of light, and now researchers at the University of California, Irvine have engineered human cells to have similar transparent abilities.

In a paper published today in Nature Communications, the scientists described how they drew inspiration from cephalopod skin to endow mammalian cells with tunable transparency and light-scattering characteristics.

"For millennia, people have been fascinated by transparency and invisibility, which have inspired philosophical speculation, works of science fiction, and much academic research," said lead author Atrouli Chatterjee, a UCI doctoral student in chemical & biomolecular engineering. "Our project—which is decidedly in the realm of science—centers on designing and engineering cellular systems and tissues with controllable properties for transmitting, reflecting, and absorbing light."

Chatterjee works in the laboratory of Alon Gorodetsky, UCI associate professor of chemical and biomolecular engineering, who has a long history of exploring how cephalopods' color-changing capabilities can be mimicked to develop unique technologies to benefit people. His team's bio-inspired research has led to breakthrough developments in infrared camouflage and other advanced materials.

For this study, the group drew inspiration from the way female Doryteuthis opalescens squids can evade predators by dynamically switching a stripe on their mantle from nearly transparent to opaque white. The researchers then borrowed some of the intercellular protein-based particles involved in this biological cloaking technique and found a way to introduce them into human cells to test whether the light-scattering powers are transferable to other animals.

This species of squid has specialized reflective cells called leucophores which can alter the how they scatter light. Within these cells are leucosomes, membrane-bound particles which are composed of proteins known as reflectins, which can produce iridescent camouflage.

Related Article: Squid Skin Could Be the Solution to Camouflage Material

In their experiments, the researchers cultured human embryonic kidney cells and genetically engineered them to express reflectin. They found that the protein would assemble into particles in the cells' cytoplasm in a disordered arrangement. They also saw through optical microscopy and spectroscopy that the introduced reflectin-based structures caused the cells to change their scattering of light.

"We were amazed to find that the cells not only expressed reflectin but also packaged the protein in spheroidal nanostructures and distributed them throughout the cells' bodies," said Gorodetsky, a co-author on this study. "Through quantitative phase microscopy, we were able to determine that the protein structures had different optical characteristics when compared to the cytoplasm inside the cells; in other words, they optically behaved almost as they do in their native cephalopod leucophores."

In another important part of the study, the team tested whether the reflectance could potentially be toggled on and off through external stimuli. They sandwiched cells in between coated glass plates and applied different concentrations of sodium chloride. Measuring the amount of light that was transmitted by the cells, they found that the ones exposed to higher sodium levels scattered more light and stood out more from the surroundings.

"Our experiments showed that these effects appeared in the engineered cells but not in cells that lacked the reflectin particles, demonstrating a potential valuable method for tuning light-scattering properties in human cells," Chatterjee said.

While invisible humans are still firmly in the realm of science fiction, Gorodetsky said his group's research can offer some tangible benefits in the near term.

"This project showed that it's possible to develop human cells with stimuli-responsive optical properties inspired by leucophores in celphalopods, and it shows that these amazing reflectin proteins can maintain their properties in foreign cellular environments," he said.

He said the new knowledge also could open the possibility of using reflectins as a new type of biomolecular marker for medical and biological microscopy applications.

- This press release was originally published on the UCI News website