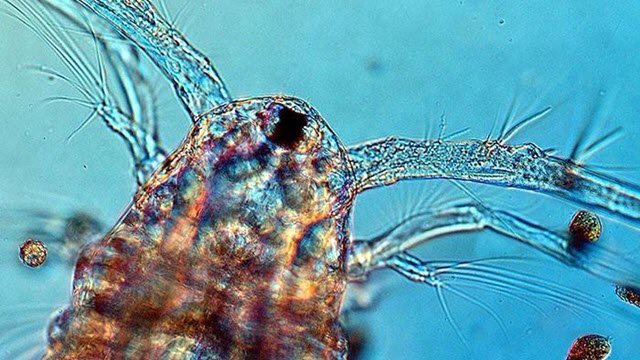 Copepods, the world's most common animal, release unique substances into the oceans. Concentrations of these substances are high enough to affect the marine food web, according to new research from the University of Gothenburg. The studies also show that phytoplankton in the oceans detect the special scent of copepods and do their utmost to avoid being eaten.

The substances that copepods release into seawater are called copepodamides. When phytoplankton in the water sense copepodamides, they activate their defense mechanisms to avoid being eaten. Some phytoplankton then produce light, bioluminescence; other plankton use chemical warfare and produce toxins or shrink in size.

"Since the phytoplankton in the ocean are the basis of all marine life, the effects become large-scale," says Erik Selander at the Department of Marine Sciences at the University of Gothenburg, who heads the research team.

"The substances are remarkably potent. Very small quantities produce large systemic effects. The amount of copepodamide that would fit in a grain of salt are enough to cause phytoplankton in a whole swimming pool to mobilize their defencss. Some of the defenses involve very strong toxins, and as a result copepodamides can have far-reaching effects such as toxic algal blooms."

The article, which has now been published in Science Advances, also shows that copepodamides affect more of the ocean's inhabitants than researchers previously recognized.

"Including a diatom that produces the domoic acid neurotoxin. It is toxic for many organisms and causes memory loss, among other things, in humans. Other diatoms respond by changing their appearance, going from long, contiguous chains of cells to shorter or single-celled variations."

Size is an important property in the ocean. When it changes, there are repercussions in a series of other processes.

"For example, the amount of carbon exported from the surface to deeper water or who eats whom in the plankton community."

The new discoveries increase our understanding of the marine food web, and especially the mechanisms that lead to toxic algal blooms.

"We previously have not been able to understand why and when toxic algal blooms occur. Copepodamides seem to be an important and overlooked mechanism that contributes to the occurrence of toxic algal blooms by causing producers of toxins to produce as much as 10 times more toxins than normal."