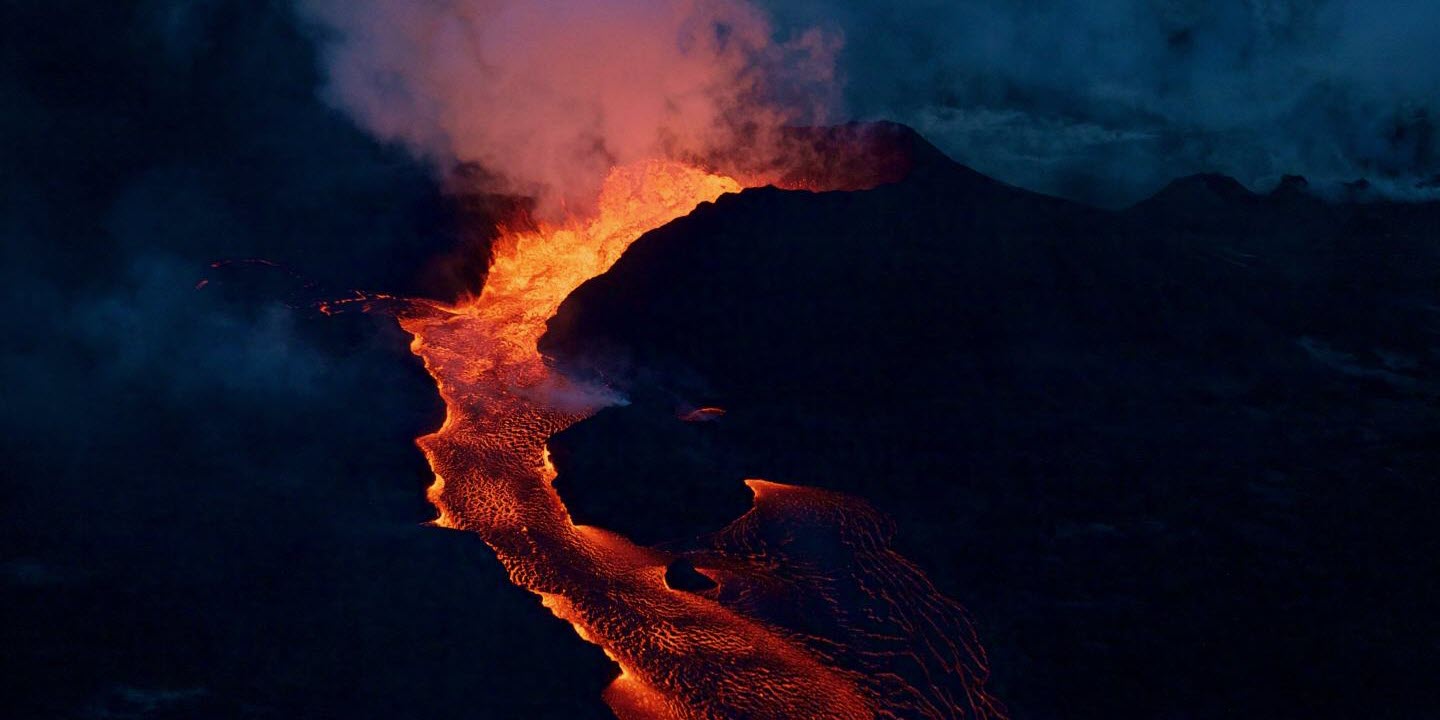 Lava streaming from an active vent during the 2018 eruption of Kīlauea Volcano.
US Geological Survey

MIAMI, FL — Excessive and sustained rainfall triggered the 2018 eruption of Kīlauea volcano in Hawaii, according to researchers at the University of Miami (UM) Rosenstiel School of Marine and Atmospheric Science. The researchers suggest that local rainfall patterns may contribute significantly to the timing and frequency of the eruption at Kīlauea and perhaps at other volcanoes.

In a new study, published in the journal Nature, UM Rosenstiel School scientists Jamie Farquharson and Falk Amelung showed that the eruption was likely initiated by prolonged, and at times extreme, rainfall in the months leading up to the event.

"We knew that changes in the water content in the Earth's subsurface can trigger earthquakes and landslides. Now we know that it can also trigger volcanic eruptions," said Falk Amelung, professor of geophysics at the UM Rosenstiel School and coauthor of the study. "Under pressure from magma, wet rock breaks easier than dry rock. It is as simple as that."

The long-lived eruption of Kīlauea, one of Hawaii's most active volcanoes, entered an extraordinary new phase on May 3, 2018, throwing incandescent lava nearly two hundred feet in the air and spewing lava over 13 square miles across the well-populated east coast of Hawaii's Big Island. The unprecedented eruption, which destroyed hundreds of homes, involved the collapse of the summit caldera before it ceased four months later in September 2018.

Using a combination of ground-based and satellite measurements of rainfall, Farquharson and Amelung modeled the fluid pressure within the volcano's edifice over time—a factor that can directly influence the tendency for mechanical failure in the subsurface, ultimately driving volcanic activity.

The team's results highlight that fluid pressure was at its highest in almost half a century immediately prior to the eruption, which they propose facilitated magma movement beneath the volcano. Their hypothesis also explains why there was no widespread uplift at the volcano in the months prior.

"An eruption happens when the pressure in the magma chamber is high enough to break the surrounding rock and the magma travels to the surface," said Amelung. "This pressurization causes inflation of the ground by tens of centimeters. As we did not see any significant inflation in the year prior to the eruption we started to think about alternative explanations."

While small steam explosions and volcanic earthquakes have been linked to rainfall infiltration at other volcanoes in the past, this is the first time that this mechanism has been invoked to explain deeper magmatic processes. 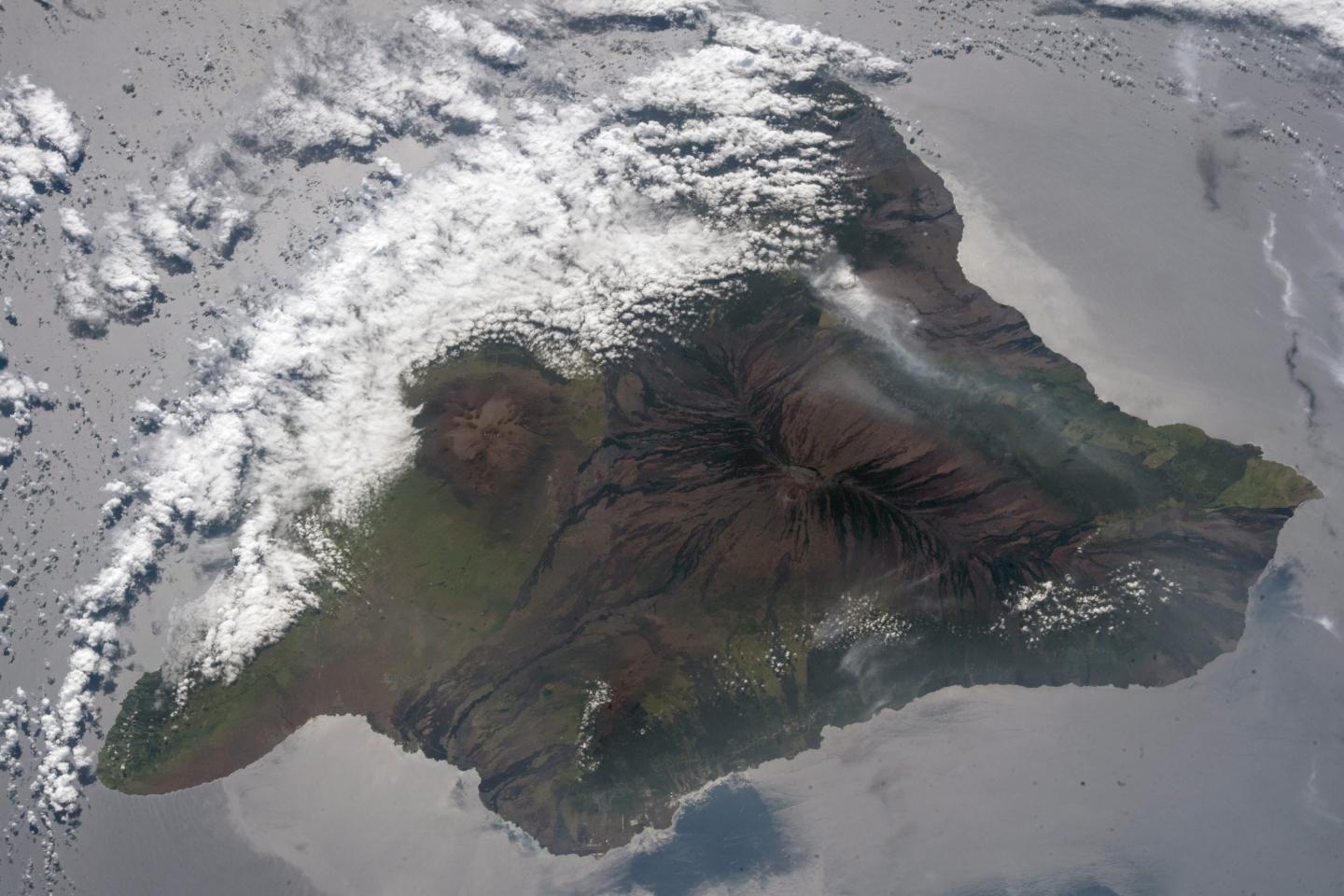 May 12, 2018, the ash plume of Kīlauea is visible drifting across the island as a large bank of rainclouds encroaches on the northern coast.
Taken by astronaut on board the ISS (NASA Photo ID: ISS055-E-70297)

"Interestingly, when we investigate Kīlauea's historical eruption record, we see that magmatic intrusions and recorded eruptions are almost twice as likely to occur during the wettest parts of the year," said Jamie Farquharson, a postdoctoral researcher at the UM Rosenstiel School and lead author of the study.

The authors highlight that if this process can be detected at Kīlauea, then it is likely to occur elsewhere as well.

"Having established the evidence for rainfall-triggered eruptions at Kīlauea, it will be fascinating to investigate other volcanoes," said Farquharson. "If we can identify regions of the globe where this kind of coupling between rainfall and volcanism exists, it could go a long way towards advanced warning of associated volcanic hazards."

"It has been shown that the melting of ice caps in Iceland led to changes of volcanic productivity," said Farquharson. "As ongoing climate change is predicted to bring about changes in rainfall patterns, we expect that this may similarly influence patterns of volcanic activity."

"This study was only possible thanks to a number of Earth-observing satellites," said Amelung. "We obtained precipitation information from a joint mission between NASA and the Japanese Space Exploration Agency and ground deformation observations from a mission of the European Space Agency."