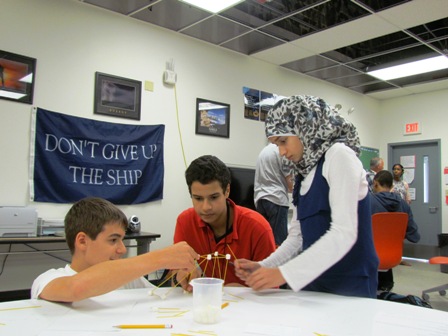 The Wake NC State University STEM Early College High School was one of the schools included in the study.NC State UniversityThe eight elements identified in UChicago’s STEM School Study (S3) and some of their associated components are:

STEM-specific elements seem to be paradoxically missing from this list, but the Outlier team learned that these often serve instead as an underlying theme. “We found through our research that schools define themselves most by the instructional strategies that they use, the cultural norms that they set, and how they work toward real-life and career-oriented experiences for students,” said Melanie LaForce, associate director of the Outlier group.

The Outlier group is part of the Center for Elementary Mathematics and Science Education. The group’s S3 study, funded by the National Science Foundation, encompassed data collected from more than 23 schools in seven states nationwide. Some of the schools were rural, others urban.

“All the schools in this study are exemplary,” LaForce said. They are also inclusive, meaning that they enroll students regardless of their achievement level. And they all tend to define themselves by the eight elements, their instructional practices, their culture, giving back to the community, having a career focus and their student-centered nature.

In this study, the researchers asked, “What is it that STEM schools actually say they’re doing,” LaForce said. This approach sets the study apart from other STEM research projects, which often focus on STEM education rather than STEM schools.

One common assumption is that STEM schools are designed to feed the pipeline of professional scientists, and some student-selective schools do pursue that goal. But the schools in the S3 study are balancing multiple purposes, said Jeanne Century, director of the Outlier group. These include preparing students for STEM-related jobs, or simply to ensure that they become STEM literate.

“All of our schools would say that science, technology, in some cases engineering and also math, are very important to their school,” LaForce said. But equally important were English language arts, history and other subjects.

In addition to the S3 study, the NSF is funding another project with Outlier Research & Evaluation to begin creating measures for one of the 14 indicators of successful K-12 STEM education. The National Research Council’s Board on Science Education created the indicators. A summary of them appears in a 2013 report, Monitoring Progress Toward Successful K-12 STEM Education: A Nation Advancing? The Outlier group is working on Indicator 1: “Number of and enrollment in different types of STEM schools and programs in each district.”

What may seem to be a simple task turns out to be quite challenging because there is no generally accepted definition for what constitutes a STEM school or program.

“This isn’t for researchers,” Century said. “This is for practitioners. When they’re asked ‘How many STEM schools and programs do you have?’ They need to be able to answer that question, and we need to ensure that our work is speaking the right language if they are going to understand it.”

Whatever the language turns out to be, it will not consist of a single definition of a STEM school. “It’s not possible,” Century said. Doing so would exclude many good STEM schools.

The Outlier group also has a contract with Chicago Public Schools to develop a clear set of criteria and target indicators to define STEM schools and programs within the district. This work follows the CPS launch of its K-12 STEM Strategy, which aims to triple the number of students prepared for college and career STEM fields by 2018, said Rukiya Curvey Johnson, executive director of STEM & Strategic Initiatives for CPS.

CPS was interested in working with the Outlier group because of its experience with the STEM School Study.

“This ability to work with a group that has studied STEM schools across the country and has a national perspective on essential components of STEM education will be an invaluable resource for informing our practice as we move toward achieving our goal for STEM,” Johnson said.