DNA replication is essential to all life, yet many basic mechanisms in that process remain unknown to scientists. The structure of the replisome—a block of proteins responsible for unwinding the DNA helix and then creating duplicate helices for cell division—is one such mystery.

Now, for the first time, a team of researchers from The Rockefeller University, Brookhaven National Laboratory, and Stony Brook University has revealed that vital complex’s molecular architecture. And to their surprise, it does not look as they had expected.

“Our finding goes against decades of textbook drawings of what people thought the replisome should look like,” says Michael O’Donnell, Anthony and Judith Evnin Professor, head of Rockefeller’s Laboratory of DNA Replication and a Howard Hughes Medical Institute investigator. He is the senior author of the study, published November 2 in Nature Structural and Molecular Biology. “However, it’s a recurring theme in science that nature does not always turn out to work the way you thought it did.”

A complete rendering of the eukaryotic replisome 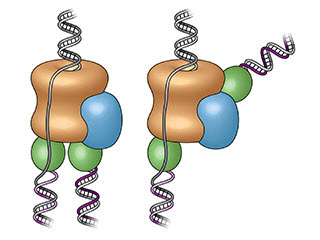 First glimpse: Previously (left), the replisome’s two polymerases (green) were assumed to be below the helicase (tan), the enzyme that splits the DNA strands. The new images reveal one polymerase is located at the front of the helicase, causing one strand to loop backward as it is copied (right).Image Credit: Brookhaven National LaboratoryThe findings focus on the replisome found in eukaryotic organisms, a category that includes a broad swath of living things, including humans and other multicellular organisms. O’Donnell and others have long studied replisomes in simpler, single-celled bacteria, but the more complex version has over 30 different gears, or proteins, and required about 15 years for O’Donnell’s lab to obtain. Through these previous studies, his lab has learned how to assemble the more complex replisome from its components.

But until now, no pictures existed to show just how everything fit together in the eukaryotic replisome. To create them, the team began building the complete structure piece by piece, and examining its shape in the electron microscope—a powerful device used to study protein structures, and a specialty of co-author Huilin Li, a molecular biologist at Brookhaven National Laboratory and Stony Brook University. The pictures Li and members of his lab captured were the first ever made of a complete replisome from any type of cell.

The DNA helix has two DNA strands, and each is duplicated by a separate DNA polymerase, an enzyme that creates DNA molecules by pairing single nucleotides, the basic units of DNA, with their matching partners. Another enzyme in the replisome is the helicase that, like a zipper, is responsible for separating DNA into two single strands in preparation for replication. For years, the two polymerases were thought to follow along behind the helicase, or below it, as it unzips the strands. But the new pictures of the replisome showed that one polymerase sits above the helicase.

A link to epigenetics

To identify which polymerase was at the top of the helicase, the team enlisted the help of co-authors postdoc Yi Shi and Brian Chait, the Camille and Henry Dreyfus Professor at Rockefeller and head of the Laboratory of Mass Spectrometry and Gaseous Ion Chemistry. They identified the top polymerase as Pol-ε.

Why the eukaryotic replisome developed such a structure is not known. O’Donnell and his colleagues suspect that it may have something to do with the evolution of multicellularity. As the helicase unzips two strands of DNA, it encounters nucleosomes, particles that tightly bundle DNA to fit it into a cell’s nucleus. These must be dislodged and then distributed to one new strand or the other. Previous work has shown that Pol-ε binds nucleosomes, and it may be that while riding atop the helicase, Pol-ε is in charge of distributing nucleosomes to the two strands, O’Donnell suggests.

“Changes to nucleosomes carry epigenetic information that instructs different cells to become the different tissues of the body, such as heart, brain, and other organs during embryonic development,” O’Donnell says. “So we can speculate that Pol-ε’s interaction with nucleosomes could play a role in assigning different epigenetic identities to the two new daughter cells after cell division, that instruct them to form different organs during development of a multicellular animal.”