Human umbilical cord blood can rejuvenate learning and memory in older mice, according to a study by researchers at the Stanford University School of Medicine.

The researchers identified a protein, abundant in human cord blood but decreasingly so with advancing age, that had the same effect when injected into the animals. 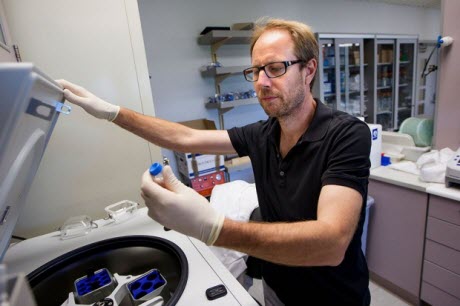 “Neuroscientists have ignored it and are still ignoring it, but to me it’s remarkable that something in your blood can influence the way you think,” said the study’s senior author, Tony Wyss-Coray, PhD, professor of neurology and neurological sciences and a senior research career scientist at the Veterans Affairs Palo Alto Health Care System. The lead author is former postdoctoral scholar Joseph Castellano, PhD, who is now an instructor of neurology and neurological sciences.

The study was published online April 19 in Nature.

In a widely discussed earlier study, Wyss-Coray’s lab showed that direct infusion of young mice’s plasma, the cell-free portion of blood, benefited old mice. Those benefits extended beyond biochemistry and physiology to actual performance on tests of memory and learning, the researchers found.

The new study marks the first demonstration that human plasma can aid older mice’s memory and learning, which both Wyss-Coray and Castellano said would seem to increase the likelihood that it could have a similar beneficial effect in people. It’s also promising from a drug-development standpoint, they suggested, that a single protein appears largely capable of mimicking those benefits.

Comparing blood plasma from 19- to 24-year-olds, 61- to 82-year-olds and umbilical cords, researchers identified age-associated changes in a number of proteins.

These changes, the investigators suspected, might affect a brain structure called the hippocampus, which in both mice and humans is critical for converting experiences into long-term memories. In particular, the hippocampus is essential for helping you remember spatial information, such as how to find your way back to the car you parked in a multilevel structure several hours ago, and information about autobiographical events, such as what you ate for breakfast.

For largely unknown reasons, the hippocampus is especially vulnerable to normal aging, said Wyss-Coray. “With advancing age, the hippocampus degenerates, loses nerve cells and shrinks,” he said. The capacity to learn and remember falters in lockstep. Hippocampal deterioration is also an early manifestation of Alzheimer’s disease.

To distinguish the effects of old, young and “youngest” human blood on hippocampal function, the researchers used immune-deficient laboratory mice that could be given repeated injections of human plasma without experiencing negative immune reactions. Experiments undertaken before injecting human plasma into the mice showed that, like their immune-competent peers, these mice’s hippocampal activity, integrity, and regenerative capacity dropped off in old age—indeed, a bit faster.

Old immune-deficient mice performed more poorly than younger ones on tests of memory and learning. One such test, the Barnes maze, employs a table, about 4 feet in diameter and 1.3 feet high, that is brightly lit and open to the surrounding environment—two factors that make mice feel insecure. The table is also full of holes, one of which is attached to a tube in which a scared mouse can find darkness and safety. The other holes offer only a drop to the floor from a height that would not physically harm a mouse but is enough deter one. Which hole has a burrowing tube attached to it can be changed from one session to the next. Visual cues to its location can also be transferred to help guide the mouse to the escape hole, memory permitting.

When the older mice received human umbilical-cord blood plasma every fourth day for two weeks, many measures of hippocampal function improved notably. Plasma from older people, on the other hand, didn’t help at all, while young-adult plasma induced an intermediate effect. And older mice’s performance on the Barnes maze and other tests was stellar in comparison with mice of the same age who got injections of saline instead of plasma.

Something in umbilical cord blood was making old brains act younger. To find out what it was, Wyss-Coray and his colleagues gauged plasma-protein levels in humans and mice from different age groups, in search of proteins that the two species share in common and whose levels change similarly with age. One protein in particular grabbed their attention: In a laboratory test designed to discern a substance’s ability to enhance nerve-cell activity in the brain, it triggered this activity to a great degree. The protein, called tissue inhibitor of metalloproteases 2, or TIMP2, belongs to a well-known family of four TIMPs that regulate the activity of other proteins whose function is to chop up yet other proteins occupying the matrix in which cells are embedded.

Injecting TIMP2 by itself into elderly mice largely duplicated the beneficial effects of umbilical-cord plasma. It even restored these mice’s nesting capacity: an instinctive penchant, largely lost in old age, for using available materials, such as cotton wads supplied by the researchers, to build nests in which mice typically prefer to sleep. But old mice that were given human cord plasma depleted of TIMP2 derived no learning and memory benefits. And administering TIMP2-neutralizing antibodies to young normal mice, who ordinarily perform well on memory tests, obliterated their prowess.

“TIMP2’s effects in the brain have been studied a little, but not much and not in aging,” said Castellano. “In our study, it mimicked the memory and learning effects we were getting with cord plasma. And it appeared to do that by improving hippocampal function.”

Stanford’s Office of Technology Licensing has filed for patents related to the findings in the study. Alkahest, a biotechnology company based in San Carlos, California, in which Castellano and Wyss-Coray hold equity and which Wyss-Coray co-founded, has licensed rights to this intellectual property.

The study was funded by the National Institute on Aging (grants K99AG051711, AG045034, DP1AG053015 and AG040877), the Jane Coffin Childs Foundation, the Simons Foundation, the U.S. Department of Veterans Affairs, the Glenn Foundation for Medical Research and the Stanford Brain Rejuvenation Project.