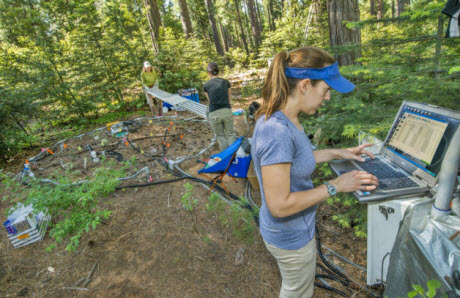 Their findings are based on a field experiment that, for the first time, explored what happens to organic carbon trapped in soil when all soil layers are warmed, which in this case extend to a depth of 100 centimeters. The scientists discovered that warming both the surface and deeper soil layers at three experimental plots increased the plots’ annual release of CO2 by 34 to 37 percent over non-warmed soil. Much of the CO2 originated from deeper layers, indicating that deeper stores of carbon are more sensitive to warming than previously thought.

They report their work online March 9 in the journal Science.

The results shed light on what is potentially a big source of uncertainty in climate projections. Soil organic carbon harbors three times as much carbon as Earth’s atmosphere. In addition, warming is expected to increase the rate at which microbes break down soil organic carbon, releasing more CO2 into the atmosphere and contributing to climate change.

But, until now, the majority of field-based soil warming experiments only focused on the top five to 20 centimeters of soil—which leaves a lot of carbon unaccounted for. Experts estimate soils below 20 centimeters in depth contain more than 50 percent of the planet’s stock of soil organic carbon. The big questions have been: to what extent do the deeper soil layers respond to warming? And what does this mean for the release of CO2 into the atmosphere?

“We found the response is quite significant,” says Caitlin Hicks Pries, a postdoctoral researcher in Berkeley Lab’s Climate and Ecosystem Sciences Division. She conducted the research with co-corresponding author Margaret Torn, and Christina Castahna and Rachel Porras, who are also Berkeley Lab scientists.

“If our findings are applied to soils around the globe that are similar to what we studied, meaning soils that are not frozen or saturated, our calculations suggest that by 2100 the warming of deeper soil layers could cause a release of carbon to the atmosphere at a rate that is significantly higher than today, perhaps even as high as 30 percent of today’s human-caused annual carbon emissions depending on the assumptions on which the estimate is based,” adds Hicks Pries.

The need to better understand the response of all soil depths to warming is underscored by projections that, over the next century, deeper soils will warm at roughly the same rate as surface soils and the air. In addition, Intergovernmental Panel on Climate Change simulations of global average soil temperature, using a “business-as-usual” scenario in which carbon emissions rise in the decades ahead, predict that soil will warm 4° Celsius by 2100. 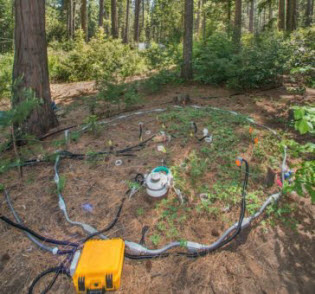 One of the experimental heating plots at Blodgett Forest Research Station. The ring around the plot protects the wiring supplying 22 heating cables that each go 2.4 meters into the ground. Each plot also has soil temperature and moisture sensors that measure continuously and automated chambers that measure soil respiration every 30 minutes.Photo Credit: Berkeley LabTo study the potential impacts of this scenario, the Berkeley Lab scientists pioneered an innovative experimental setup at the University of California’s Blodgett Forest Research Station, which is located in the foothills of California’s Sierra Nevada mountains. The soil at the research station is representative of temperate forest soils, that in turn account for about 13.5 percent of soil area worldwide.

The scientists built their experiment around six soil plots that measure three meters in diameter. The perimeter of each plot was ringed with 22 heating cables that were vertically sunk more than two meters underground. They warmed three of the plots 4° Celsius for more than two years, leaving the other three plots unheated to serve as controls.

They monitored soil respiration three different ways over the course of the experiment. Each plot had an automated chamber that measured the flux of carbon at the surface every half hour. In addition, one day each month, Hicks Pries and the team measured surface carbon fluxes at seven different locations at each plot.

A third method probed the all-important underground realm. A set of stainless steel “straws” was installed below the surface at each plot. The scientists used the straws to measure CO2 concentrations once a month at five depths between 15 and 90 centimeters. By knowing these CO2 concentrations and other soil properties, they could model the extent to which each depth contributed to the amount of CO2 released at the surface.

Related Article: As Temperatures Rise, Soil Will Relinquish Less Carbon to the Atmosphere than Currently Predicted

They discovered that, of the 34 to 37 percent increase in CO2 released at the three warmed plots, 40 percent of this increase was due to CO2 that came from below 15 centimeters. They also found the sensitivity of soil to warming was similar across the five depths.

The scientists say these findings suggest the degree to which soil organic carbon influences climate change may be currently underestimated.

“There’s an assumption that carbon in the subsoil is more stable and not as responsive to warming as in the topsoil, but we’ve learned that’s not the case,” says Torn. “Deeper soil layers contain a lot of carbon, and our work indicates it’s a key missing component in our understanding of the potential feedback of soils to the planet’s climate.”