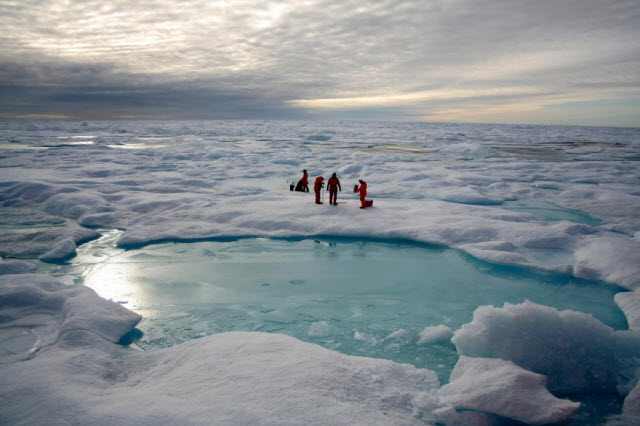 Historic changes to Antarctic sea ice could be unravelled using a new technique pioneered by scientists at Plymouth University.

It could also potentially be used to demonstrate past alterations to glaciers and ice shelves caused by climatic changes, a study published in Nature Communicationssuggests.

The new method builds on an existing technique, also developed by Plymouth University over the last 10 years, which identified a means by which scientists could measure changes to sea ice in the Arctic.

That has already led scientists to reveal periods when the Arctic was previously ice free during summers, and when sea ice first expanded to is modern extent.

Simon Belt, Professor of Chemistry at Plymouth University and lead author on the study, said: "In addition to allowing us to unlock historical changes to Antarctic sea ice, our new method also has the potential to provide further insights into other critical climatic features that may have changed in the past. Indeed, sea ice around the Antarctic coastline is strongly influenced by nearby glaciers and ice shelves, both of which contribute to increased global sea level when they melt. Therefore, our new approach may also permit a much broader spectrum of climatic changes to be unravelled in the future."

The previous technique is based on the presence of IP25 (ice proxy with 25 carbon atoms), a lipid chemical made solely by microalgae that live in the bottom of Arctic sea ice. When the ice melts, the algae and its lipids fall into the sediments which can be recovered, dated and analysed.

IP25 does not exist in the Antarctic, but scientists from Plymouth - working with colleagues from Hanyang University, the Korea Polar Research Institute, the British Antarctic Survey and Isoprime Limited - have discovered a related chemical in the Southern Ocean.

Analysis of surface sediments covering different regions of Antarctica - including the Weddell Sea, the Antarctic Peninsula, the Bellingshausen Sea and the Ross Sea - showed the presence of IPSO25 (ice proxy for the Southern Ocean with 25 carbon atoms) in nearly all cases.

Its source, Berkeleya adeliensis, is a widespread and commonly occurring constituent of microalgae inhabiting Antarctic sea ice, which explains why IPSO25 is so common in the sediments.

The paper concludes: "The identification of IPSO25 in the Antarctic sea ice diatom Berkeleya adeliensis likely ensures that future interpretations of the sedimentary occurrence of this sea ice proxy can be made with greater confidence and in more detail. Thus, in addition to representing a qualitative measure of the past occurrence of Antarctic landfast ice during late spring/summer, our findings indicate that variability in sedimentary IPSO25 potentially provides further insights into changes to ice shelf and glacial melt processes in long-term records."