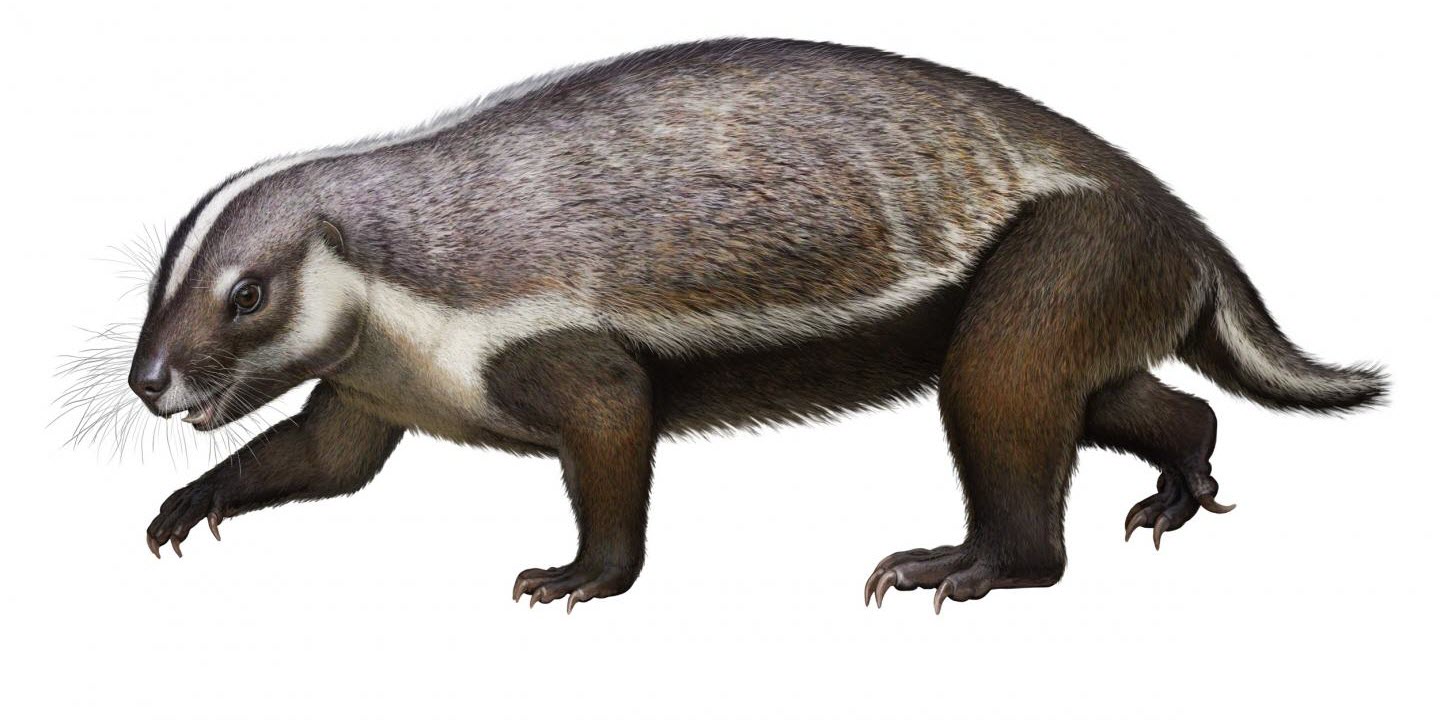 New research published Dec. 18 in the Journal of Vertebrate Paleontology describes a bizarre 66 million-year-old mammal that provides profound new insights into the evolutionary history of mammals from the southern supercontinent Gondwana—recognized today as Africa, South America, Australia, Antarctica, the Indian subcontinent, and the Arabian Peninsula.

Named Adalatherium, which, translated from the Malagasy and Greek languages means "crazy beast," it is described based on a nearly complete, exquisitely preserved skeleton, the most complete for any mammal yet discovered in the southern hemisphere prior to the extinction of the dinosaurs.

The research, carried out over 20 years, demonstrates that Adalatherium was a "giant" relative to the mostly shrew- or mouse-sized mammals that lived during the Cretaceous period.

Its "bizarre" features include more trunk vertebrae than most other mammals, muscular hind limbs that were placed in a more sprawling position (similar to modern crocodiles) coupled with brawny sprinting front legs that were tucked underneath the body (as seen in most mammals today), front teeth like a rabbit and back teeth completely unlike those of any other known mammal, living or extinct, and a strange gap in the bones at the top of the snout.

A team of 14 international researchers led by Dr. David Krause (Denver Museum of Nature & Science) and Dr. Simone Hoffmann (New York Institute of Technology) published the comprehensive description and analysis of this opossum-sized mammal that lived among dinosaurs and massive crocodiles near the end of the Cretaceous period (145-66 million years ago) on Madagascar.

The 234-page monographic treatment, consisting of seven separate chapters, is part of the prestigious Society of Vertebrate Paleontology (SVP) Memoir Series, a special yearly publication that provides a more in-depth treatment of the most significant vertebrate fossils. Initial announcement of the discovery was made in the journal Nature earlier this year.

Adalatherium, from Madagascar, belongs to an extinct group of mammals known as gondwanatherians, which were first discovered in the 1980s and, until recently, were only represented by a few isolated teeth and jaw fragments. But even those meager remains already indicated that gondwanatherians were very different from other contemporaneous mammals. So many mysteries had surrounded gondwanatherians that it was unclear how they fit into the mammalian family tree.

Now the research team presents the first skeleton for this mysterious group that once roamed much of South America, Africa, Madagascar, the Indian subcontinent, and even Antarctica.

The completeness and excellent preservation of the skeleton of Adalatherium opens new windows into what gondwanatherians looked like and how they lived, but the bizarre features still have the team perplexed.

"Knowing what we know about the skeletal anatomy of all living and extinct mammals, it is difficult to imagine that a mammal like Adalatherium could have evolved; it bends and even breaks a lot of rules," Krause explains.

Although the life-like reconstruction of Adalatherium is superficially similar to a run-of-the-mill badger, its "normality" is only skin deep. Below the surface, its skeleton is nothing short of outlandish.

As Hoffmann puts it, "Adalatherium is simply odd. Trying to figure out how it moved, for instance, was challenging because its front end is telling us a completely different story than its back end."

The strangeness of Adalatherium's skeleton

While its muscular hind legs and big claws on the back feet may indicate that Adalatherium was a powerful digger (like badgers), its front legs were less brawny and are more similar to those of living mammals that can run fast.

The limbs of Adalatherium also indicate that its posture was a hybrid between those of living mammals and more ancient relatives. Its forelimbs were tucked underneath the body (as seen in most mammals today) but its hind limbs were more sprawling (as in crocodiles and lizards).

This is not were the strangeness stops.

The teeth of Adalatherium, reconstructed by employing high-resolution micro-computed tomography and extensive digital modeling, are indicative of herbivory but are otherwise beyond bizarre. 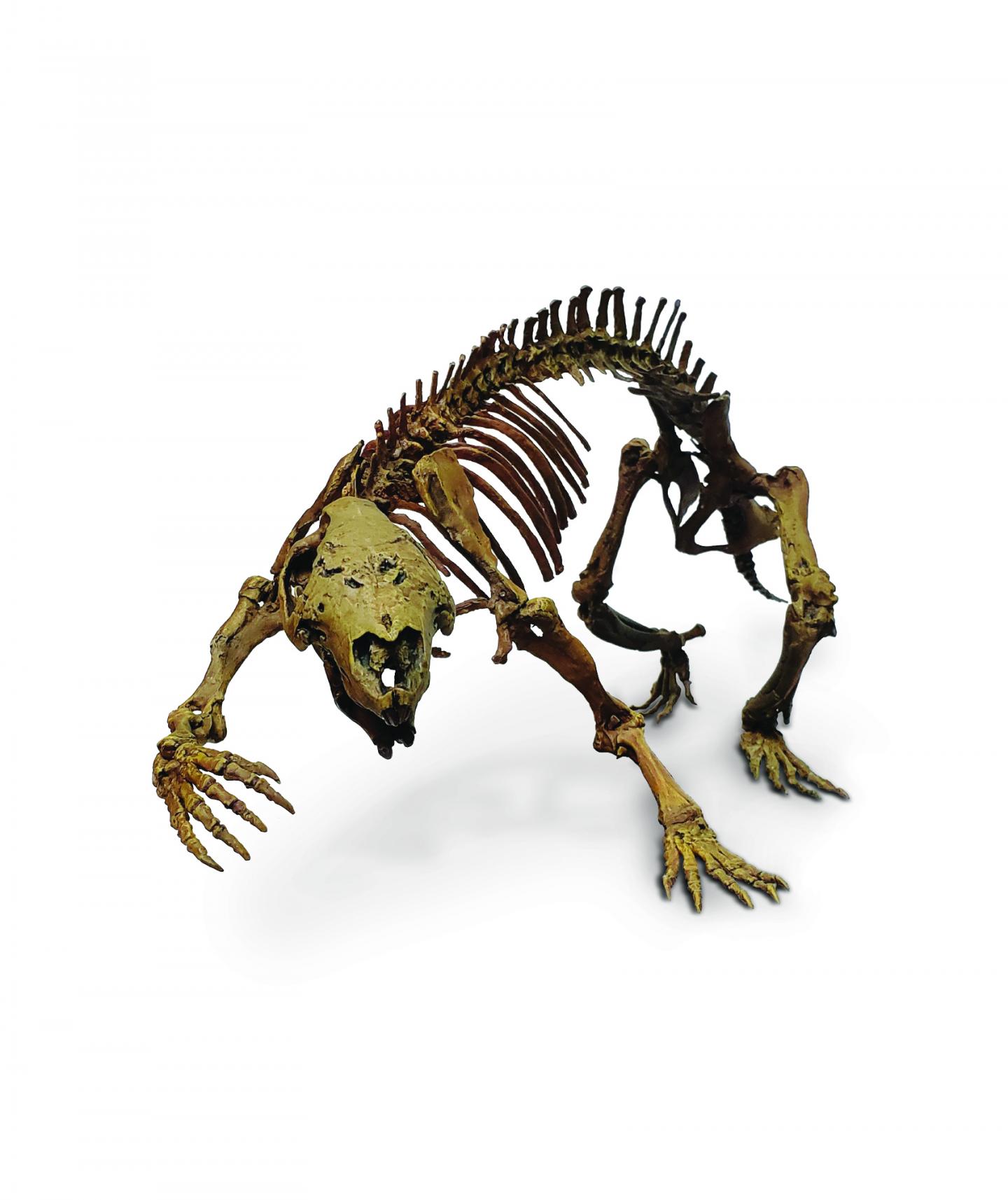 Not only did Adalatherium have rabbit- or rodent-like ever-growing front teeth, but the back teeth are completely unlike those of any other known mammal, living or extinct. If just these teeth had been found, the mystery of what this animal was would likely not have been solved! Added to the seeming chaos is a hole in the top of the snout for which there is simply no parallel.

About the size of a Virginia opossum, the 3.1 kg Adalatherium was very large for its day. While not particularly large by today's standards, it was a giant compared to the mostly shrew- and mouse-sized mammals living in the Cretaceous.

The geological history of Gondwana provides clues as to why Adalatherium is so bizarre.

Adalatherium was found in rocks dated to near the end of the Cretaceous, at roughly 66 million years ago. At this time Madagascar had already been an island separated from Africa for over 150 million years and from the Indian subcontinent for over 20 million years. "Islands are the stuff of weirdness," says Krause, "and there was therefore ample time for Adalatherium to develop its many extraordinarily peculiar features in isolation."

"Adalatherium is an important piece in a very large puzzle on early mammalian evolution in the southern hemisphere, one in which most of the other pieces are still missing," adds Hoffmann.

More than anything, the discovery of Adalatherium underscores how much more remains to be learned from new finds of early mammals in Madagascar and other parts of the southern hemisphere.

- This press release was originally published on the Taylor & Francis Group website. It has been edited for style