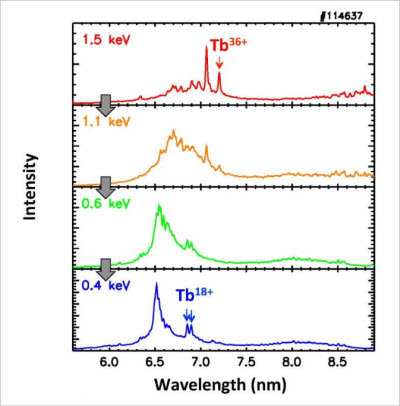 This graph shows changes in the terbium light emission spectrum as a parameter of electron temperature. The peaks with the wavelength of 7.023 nanometer and 6.852 nanometer correspond to Tb36+ and Tb18+ ions, respectively.Image Courtesy of: Chihiro SuzukiProfessors Chihiro Suzuki and Izumi Murakami's research group at the National Institute for Fusion Science, together with Professor Fumihiro Koike of Sophia University, injected various elements with high atomic numbers and produced highly charged ions(*1) in LHD plasmas. By measuring the emission spectrum of the extreme ultraviolet wavelength range, they discovered a new spectral line that had not been observed experimentally in the past. This result is not only significant for basic science research, it also is useful fundamental data for plasma application research such as the development of extreme ultraviolet lithography(*2) light sources. This research result was presented in an invited talk at the 43rd European Physical Society Conference on Plasma Physics, which was held from July 4, 2016, to July 8, 2016.

Among the elements with a high atomic number from the fifth period and higher in the periodic table (for example, tin, gold, and others), there also are many elements whose full aspect of the spectrum is unknown in the plasma. Because high energy is necessary to generate highly charged ions where many electrons were stripped, experimental devices that can generate highly charged ions are limited. Further, there even are ions whose wavelengths of the spectral lines predicted by theory, which are fundamental physical quantities, have not been verified by experiments. Among these elements, tungsten, an impurity which is an important element for the International Thermonuclear Experimental Reactor (ITER), and tin and lanthanide elements as possible candidates for the EUV lithography light sources are included. Further experimental verification of the theoretical model is required for these highly charged ions.

We use the Tracer Encapsulated Solid Pellet (TESPEL)(*3) developed for investigating the behaviors of impurities in high-temperature plasmas. Tin, gadolinium, tungsten, gold, bismuth, and other elements, which are in the fifth and the sixth periods of the periodic table, were encapsulated in pellets, and these pellets were injected into an LHD high-temperature plasma. Using the Grazing Incidence Vacuum Ultraviolet Spectrometer(*4), the light emission of the extreme ultraviolet spectrum (wavelength around 1 - 15 nanometers) was systematically observed. By controlling the heating power after the pellet injection, from the condition of high (>2keV) electron temperature to the hollow condition in which the core temperature becomes zero, we successfully achieved a spectrum in this broad temperature range. As a result, responding to changes in the temperature, we observed dramatic change. And in both the high temperature cases and the low temperature cases the dominant highly charged ion spectral lines were observed (Figure 1). Among these, regarding the spectral lines of terbium, holmium, and thulium (atomic numbers 65, 67, and 69), these were confirmed experimentally for the first time in the world. There are spectral lines that well match wavelengths theoretically predicted and spectrum lines that slip slightly, and these are useful data for the validation of theoretical calculations.

These research results, in discovering new spectral lines that had not been experimentally observed until now, are significant not only for fundamental research, they also may be significant even for presenting fundamental directions for some applied plasma research. From this research, two-thirds of the elements from atomic number 50 through atomic number 83 have been investigated in the LHD, and a systematic experimental database has been compiled. Among these elements, research is advancing regarding tin, gadolinium, terbium, and other elements as plasma light sources for use in EUV lithography for next generation conductors. Further, gold and bismuth are becoming candidates for light source materials for high-contrast bio-microscopes that use the so-called water window range(*5). Tungsten, as a wall material for ITER, is required for understanding the light-emission mechanism of ions in a plasma. The experiment database gained from this research will offer fundamental data helpful for improving the accuracy of simulations.

Explanation of Terminology: (*1) Highly charged ions: Ions where many electrons are stripped from neutral atoms. These exist in high-temperature plasma such as fusion plasma and the solar corona. Because of strong Coulomb force from the nucleus those ions show different characteristics from neutral atoms or ions with low charges.

(*3) Tracer Encapsulated Solid Pellet (TESPEL): This was developed at the National Institute for Fusion Science in order to understand the behavior of impurities in a high-temperature plasma. Inside the hollow sphere made of polystyrene is a solid object impurity inserted as a pellet. The TESPEL is injected into a plasma using an injection device. The impurity is injected directly into the plasma near the core.

(*4) Grazing Incidence Vacuum Ultraviolet Spectrometer: A spectrometer used in wavelength ranges of approximately one to fifteen nanometers that are not transmissive in the air. A device that separates light into each wavelength is generally called a spectrometer. The device has this name because in this wavelength range the device is in a vacuum and the light must be introduced at an extremely shallow angle.

(*5) Water window: The range of a wavelength from 2.3 to 4.5 nanometers located between the absorption edges of characteristic x-rays of oxygen and carbon. It is called this because the light in this range is opaque with regard to the proteins that come primarily from oxygen, however, regarding water, it is transparent. Because the living organism is primarily composed of proteins and water, if we use light in this range, then it is thought that living organisms can be easily observed by the high contrast. The development of high-efficiency light sources for use in microscopes is required.