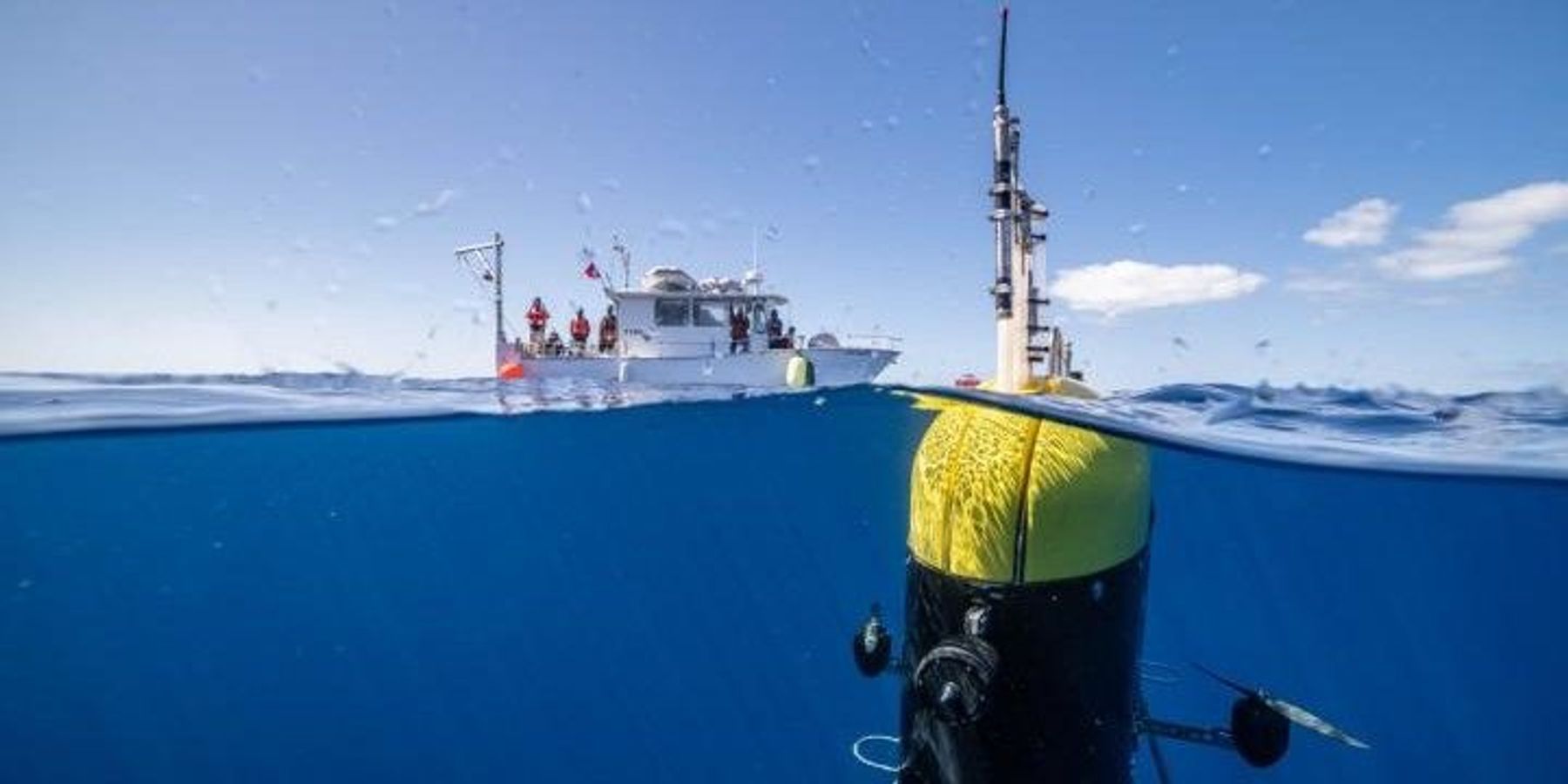 Mesobot, an underwater robot capable of tracking and recording high-resolution images of slow-moving and fragile zooplankton, gelatinous animals, and particles, is providing researchers with deeper insight into the vast mid-ocean region known as the twilight zone. Photo taken off the coast of Bermuda, March 2021.
Evan Kovacs/©Woods Hole Oceanographic Institution

An innovative underwater robot known as Mesobot is providing researchers with deeper insight into the vast mid-ocean region known as the "twilight zone." Capable of tracking and recording high-resolution images of slow-moving and fragile zooplankton, gelatinous animals, and particles, Mesobot greatly expands scientists' ability to observe creatures in their mesopelagic habitat with minimal disturbance. This advance in engineering will enable greater understanding of the role these creatures play in transporting carbon dioxide from the atmosphere to the deep sea, as well as how commercial exploitation of twilight zone fisheries might affect the marine ecosystem.

"Mesobot was conceived to complement and fill important gaps not served by existing technologies and platforms," said Yoerger. "We expect that Mesobot will emerge as a vital tool for observing mid-water organisms for extended periods, as well as rapidly identifying species observed from vessel biosonars. Because Mesobot can survey, track, and record compelling imagery, we hope to reveal previously unknown behaviors, species interactions, morphological structures, and the use of bioluminescence."

Coauthored by research scientists and engineers from WHOI, Monterey Bay Aquarium Research Institute (MBARI), and Stanford University, the paper outlines the robot's success in autonomously tracking two gelatinous marine creatures during a 2019 research cruise in Monterey Bay. High-definition video revealed a "dinner plate" jellyfish "ramming" a siphonophore, which narrowly escaped the jelly's venomous tentacles. Mesobot also recorded a 30-minute video of a giant larvacean, which appears to be nearly motionless but is actually riding internal waves that rise and fall 6 meters (20 feet). These observations represent the first time that a self-guided robot has tracked these small, clear creatures as they move through the water column like a "parcel of water," said Yoerger.

"Mesobot has the potential to change how we observe animals moving through space and time in a way that we've never been able to do before," said Kakani Katija, MBARI principal engineer. "As we continue to develop and improve on the vehicle, we hope to observe many other mysterious and captivating animals in the mid-waters of the ocean, including the construction and disposal of carbon-rich giant larvacean 'snot palaces.'"

Packaged in an hydrodynamically efficient yellow case, the hybrid robot is outfitted with a suite of oceanographic and acoustic survey sensors. It may be piloted remotely through a fiberoptic cable attached to a ship or released from its tether to follow pre-programmed missions or autonomously track a target at depths up to 1,000 meters (3,300 feet). This autonomous capability will one day enable Mesobot to follow a target animal for over 24 hours without human intervention, which is enough time to observe its migration from the mid-water twilight zone to the surface and back. Future studies with Mesobot could provide researchers with valuable insight into animal behavior during diel vertical migration, known as "the greatest migration on Earth" because of the vast number and diversity of creatures that undertake it each night.

"By leveraging the data we've collected using Mesobot, and other data that we've been curating for 30-plus years at MBARI, we hope to integrate smarter algorithms on the vehicle that uses artificial intelligence to discover, continuously track, and observe enigmatic animals and other objects in the deep sea," Kakani said.