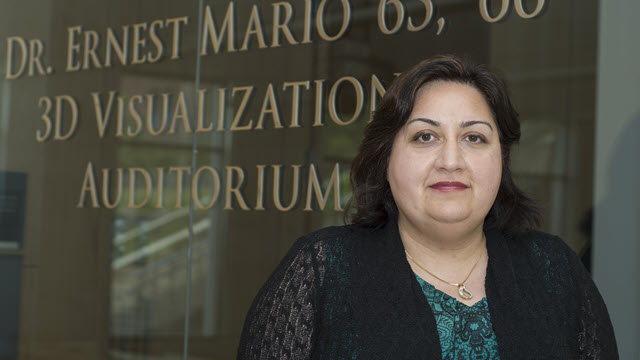 URI Professor Fatemeh Akhlaghi is part of a team working to develop a novel medication to treat alcohol use disorderCredit: URI photo/Nora Lewis

Alcohol abuse is among the leading causes of preventable death in the United States, killing more than 88,000 people a year, according to the Centers for Disease Control. That total is higher than the combined death tolls of HIV/AIDS, gun violence, and car crashes. Despite this, current medications are not highly effective in addressing alcohol abuse.

A University of Rhode Island College of Pharmacy professor is working to change that, with a new clinical trial starting soon. Fatemeh Akhlaghi, the Ernest Mario Distinguished Chair in Pharmaceutics, is part of a team working to develop a novel medication to treat alcohol use disorder, the term scientists and health practitioners use.

Funded by a $1.65 million grant from the National Center for Advancing Translational Sciences, a branch of the National Institutes of Health (NIH), the URI team is testing the safety and efficacy of a drug originally developed by Pfizer to treat obesity and diabetes. The grant formalizes a partnership among Akhlaghi, Pfizer and Dr. Lorenzo Leggio, chief of the Section on Clinical Psycho-neuroendocrinology and Neuro-psychopharmacology, an NIH laboratory funded by the National Institute on Alcohol Abuse and Alcoholism and the National Institute on Drug Abuse.

The drug focuses on ghrelin, a peptide with 28 amino acids that stimulates appetite and food intake. Known as “the hunger hormone,” ghrelin levels and feelings of hunger increase in tandem. In those with alcohol use disorder, higher concentrations of ghrelin are associated with higher alcohol craving and consumption. The researchers believe that an oral medication that blocks ghrelin may help stave off cravings for alcohol. Initial findings have shown positive results in lab rats and in 12 patients who volunteered for a study at NIH. The result of this study was published last month in the journal Molecular Psychiatry.

“Addictions share similar pathways in the brain—food addiction, alcohol addiction, drug addiction. If this drug can block the ghrelin receptor, even if you have high ghrelin level, your ghrelin receptors become numb, and do not respond to the hunger signal,” said Akhlaghi, co-principal investigator on the study. “In 12 patients, there was a statistically significant reduction in alcohol craving and food craving. The main outcome was that the drug was safe and well-tolerated, did not affect alcohol pharmacokinetics, and that there was a significant dampening of the effect of ghrelin.”

“The drugs that are available to treat alcohol use disorder either came from opioids or other drugs that make you have an aversive effect if you drink, and each of them has only small effects,” Akhlaghi said. “The study with the 12 patients shows potential success, although the results are clearly very preliminary and in need for replication. In the new phase, we are looking at the efficacy of the drug. We cannot say this is a cure; we can say it is a promising therapy.”