Near infrared (NIR) is an analytical technique used in a variety of applications, from drug tablet manufacturing to detecting counterfeit products. It can also tell you where the bodies are buried. 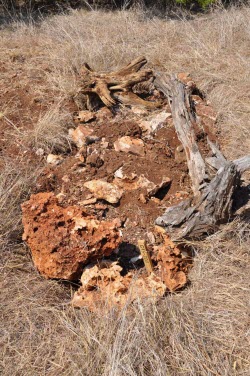 Studies have shown that, used remotely, NIR allows crime scene investigators to distinguish hidden graves from their surroundings.Photo courtesy of Texas State University's Forensic Anthropology Research FacilityRecently, researchers have been experimenting with NIR on the forensic science side of things, as a means to uncover hidden graves, such as those of homicide victims or even the mass graves of victims of attempted genocide. Studies have shown that NIR allows crime scene investigators to distinguish graves from their surroundings.

Currently, Marilyn Isaacks, a recent graduate of Texas State University’s anthropology program, has been looking into how drones and other remotely controlled aircraft can be combined with NIR to track down hidden remains on the surface.

As a body decomposes, it introduces nutrients to the soil, creating a concentrated area, or “island,” of fertility known as a cadaver decomposition island (CDI). Isaacks is researching how such CDIs show up in the NIR spectrum and how time effects how well they show up on that spectrum. Her current study is exploring how long NIR cameras mounted on unmanned aerial systems last and their usefulness in locating human remains.

Based on the studies so far, remote sensing with NIR has proven to be much safer and quicker than sending personnel into the field to comb forests and other terrain for hidden remains.

If you’re interested in learning more about UAV-mounted NIR to detect hidden human remains, be sure to check out Isaacks’ webinar now available on demand