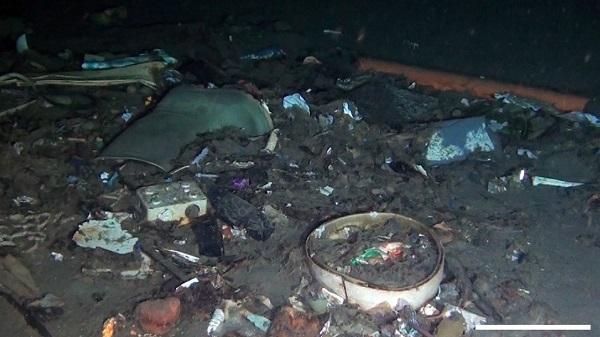 The Messina Strait, a submarine bridge separating the island of Sicily from the Italian Peninsula, is the area with the largest marine litter density worldwide—more than a million objects per square kilometer in some parts—as reported in a new review paper published in the journal Environmental Research Letters.

Also, over the next 30 years, the volume of rubbish in the sea could surpass three billion metric tons (Mt), as cited in the study, whose corresponding authors are the experts Miquel Canals, from the Faculty of Earth Sciences of the University of Barcelona (UB), and Georg Hanke from the European Commission's Joint Research Centre (JRC), where scientists carry out research in order to provide independent scientific advice and support to EU policies.

Led by the University of Barcelona, this paper gathers the results of the scientific meeting on macrolitter that took place in May 2018, promoted by the European Commission's Joint Research Centre (JRC) and the German Alfred Wegener Institute (AWI). A team of 25 scientists from across the world treated issues such as data needs, methodologies, harmonization, and needs for further development.

The study provides a synthesis of current knowledge on human-sourced materials lying on the seafloor and goes through the methodologies to improve future studies, "highlighting the need to understand litter occurrence, distribution, and quantities in order to provide insight for appropriate (policy) measures," notes Georg Hanke, who adds that "the paper also shows the need to employ new methodologies—i.e. imaging approaches—to cover areas that had not been considered previously, and provides tools to enable quantitative assessments such as those under the EU Marine Strategy Framework Directive (MSFD)."

Among other signatories of the article are experts from the University of Açores (Portugal), Alfred Wegener Institute (Germany), Utrecht University (Netherlands), the Norwegian Institute of Marine Research (Norway), the Secretariat of the Barcelona Convention on the protection of the Mediterranean Sea, Monterey Bay Aquarium Research Institute (MBARI, California, United States), the Institute for Global Change of the Japan Agency for Marine Earth Science and Technology Research (JAMSTEC, Japan), IFREMER (France), and Oxford University (United Kingdom), among other institutions.

When litter arrives before humans do

The ocean floor is increasingly accumulating marine litter. Whereas the largest seafloor litter hotspots—likely in the deep sea—are still to be found, plastics have already been found in the deepest point on Earth, the Mariana Trench—at a depth of 10,900 meters—in the Pacific Ocean. In some cases, litter concentrations reach densities comparable to large landfills, experts warn.

Despite the scientific community efforts, "the extent of marine litter on our seas and oceans is not yet fully known. The marine regions most affected by this problem are in landlocked and semi-enclosed seas, coastal bottoms, marine areas under the influence of large river mouths, and places with high fishing activity, even far from land," says professor Miquel Canals, head of the Consolidated Research Group on Marine Geosciences at UB.

Canals highlights that "the level of waste treatment in coastal countries is decisive: the less treatment—or the more deficient—the more waste reaching the ocean, and therefore, the ocean floor, which is a problem that affects specially third-world countries."

The long journey of litter to seafloor 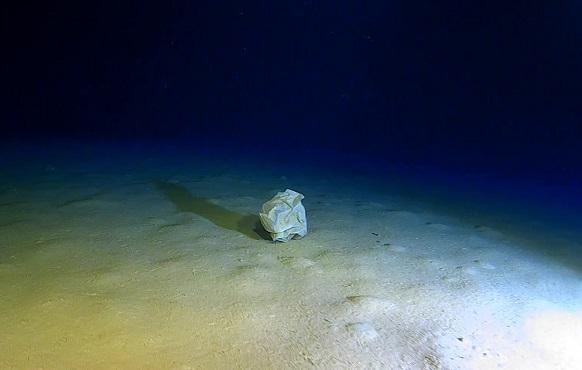 A plastic bag on the bottom of Calypso Deep, at 5109 m, the deepest place in the Mediterranean Sea.
Caladan Oceanic

Plastics, fishing gear, metal, glass, ceramics, textiles, and paper are the most abundant materials in seafloor litter hotspots. Geomorphological features, the submarine relief, and the nature of the seafloor determine the distribution of litter items on the seabed. Ocean dynamics—that is, processes such as dense water cascades, ocean currents and storms—ease the transport and dispersal of litter across the ocean, from coasts to abyssal plains, thousands of meters deep. However, these factors do not occur in all ocean ecosystems and also vary over time and in intensity where they take place.

Due to a gravitational effect, light waste is usually transported along and into marine regions where dense currents flow —i.e. submarine canyons and other submarine valleys—and where flow lines concentrate, such as nearby large submarine reliefs. Finally, materials transported by ocean dynamics accumulate in depressions and quiet marine areas.

The properties of materials dumped in the marine environment also affect their dispersion and accumulation on the ocean floor. It is estimated that 62 percent of the dirt accumulated on seabeds is made of plastics, "which is relatively light and easy to transport over long distances. On the other hand, heavy objects such as barrels, cables, or nets are usually left at the point where they initially fell or got entangled," says Canals.

Litter is a new threat to marine biodiversity. It is already known that nearly 700 marine species, 17 percent of which are on the International Union for Conservation of Nature's red list, have been affected by this problem in several ways. Seabed entangled fishing gear can cause serious ecological impacts for decades because of ghost fishing. The slow decomposition of fishing nets—usually made of high-strength polymers—aggravates the detrimental effects of this type of waste on the marine ecosystem.

Other human activities such as dredging, trawling, etc., trigger secondary dispersal by remobilization and fragmentation of seafloor litter. In addition, seabed waste concentrations can easily trap other objects, thus generating larger and larger litter accumulations. It is paradoxical that waste may increase the heterogeneity of the substrate, which can benefit some organisms. Some xenobiotic compounds—pesticides, herbicides, pharmaceuticals, heavy metals, radioactive substances, etc.—associated with litter are highly resistant to degradation and endanger marine life. However, the extent of the effects of litter on the habitats of the vast expanses of the deep ocean still is a chapter to be written by the scientific community.

"In the Mediterranean Sea," says Miquel Canals, "seafloor marine litter already is a serious ecological problem. In some places of the Catalan coast, there are large accumulations of waste. When there are strong storms, such as Gloria, in January 2020, waves throw this waste on the beach. Some beaches in the country were literally paved with rubbish, thus showing to which extent the coastal seabed is littered. There are also noticeable concentrations of waste in some submarine canyons outside Catalonia."

Beach litter and floating garbage can be identified and monitored by simple, low-cost methods. In contrast, the study of seafloor litter is a technological challenge, the complexity of which increases with water depth and remoteness of the marine area to be investigated. The study reviews both methodologies allowing physical sampling of seafloor waste and in situ observations.

New technologies have enabled major advances in the study of the environmental status of the seabed worldwide. The use of unmanned remotely operated vehicles (ROVs) is critical for in situ observation, despite the limitations for physical sampling. Classic technologies such as bottom trawling also have limitations, as they do not allow determining the precise location of the bottom-sampled objects. "Future methodologies should aim at easing the comparison of scientific data from different places. It should also be easier for observation and sampling efforts to generate consistent data sets, something that we are still far from achieving," says Canals.

Avoiding excess waste generation to take care of the planet

Knowledge and data about seafloor litter are necessary for the implementation of the Marine Strategy Framework Directive (MSFD) and other international policy frameworks, including global agreements. The publication shows how research on seafloor macrolitter can inform these international protection and conservation frameworks to prioritize efforts and measures against marine litter and its deleterious impacts.

The authors warn about the need to promote specific policies to minimize such a serious environmental problem. The study also addresses the debate on the removal of litter from the seabed, a management option that should be safe and efficient. In relation to this, the Joint Research Centre (JRC) is co-chairing the MSFD Technical Group on Marine Litter, which provides an information exchange and discussion platform to provide agreed guidance for MSFD implementation.

"Marine litter has reached the most remote places in the ocean, even the least- (or never)-frequented by our species and not yet mapped by science," says Canals. "In order to correct something bad, we must attack its cause. And the cause of the accumulation of waste on the coasts, seas and oceans, and all over the planet, is the excess waste generation and spillage in the environment, and poor or insufficient management practices. As humans, we have little or no care at all to prevent litter from accumulating everywhere."

- This press release was originally published on the UB website. It has been edited for style