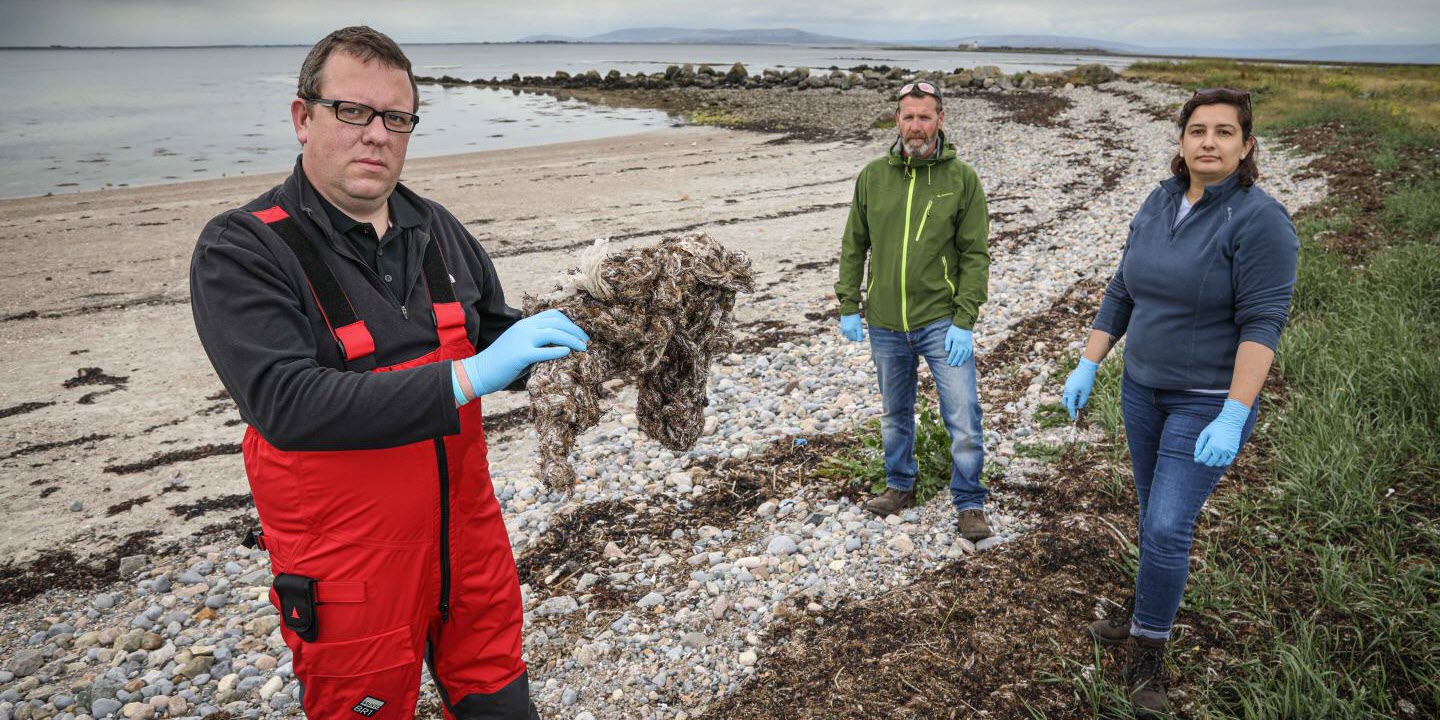 Researchers from Earth and Ocean Sciences and the Ryan Institute at National University of Ireland (NUI) Galway have carried out a study on the contribution of widely flushed personal care textile products (wet wipes and sanitary towels) to the ocean plastic crisis.

Dr. Liam Morrison led the study, which showed that sediments adjacent to a wastewater treatment plant are consistently strewn with white microplastic fibers that are comparable to those from commercially available consumer sanitary products (wet wipes and sanitary towels). The article has been published in the international journal Water Research and was co-authored by NUI Galway PhD student Ana Mendes and Maynooth University graduate Oisín Ó Briain.

In most studies to date, white fibers are likely underestimated, because of the commonly-used filtration procedure to capture microplastic fibers as filters are commonly white, making visual identification of microscopic white fibers against a white background difficult. This is significant given the global growth of non-woven synthetic fiber products and their ubiquity in wastewater.

"Our university has made sustainability a strategic priority, and for the world to address climate change, we have a duty to examine the behavior of individuals and corporations that can help our planet," said NUI Galway professor and president Ciarán Ó hÓgartaigh. "This research highlights the need for us to adapt our behaviors and tackle the ubiquity of plastic in so many products."

An urban rural gradient involving three locations from Galway City (close to Mutton Island and adjacent to a wastewater treatment plant) to counties Clare (Bell Harbour) and Mayo (Bellacragher) were investigated in this study. The total number of fibers found near Mutton Island was 6,083 microplastics fibrrs per kilogram of sediment, while the rural sites had much lower levels (Bell Harbour, 1,627 and Bellacragher 316). The total number of white fibers was 5,536, 788, and 265 per kilogram of sediment for Mutton Island, Bell Harbour, and Bellacragher respectively. Incredibly, 91 percent of microplastic fibers at Mutton Island are likely derived from wet wipes and sanitary towels.

"COVID-19 may have brought its own challenges for the oceans including the increased use of disinfectant wipes during the pandemic which potentially may end up as microplastic fibers in the sea," said Morrison, who is from the Earth and Ocean Sciences and Ryan Institute at NUI Galway and was the lead researcher of the study. "It is widely known that microplastics can act as vectors for contaminants including bacteria and viruses and are potentially harmful for public health and marine life."

The nearby intertidal zone at Mutton Island is prone to the accumulation of high volumes of washed-up sewage-derived debris on a frequent basis. Excessive microplastic loading in sediments in December 2017 was likely induced by heavy precipitation episodes during a southwesterly storm front. Elevated debris loading on this occasion may result from combined sewer overflows, where excessive input of drainage water exceeds wastewater treatment effluent capacity and is released untreated in the overflow. Morrison said: "This was significant in the context of climate change, where we are likely to see increased rainfall events and flooding."

Related Article: Study Suggests Lego Bricks Could Survive in Ocean for Up to 1,300 Years

While most microplastics may be removed by the wastewater treatment process, combined sewage overflows associated with periods of heavy rainfall give rise to the release of sewage waste containing wipes and sanitary towels, impacting on public health and the environment. Combined sewer overflows and the subsequent shoreline deposition of sanitary waste have not previously been thoroughly investigated as a source of white microplastic fibers in the marine environment. The study found that wet wipes and sanitary towels are a source of unaccounted white microplastic fibers in the marine environment and not all flushable wipes are biodegradable. In fact 50 percent of the wipes labeled "flushable" in this study were shown to contain microplastics. The lack of regulation for hygiene and sanitary products results in a failure to identify the plastic composition of these materials. This demonstrates the consequences of misleading labeling of non-woven textile personal care products.

The samples of sanitary-related macro debris (wipes and sanitary towels) collected from the intertidal zone near Mutton Island in Galway City following a heavy rainfall event were mostly comprised of the plastic polyethylene terephthalate (PET), with only a quarter of the samples analyzed presenting as a mix of PET and cellulose, and over 80 percent of the wipes in the shoreline waste were identified as non-flushable due to their polymer composition following the International Water Services Flushability Group and non-woven textile industry guidelines (INDA/EDANA, 2018; IWSFG, 2018).

These products are a consistent feature of global plastic pollution surveys and in comparison, microplastic fibers from clothing are generally colored or multi-colored. To date, the role of these white microplastic fibers as significant components of wastewater effluent remained poorly understood. The quantities of wet wipes washing up on beaches in the UK has increased 400 percent in the last decade (Marine Conservation Society, 2019).

"There is a need for increased public awareness of microplastic pollution in the environment and human behavior should shift away from the inapt disposal of sanitary products down the toilet and instead divert to alternative land-based waste management," Morrison added.