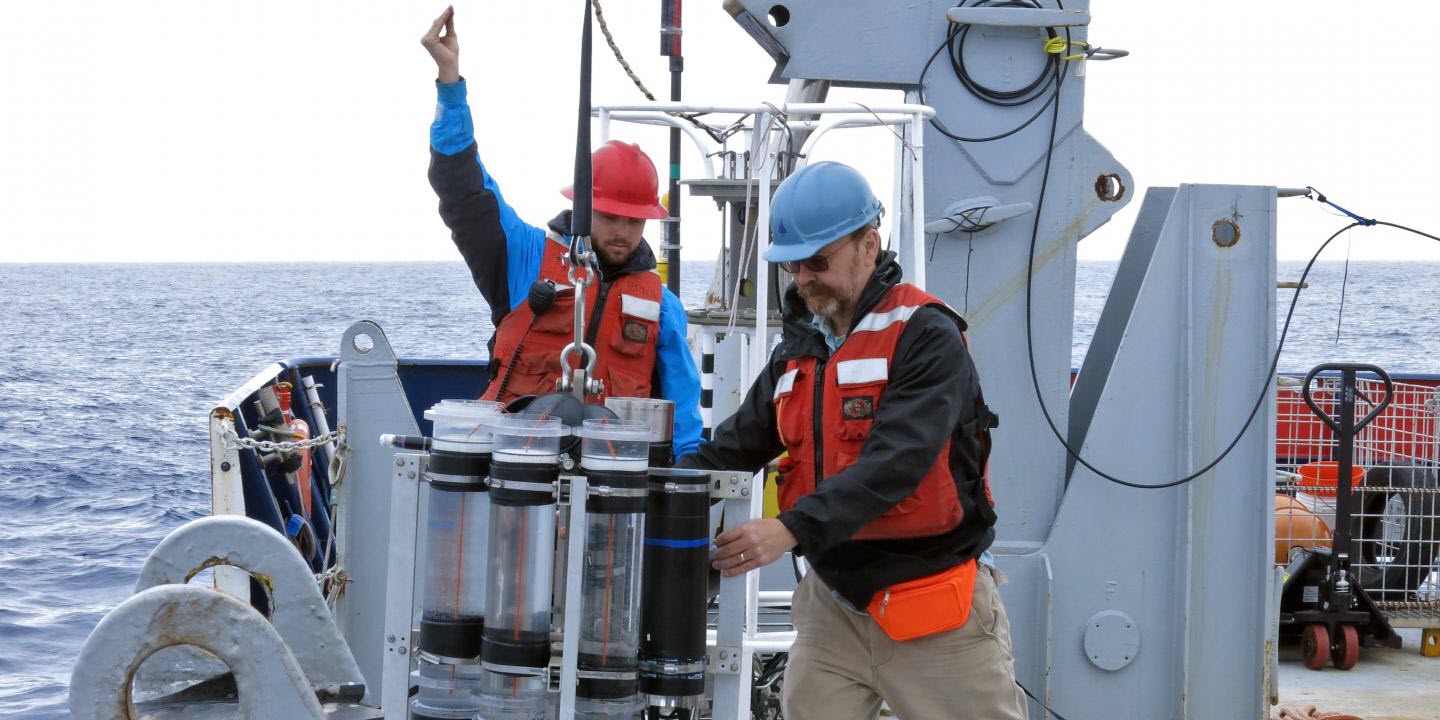 WHOI marine chemist Ken Buesseler (right), one of the authors of the study, deploys a sediment trap used to study the biological carbon pump during a 2018 expedition in the Gulf of Alaska.
Alyson Santoro, University of California Santa Barbara

The ocean plays an invaluable role in capturing carbon dioxide (CO2) from the atmosphere, taking in somewhere between five to 12 gigatons (billion tons) annually. Due to limited research, scientists aren't sure exactly how much carbon is captured and stored—or sequestered—by the ocean each year or how increasing CO2 emissions will affect this process in the future.

A new paper published in the journal Science of the Total Environment from the Woods Hole Oceanographic Institution (WHOI) puts an economic value on the benefit of research to improve knowledge of the biological carbon pump and reduce the uncertainty of ocean carbon sequestration estimates.

Using a climate economy model that factors in the social costs of carbon and reflects future damages expected as a consequence of a changing climate, lead author Di Jin of WHOI's Marine Policy Center places the value of studying ocean carbon sequestration at $500 billion.

"The paper lays out the connections between the benefit of scientific research and decision making," says Jin. "By investing in science, you can narrow the range of uncertainty and improve a social cost-benefit assessment."

Better understanding of the ocean's carbon sequestration capacity will lead to more accurate climate models, providing policymakers with the information they need to establish emissions targets and make plans for a changing climate, Jin adds.

With co-authors Porter Hoagland and Ken Buesseler, Jin builds a case for a 20-year scientific research program to measure and model the ocean's biological carbon pump, the process by which atmospheric carbon dioxide is transported to the deep ocean through the marine food web.

The biological carbon pump is fueled by tiny plant-like organisms floating on the ocean surface called phytoplankton, which consume carbon dioxide in the process of photosynthesis. When the phytoplankton die or are eaten by larger organisms, the carbon-rich fragments and fecal matter sink deeper into the ocean, where they are eaten by other creatures or buried in seafloor sediments, which helps decrease atmospheric carbon dioxide and thus reduces global climate change.

Rising carbon dioxide levels in the atmosphere, a result of human activity such as burning fossil fuels, warms the planet by trapping heat from the sun and also dissolves into seawater, lowering the pH of the ocean, a phenomenon known as ocean acidification. A warmer, more acidic ocean could weaken the carbon pump, causing atmospheric temperatures to rise—or it could get stronger, with the opposite effect.

"When we try to predict what the world is going to look like, there's great uncertainty," says Buesseler, a WHOI marine chemist. "Not only do we not know how big this pump is, we don't know whether it will remove more or less carbon dioxide in the future. We need to make progress to better understand where we're headed, because the climate affects all of humanity."

Buesseler added that efforts like WHOI's Ocean Twilight Zone initiative and NASA's EXport Processes in the global Ocean from RemoTe Sensing (EXPORTS) program are making important strides in understanding the ocean's role in the global carbon cycle, but this research needs to be vastly scaled up in order to develop predictive models such as those used by the Intergovernmental Panel on Climate Change (IPCC). Current IPCC models do not account for change in the ocean's ability to take up carbon, which Buesseler said affects their accuracy.

Though the paper's assessment doesn't account for the cost of a global research program, Buesseler said that investment would be a small fraction of the $500 billion expected benefit. The authors warn that this savings could also be viewed as a cost to society if the research does not lead to policy decisions that mitigate the effects of climate change.

"Just like a weather forecast that helps you decide whether or not to bring an umbrella, you use your knowledge and experience to make a decision based on science," Jin says. "If you hear it's going to rain and you don't listen, you will get wet."

- This press release was originally published on the WHOI website