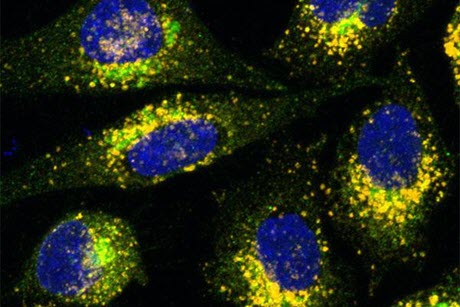 Blood stem cells protect themselves against viruses with structures known as 'interferon-induced transmembrane proteins,' seen here in green. These normally useful proteins are problematic for gene therapy treatments, as they work to keep therapeutic lentiviral vectors from infiltrating cells. Scripps Research scientists found a natural compound that lets down this shield, boosting the success rate of gene delivery.Credit: Image courtesy of the Torbett lab at Scripps ResearchLA JOLLA, CA — Gene therapy has broadened the treatment possibilities for those with immune system deficiencies and blood-based conditions, such as sickle cell anemia and leukemia. These diseases, which once would require a bone marrow transplant, can now be successfully treated by modifying patients' own blood stem cells to correct the underlying genetic problem.

But today's standard process for administering gene therapy is expensive and time-consuming—a result of the many steps required to deliver the healthy genes into the patients' blood stem cells to correct a genetic problem.

In a discovery that appears in the journal Blood, scientists at Scripps Research believe they have found a way to sidestep some of the current difficulties, resulting in a more efficient gene delivery method that would save money and improve treatment outcomes.

"If you can repair blood stem cells with a single gene delivery treatment, rather than multiple treatments over the course of many days, you can reduce the clinical time and expense, which removes some of the limitations of this type of approach," says Bruce Torbett, PhD, associate professor in the Department of Immunology and Microbiology, who led the research.

Torbett and his team became interested in the unique chemical properties of resveratrol and similar types of molecules and wondered if they could enable viral vectors, used in gene therapy to deliver genes, to enter blood stem cells more easily. This would be momentous because stem cells—and in particular, self-renewing hemopoietic stem cells—have many barriers of protection against viruses, making them challenging for gene therapy to infiltrate.

"This is why gene therapy of hemopoietic stem cells has been hit-or-miss," Torbett says. "We saw a way to potentially make the treatment process significantly more efficient."

The gene therapy treatment process currently requires isolating a very small population of hemopoietic stem cells from the blood of patients; these young cells can self-renew and give rise to all other types of blood cells. Therapeutic genes are then delivered to these cells via specially engineered viruses, called "lentiviral vectors," which leverage viruses' natural knack for inserting new genetic information into living cells.

However, hemopoietic stem cells are highly resilient to viral attacks. They protect themselves with structures known as interferon-induced transmembrane (IFITM) proteins, which intercept lentiviral vectors. Because of this, it can take many attempts—and a large quantity of expensive gene therapy vectors—to successfully delivery genes into hemopoietic stem cells, Torbett says.

Torbett and his team found that by adding the resveratrol-like compound, caraphenol A, to human hemopoietic stem cells, along with the lentiviral vector mix, the cells let down their natural defenses and allowed vectors to enter more easily. Once the treated stem cells were placed into mice, they divided and produced blood cells containing the new genetic information.

Another key benefit of the approach is time: If gene delivery treatment of blood stem cells can be accomplished in less time, the cells can be re-administered to the patient sooner. This not only makes treatment more convenient for the patient, but it helps to ensure the stem cells don't lose their self-renewing properties, Torbett says. The longer stem cells exist outside of the body and are manipulated, the more likely it is they will lose their ability to self-generate and ultimately correct disease.

Torbett and his team are continuing to study the underlying reasons for stem cells' inherent resistance to genetic modification, with the goal of further improving treatment efficiency and reducing cost. Because many of the diseases treatable with gene therapy affect children, Torbett says he feels a special urgency to advance this discovery from the lab into the clinic.