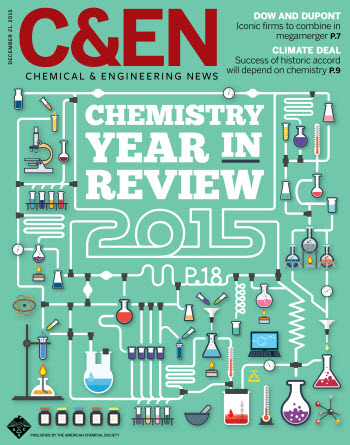 Image courtesy of the American Chemical SocietyFrom a critical international climate pact to corporate mega mergers, 2015 was packed with history-making events in the chemistry world sure to have an impact far into the future. Chemical & Engineering News (C&EN), the weekly newsmagazine of the American Chemical Society, highlights the year's biggest moments in chemistry research, policy and business.

On the research front, C&EN singled out a handful of ground-breaking developments to feature such as flexible electronics that can potentially be injected into the brain and the isolation of a new class of promising antibiotics. In the policy realm, the year was capped by the long-anticipated Paris climate deal, signed by representatives from 195 nations in an effort to avoid the worst predicted effects of climate change. One of the biggest business stories also broke at the year's end: chemical giants Dow and DuPont announced their $130 billion merger.

Other top-ranking stories involved more slow-burning issues such as the continued pressure on industries to clean up hydraulic fracturing methods and reduce neonicotinoid use. On a lighter note, chemists finally got their own emoji, or "chemoji."