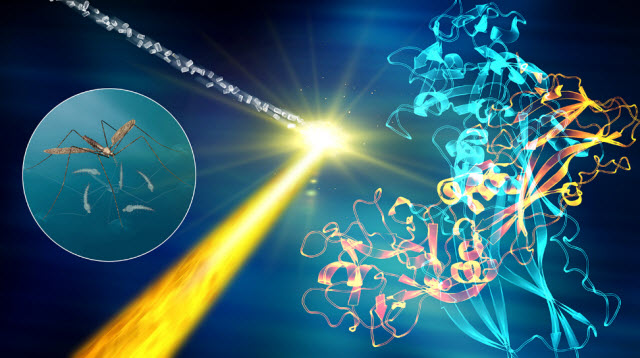 Structural biology research conducted at the U.S. Department of Energy’s (DOE) SLAC National Accelerator Laboratory has uncovered how small insecticidal protein crystals that are naturally produced by bacteria might be tailored to combat dengue fever and the Zika virus.

The larvicide is currently ineffective against the Aedes mosquitos that transmit Zika and dengue fever, and therefore not used to combat these species of mosquitos at this time. The new information provides clues to how scientists could design a composite toxin that would work against a broader range of mosquito species, including Aedes.

“A more detailed look at the proteins’ structure provides information fundamental to understanding how the crystals kill mosquito larvae,” said Jacques-Philippe Colletier, a scientist at the Institut de Biologie Structurale and lead author on the paper. “This is a prerequisite for modifying the toxin to adapt it to our needs.”

BinAB is inactive in the crystalline state and does not work on contact. For the crystals to dissolve, they must be exposed to alkaline conditions, such as those in a mosquito larva’s gut. The binary protein is then activated, recognized by a specific receptor at the surface of cells and internalized.

Because Aedes larvae can evade one of these steps of intoxication, they are resistant to BinAB. These larvae do not express the correct receptors at the surface of their intestinal cells. Many other insect species, small crustaceans and humans also lack these receptors, as well as alkaline digestive systems.

“Part of the appeal is that the larvicide’s safe because it’s so specific, but that’s also part of its limitation,” said Michael Sawaya, a scientist at the UCLA-DOE Molecular Biology Institute and co-author on the paper.

For public health officials who want to prevent mosquito-borne disease, BinAB could also offer an alternative for controlling certain species of mosquitos that have begun to show resistance to other forms of chemical control.

The research team already knew the larvicide is composed of a pair of proteins, BinA and BinB, that pair together in crystals and are later activated by larval digestive enzymes.

In the LCLS experiments, they learned the molecular basis for how the two proteins paired with each other – each performing an important, unique function. Previous research had determined that BinA is the toxic part of the complex, while BinB is responsible for binding the toxin to the mosquito’s intestine. BinB ushers BinA into the cells; once inside, BinA kills the cell.

The scientists also identified four “hot spots” on the proteins that are activated by the alkaline conditions in the larval gut. Altogether, they trigger a change from a nontoxic form of the protein to a version that is lethal to mosquito larvae.

Only coarse details were known about the unique three-dimensional structure and biological behavior of BinAB prior to the experiment at LCLS.

“We chose to look at the BinAB larvicide because it is so widely used, yet the structural details were a mystery,” said Brian Federici, professor of entomology at University of California Riverside.

The small size of the crystals made them difficult to study at conventional X-ray sources. So the research team used genetic engineering techniques to increase the size of the crystals, and the bright, fast pulses of light at LCLS allowed the scientists to collect detailed structural data from the tiny crystals before X-rays damaged their samples.

The researchers used a crystallography technique called de novo phasing. This involves tagging the crystals with heavy metal markers, collecting tens of thousands of X-ray diffraction patterns, and combining the information collected to obtain a three-dimensional map of the electron density of the protein.

“This is the first time we’ve used de novo phasing on a crystal of great interest at an X-ray free-electron laser,” said Sebastien Boutet, SLAC scientist.

The technique had so far only been used on test samples where the structure was already known, in order to prove that it would work.

“The most immediate need is to now expand the spectrum of action of the BinAB toxin to counter the progression of Zika, in particular,” said Colletier. “BinAB is already effective against Culex [carrier of West Nile encephalitis] and Anopheles [carrier of malaria] mosquitos. With results of the study, we now feel more confident that we can design the protein to target Aedes mosquitos.”