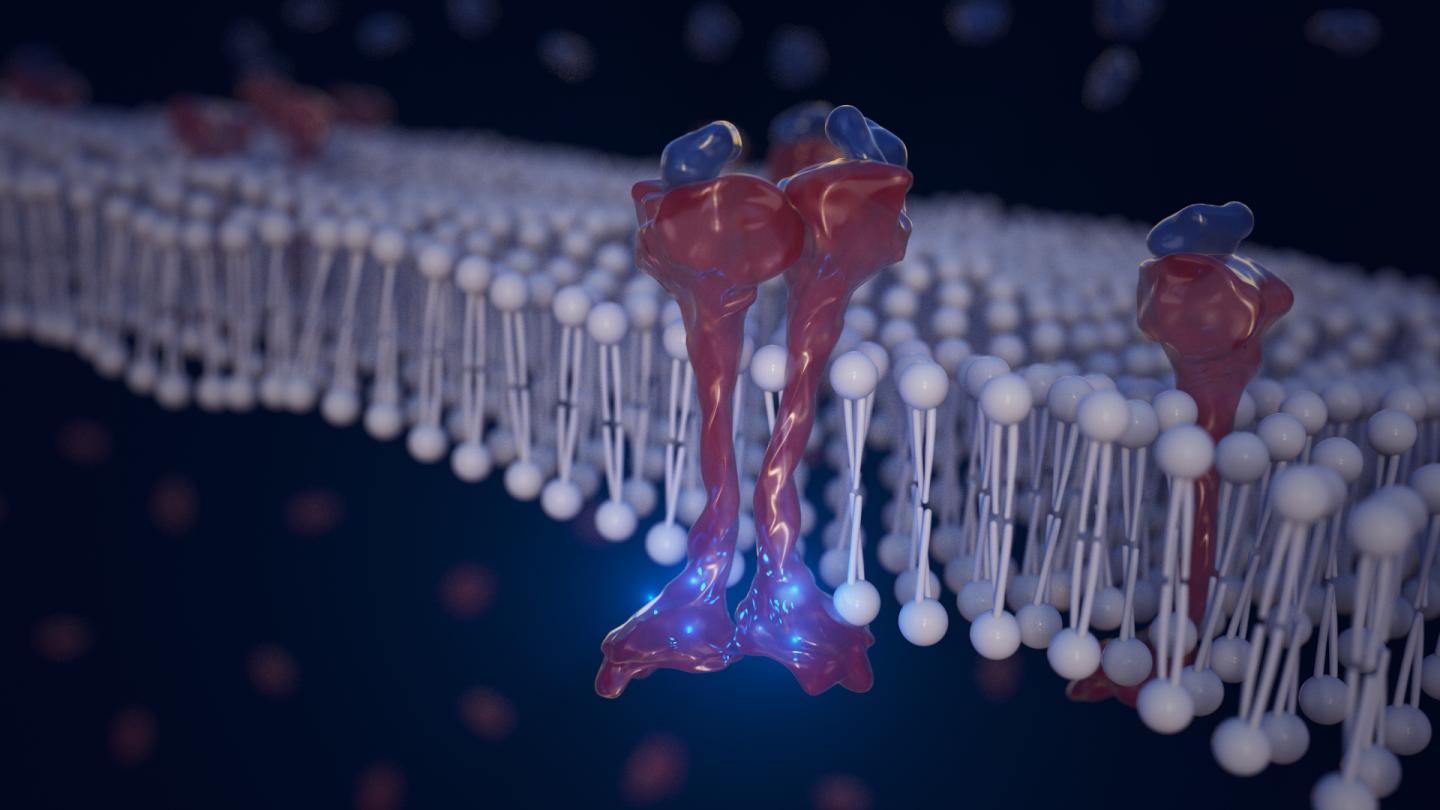 This ERBB4 receptor, a member of the receptor tyrosine kinase family, is of increasing interest for science and medicine. Mutations in ERBB4 have been linked in recent studies to melanoma and lung cancer, and altered expression of ERBB4 has been observed in breast cancer, neuroblastoma, colon cancer, and non-small cell lung cancer, though the receptor has not received suffient study to date. When signaling molecules known as epithelial growth factors (seen in blue) bind with the ERBB4 receptors (red) a cascade of cell signalling events is set in motion. A process known as protein phosphorylation occurs. The phenomenon has been linked with many cellular events including progression to cancer. An experimental drug known as ibrutanib was shown to inhibit the kinase function of ERBB4, potentially blocking this cascade of events.Image Credit: Jason Drees: Biodesign Institute

In recent years, a powerful suite of drugs known as kinase inhibitors have been developed to treat cancer and other diseases. Primary targets of such drugs include a family of receptor tyrosine kinases (RTKs) which protrude from cell surfaces like antennae and can activate cancer-related pathways in virtually all types of cancer when signaling molecules bind with them.

In a new study, researchers at Arizona State University's Biodesign Institute used an innovative method to screen a broad range of kinases for a drug's effectiveness. The compound, known as ibrutinib — an inhibitor of Bruton's tyrosoine kinase (BTK) in white blood cells, was first approved by the FDA in 2013 for the treatment of leukemia.

Using a sophisticated microarray platform invented by Dr. Joshua LaBaer, the new research demonstrates that ibrutinib can also target a little-studied member of the RTK family, known as ERBB4, potentially thwarting the sequence of events leading to progression and growth of other solid tumors. LaBaer is the director of the Biodesign Institute and the Virginia G. Piper Center for Personalized Diagnostics.

Results show that ibrutinib acts as a potent kinase inhibitor for ERBB4, limits growth in human cancer cells in the laboratory, and reduces tumor size in mice. The sensitivity of ERBB4 to ibrutinib is similar to that of BTK, the original target of the drug.

The study presents a novel screening method for searching for new targets of drugs such as kinase inhibitors and demonstrates the potential therapeutic utility of an existing pharmaceutical to selectively target ERBB4, in addition to its original target BTK. (The dysregulation of BTK is associated with uncontrolled proliferation of B cells leading to leukemia, lymphoma and other diseases.)

"We are particularly excited because it demonstrates that the proteins on these arrays are functionally active in a manner that reflects their natural activity and enables us to screen for their responses to selective drugs," said LaBaer. "This now provides a tool that would enable us to look for off target responders to drugs or determine how specific acquired mutations might affect drug response."

The research findings appear in the advanced online edition of the journal Oncogene.

A new type of drug screening

In order to explore ERBB4's subtle behavior, the researchers use a technology known as a protein microarray, which is a microscopic surface displaying many different proteins, each in individual dots. Thus, large numbers of proteins can be simultaneously examined. Using this method, researchers explore the interactions of proteins with other proteins, their binding activities with nucleic acids like DNA and RNA or with factors found in blood, including a broad range of pathogens.

Conventionally, printing proteins on slides has been an inefficient, labor-intensive process, because proteins are delicate, three-dimensional structures, which must fold in just the right ways in order to be functional. However, proteins on conventional protein arrays are typically produced in non-human systems, and elaborate protein purification steps are required, which make it difficult to keep proteins stable over time.

In the current study, a revolutionary technology known as NAPPA (for nucleic acid programmable protein array) is applied. Instead of printing the purified proteins on the microarray slide, NAPPA first prints circular DNA known as plasmids that contain genetic codes for proteins of interest and then synthesizes the target proteins just-in-time on the spot by adding human cell extract for more natural protein folding. Therefore, the NAPPA array can provides a highly functional and efficient system for protein expression and screening.

"You can express functional protein within one and a half hours. That's the cool thing about it," says Dr. Femina Rauf, a lead author of the new study. "We are using the human lysate system to express the proteins, so we expect to see well-folded, functional proteins. We're especially excited because the RTKs are membrane proteins, which are ordinarily challenging to express but are still active here."

Mutations in RTKs are believed to be a driving force in cancer development. A group of four important receptors, EGFR, ERBB2, ERBB3 and ERBB4, known as the ErbB receptor tyrosine kinase family, are activated by signaling molecules known as epithelial growth factors. These specialized molecules play a critical role in a cell's development and maturation.

While EGFR and ERBB2 are already being exploited as important therapeutic targets, and have, (along with ERBB3), received intensive scrutiny, little is known about the fourth member of the RTK family: ERBB4. This receptor is of increasing interest, as mutations in ERBB4 have been linked in recent studies to melanoma and lung cancer, and altered expression of ERBB4 has been observed in breast cancer, neuroblastoma, colon cancer, and non-small cell lung cancer.

Additionally, ERBB4 may play a role in other diseases including amyotrophic lateral sclerosis, as well as neurodevelopmental disorders such as autism and schizophrenia.

"No one has done a systematic study for drugs for ERBB4. Researchers tend to concentrate on EGFR and ERBB2 because these are attractive targets in the cancer field," says Rauf. "Recent reports have found many mutations in ERBB4, especially in lung cancer and in melanoma, suggesting this receptor may play an important role in oncogenesis or the development of cancer," she says.

ERBB4, like its fellow kinase receptor family members, is a membrane protein, with its receptor component protruding out of the cell surface to catch signaling molecules in the extracellular environment, while the intracellular portion of ERBB4 contains a segment called kinase domain as well as residues of tyrosine, an amino acid.

When signaling molecules bind with the extracellular ERBB4 receptor, its kinase domain inside of the cell adds phosphates onto tyrosine residues, triggering a chain reaction of signaling events. The process is known as protein phosphorylation and plays a crucial role in myriad cellular events including cancer progression and proliferation, and this study discovered that ibrutinib can block this process by inhibiting the kinase function of ERBB4.

The study immobilized 108 different protein kinases and 30 non-kinases on the NAPPA slide, including ERBB4 and other RTKs. When the array was exposed to ibrutinib, the drug closely bound with two specific proteins. The first is BTK, the binding protein the drug was originally designed to target. Surprisingly, ibrutinib also bound ERBB4, with similar affinity.

A pair of in vitro tests were used to confirm the activity of ibrutinib on ERBB4. The study results demonstrate, for the first time, NAPPA's power as an unbiased drug-screening platform. Having established ibrutinib as a candidate drug to target ERBB4, the next step was to test it in actual biological settings, first in cell lines overexpressing ERBB4 and finally in mice.

In a number of cell lines, ibrutinib blocked proliferation. Other cells, however, displayed resistance to the drug. By performing RNA sequencing, the group ferreted out patterns of gene expression associated with resistance.

Results showed that cells expressing high levels of WNT5A, an activator of the Wnt pathway, and low levels of DKK1, an inhibitor of the Wnt pathway, were resistant to the kinase-inhibiting drug. In contrast, low WNT5A and high DKK1 expression levels were associated with cell sensitivity to ibrutinib and reduced cell growth, when exposed to the drug. These results are in line with recent large-scale studies, which provide tantalizing clues that one function of WNT5A, a known oncogene, is to confer resistance to certain drugs.

When ibrutinib-sensitive cells expressing high levels of ERBB4 were transferred to mice, ibrutinib was shown to shrink the size of tumors, demonstrating a strong potential of the drug in treating ERBB4-related cancers.

The findings are particularly valuable, as a number of ongoing clinical trials are underway using ibrutinib to treat solid tumors. Overexpression of ERBB4 has been noted in a number of diseases, including triple-negative breast cancer and ovarian cancer. The discovery of an ibrutinib resistance signature will help clinicians interpret their treatment outcomes and assess when ibrutinib is most likely to be successful. The use of ibrutinib, perhaps in conjunction with other drugs targeting pathways of cell resistance, may pave the way for a new arsenal of cancer treatments.