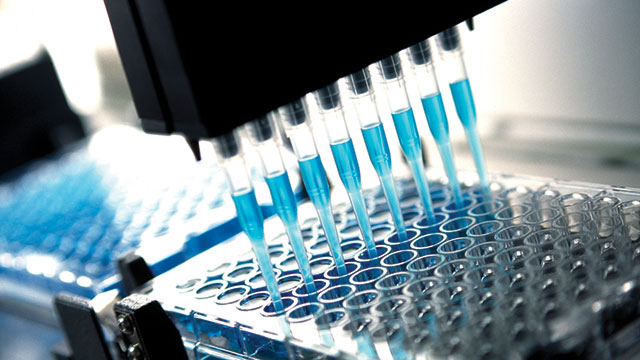 The identification of new drugs from among an infinite combination of atoms and linkages has, for most of its history, been restricted by the slow crawl of low throughput intrinsic to the technology available. A classic example of drug discovery that has evolved along with gains in throughput is the identification of microtubule targeting agents (MTAs). For several hundred years, botanicals derived from the autumn crocus have been used to relieve gout and other inflammatory immune disorders. The active ingredient, colchicine, was identified and characterized in the 1940s, but its actual activity was not defined until the 1960s. Because colchicine treatment accentuates mitotic figures in cell preparations, allowing easy visualization, its use in research led to definitive proof that human cells have 46, not 48, chromosomes. Forward chemical genetic investigations later linked a cellular function, mitosis, to discovery of a protein, tubulin, via binding of colchicine. Another MTA, Taxol, was identified shortly thereafter, and surprisingly displayed an opposing function to colchicine, promoting rather than inhibiting microtubule polymerization. Like colchicine, Taxol is botanical in origin, from the bark of the Pacific yew. Because of the strength of its microtubule binding activity, Taxol was used to biochemically pull down, purify, and characterize components of protein complexes that reside there along with tubulin. Throughout the next two decades, the anti-tumor activities of Taxol were investigated and defined, and since its initial FDA approval in 1992, it has been used widely in chemotherapeutic regimens, particularly for breast and ovarian cancers.

The existence of two perfectly opposing MTAs in the limitless chemical wilderness prompts the tantalizing idea that there are many more out there, and that perhaps problems like chemotherapeutic drug resistance can be overcome by using them in series or parallel, analogously to classes of antibiotics. Or that activities and specificities can be optimized, and toxicities minimized. The great contemporary leap in capability for chemical screening using extensive natural product and synthetic libraries unlocks the possibility that investigators may actually find them. Hence, modern MTA drug discovery has evolved to incorporate assays with ever-greater sensitivity and throughput. Initial improvements relied on detection of changes in refracted light sent through purified microtubule samples stained with nucleic acid-binding dyes. Recent improvements have increased sensitivity many-fold by using enzymatically applied fluorophore tags, and automating microscopic assays to detect slight changes in fluorescent emissions. As a result, there are many new candidate MTAs somewhere along the pipeline from the wilderness to the door step.

These developments have only been possible with the reduction of human error. To a certain extent, the more human hands manipulate things in the realm of the very small, the more they skew the results in ways that are, by contrast, very large. In chemical screening and many other high-throughput protocols, automated liquid handlers have stepped in where human hands would otherwise fail. Liquid handlers apply robotics and software to program and manipulate liquid distribution tasks into adaptable outputs. This can take a form procedurally indistinguishable from pipetting small volumes into microwell plates, but using movable arms and interchangeable stages by calibrating compressed air through plastic tips. It may also be something as divergent as automating the flow of bacterial colony picking, culturing, and genetic analysis, guiding robotics with sound waves. Consequently, outputs for liquid handlers cover a broad range of categories, including chemical library deposition, stepwise qPCR setup, and biochemical or cellular biology-based screening using techniques such as ELISA or flow cytometry. Because of the diversity of outputs, liquid handlers come in multipurpose formats that can be customized to different assays, or specialized formats adapted to specific repetitive tasks that can automate immunohistochemical staining, antibody purification, and more.

Hamilton Robotics offers the multipurpose Microlab series of liquid handlers. The Microlab Vantage model coordinates pipets and tips with compressed O-ring expansion (CORE), and comes in an array of modular, stacking cabinets that includes: 1) a pipettor with customizable arms, channels, and transport; 2) a logistics cabinet with storage, waste, device integration, and transport ports; 3) a track gripper with transportation between pipettor and logistics cabinets or third-party output instruments; and 4) a rear integration cabinet with storage and device integration space. The PerkinElmer JANUS and Beckman Coulter Biomek series offer analogous setups, although each differs in its ability to combine with other models, its available number of decks for microplates (and therefore its optimal throughput), and range of pipetting volume. For instance, the Janus MDT nanohead extension enables pipetting down to 50 nanoliters, making it competitive with specialized drug discovery-oriented liquid handlers such as Labcyte Echo.

In any high-throughput process, error and contamination can come from a wide variety of human sources: mis-pipetting into adjacent microwells; miscalculation of reagents in master mixes; or contaminants on gloves, tubes, or equipment that transfers into microwells. These errors can magnify discrepancies in final results; this is especially true with contaminating DNAs that can be mis-amplified in qPCR reactions. In a series of tests executed by the Eppendorf Corporation, manual reactions in three separate iterations using the same set of reagents obtained copy numbers diverging by two orders of magnitude. In equivalent automated setups using their EpMotion liquid handler, variability decreased to 1.5 percent, with single copy detection sensitivity.

Discrepancies in consistency between manual and automated protocols is not only a boon to research science and reproducibility—these differences can have real, life-or-death implications. Accurate and rapid identification of pathogens or emerging disease vectors have the potential to mitigate food-borne illness or tropical disease outbreaks. Projects to streamline DNA profiling workflows, for example with PerkinElmer working to apply their technology to discrete liquid handling steps from pre-processing, to DNA extraction, qPCR setup, DNA normalization, short tandem repeat reactions, and final reaction clean-up can minimize error in the identification of criminal suspects. Automated processing of DNA samples on FTA cards for upload to the FBI’s CODIS database can streamline and standardize national links between criminal acts and DNA profiles, with greater speed and accuracy. With the application of robotics to steps where it is becoming increasingly necessary to do so, researchers can devote themselves more fully to the tasks of data collection and analysis, where robots are not quite ready to tread.

For additional resources on automated liquid handlers, including useful articles and a list of manufacturers, visit www.labmanager.com/auto-liquid-handlers