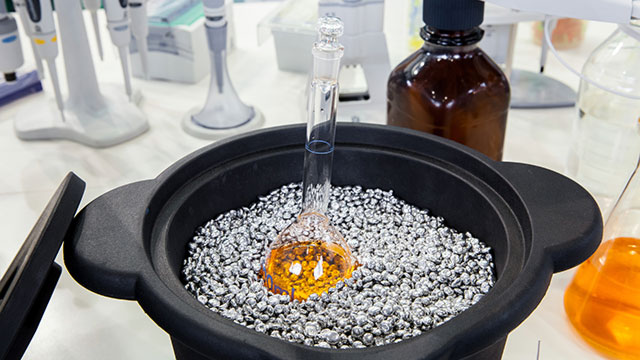 Anyone who has ever incubated anything has also fought contamination at some time—probably many times—and sometimes it starts in a bath. When asked about sample contamination in water baths, David Hayes, product manager for Cole-Parmer Laboratory Equipment & Supplies (Vernon Hills, IL), says, “The effect is as varied as the types of samples that get thawed or brought to a specific temperature for an experiment.”

Sometimes even being careful is not enough. “Contamination can beset any and all samples incubated in a water bath, even with proper bath maintenance,” says Alexander Cranson, technical sales support, North America, at Sheldon Manufacturing (Cornelius, OR). A bath kept at human body temperature, 37° Celsius, creates the biggest risk because it generates an ideal environment for microbial growth.

Although nothing is foolproof, scientists can reduce the odds of bath-related contamination of samples. As Cranson points out, “Proper bath-cleaning protocols are paramount.” For one thing, that means not cleaning with anything abrasive that creates fine scratches that enhance the possibility of algal or bacterial growth.

Related Video: What to Consider When Buying an Immersion Circulator

How scientists use a bath also matters. Some top tips include the following: use only distilled water, float the sample so the lids stay dry, and keep the bath covered as much as possible. Keeping the samples in place with racks also helps. Cranson adds, “Place your bath away from high-traffic doorways and out of direct sunlight.” Borderline-obsessive cleaning won’t hurt. “Sanitize and wipe down the vessels, benches, and anything that comes in contact with the water, and change gloves frequently,” Hayes encourages.

With water serving as the vehicle of contamination in so many cases, one option is this: get rid of it. Sakthikumar Ambady, a molecular biologist in the biomedical engineering department at Worcester Polytechnic Institute (Worcester, MA), says, “I can personally vouch for the success in eliminating contamination by avoiding the use of a water bath.” Instead, he uses a dry bath or keeps the reagents on the bench to bring the samples to the ambient temperature.

Ambady has trained more than 300 students over the past five years using this approach, and his students contaminated the cultures in only three instances. He points out: “These students are novices, and as you can imagine, they are not attuned to the realities of contamination.” Still, omitting the water baths eliminated most of the contamination.

The beads also make it easy to hold a container at almost any angle without damaging the sample. If scientists use beads that do not collect moisture, it’s easier to keep them clean. Still, beads need cleaning too. Nonetheless, Hayes says that the “use of metallic bath beads instead of water avoids splashing, dripping, and the majority of transfer contamination.”

Bead baths can also keep a lab greener. Some bead baths can heat samples while using less energy. In addition, the cleaners for beads can be less toxic than some things used in water baths.

Making changes in a lab might take some doing. “Cell culturists are generally compulsively obsessive when it comes to their routine procedures,” says Ambady. But if contamination keeps coming up in your samples, it might be time to rethink your sample-heating approach.

New Study Shows Scientists May Be Contaminating Their Own Samples

New Study Shows Scientists May Be Contaminating Their Own Samples

What You Need to Know about Cleanroom Fogging

What You Need to Know about Cleanroom Fogging

How Viruses and Bacteria Can Reach Drinking Water Wells

How Viruses and Bacteria Can Reach Drinking Water Wells