“With global food safety testing services projected to reach nearly $20 billion by 2022, the food industry is met with increasing demands from both the consumer and regulatory agencies to maintain a safe food product,” says Lynette Johnston, food safety extension associate at North Carolina State University in Raleigh. “At the same time, research has improved analytical methods, offering faster turnaround times for results with higher sensitivity for low-level contaminants and detection of contaminants in complex matrices.”

New government regulations also force vendors to be more careful than ever. “The current onset of the Food Safety Modernization Act, FSMA, for many FDA-regulated food facilities will continue to drive increased testing,” Johnston explains. “For example, FSMA’s Preventive Controls for Human Food rule requires that a facility verify that hazards are being controlled and corrective actions are taken to prevent contamination.” She adds, “Product testing and environmental monitoring are examples of steps a firm may include for verification.”

With increasing demands to test foods for more potential safety hazards, many companies look to automation. According to Sandra Luley, global marketing manager for applied sciences at QIAGEN (Hilden, Germany), “Big food producers and global food companies are trying to centralize their testing for cost savings, and this means that technology has to be set for high throughput.” As an example, she says that some labs process 1,000 samples for salmonella every day. “In order to cope with those requirements,” Luley says, “you need automation— very capable automated solutions that guarantee the safety of the products and are not prone to error.”

To identify the source of a contamination when it does arise, says Luley, official institutions and some companies use next-generation sequencing. “It’s a fast way to sequence the DNA of bacteria, identify the particular strain, and see where it came from,” she explains. 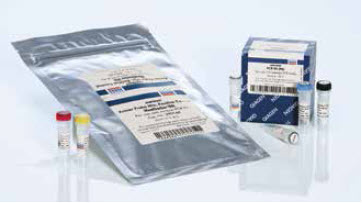 What’s not in foods can matter as much as what is, so QIAGEN will soon offer an assay that identifies meat in foods that are supposed to be meat-free.Image courtesy of QIAGENTo make this easier, QIAGEN develops and automates food-testing workflows. “We put complete testing workflows from sample to insight into validation studies,” Luley says. “We make sure that the whole process—from extraction of DNA to results—is fully validated.”

QIAGEN keeps expanding its food safety kits. Soon it will release an assay that can identify meat in foods that are supposed to be vegetarian or vegan.

Increasing concerns over allergens also fuel the creation of new tests. “If something is supposed to be free from nuts, for example, you need to be able to prove that,” says Phil Taylor, global marketing manager for food, environmental, and forensics at SCIEX (Framingham, MA), and mass spectrometry (MS) can do that. “You can identify a peptide that is unique to an allergen, and then track its presence through the entire food manufacturing process,” Taylor explains.

MS can also analyze foods for gluten. “There are different forms of gluten from barley, rye, wheat, and oats,” says Taylor, “and a food product containing gluten when it’s not supposed to can be very debilitating for some people.” 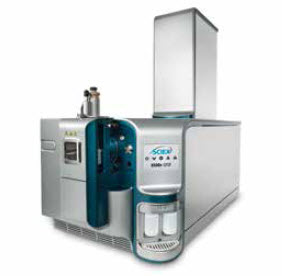 The SCIEX X500R QTOF system analyzes known and unknown contaminants in foods.Image courtesy of SCIEXWith SCIEX’s X500R QTOF system, says Taylor, “You get the true spectra, like a fingerprint of the compound you’re detecting.” So in one scan the data provide information on potential hazards and even unknowns.

Specific hazards in foods, such as Shiga toxin–producing E. coli, can also be analyzed with droplet digital polymerase chain reaction (ddPCR), from Bio-Rad (Hercules, CA). This company is working on ddPCR assays that, says Mike Clark, Bio-Rad’s international group product manager, “can identify if a bacterium includes both target virulence genes, eae and stx, in the same genome.” He adds, “With conventional PCR, you can get positive results for both genes, but only ddPCR shows if they are in the same cell,” which qualifies the bacterium as a pathogen.

With ddPCR, food scientists can quickly know that a bacterium contains both virulence genes, instead of waiting on the seven- to ten-day culturing step that would be needed after conventional PCR.

In Dublin, Ohio, Nestlé—headquartered in Vevey, Switzerland— invested $31 million in the Nestlé Quality Assurance Center (NQAC) to verify the safety of its products.

When asked about some of the most advanced technologies used at NQAC, facility director Aaron Ayres says, “On the chemistry side, the use of mass spectrometry— especially LC-MS-MS and GC-MS-MS—allows the detection and quantification of contaminants at very low levels, parts-per-billion levels.” He adds, “It is used for large screens of more than 300 molecules per run.” 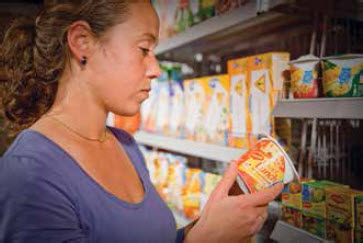 Customers expect safe foods, and the Nestlé Quality Assurance Center (NQAC) verifies product safetyImage courtesy of NestléIn addition to chemical approaches, scientists at NQAC use other methods. “On the microbiology side, and more specifically pathogen analyses, real-time PCR methods were chosen to improve specificity, time to result, and cost,” Ayres explains. “Overall, molecular methods are the larger part of our portfolio in applications at NQAC/ Dublin for food safety, authenticity, identification for factory investigations, and assistance with label claims.”

As this field evolves, some of a scientist’s needs will stay the same. As Johnston explains, “Regardless of the method, the food industry seeks testing methods that offer key benefits such as increased sensitivity, improved accuracy, decreased time, and reduced cost.”