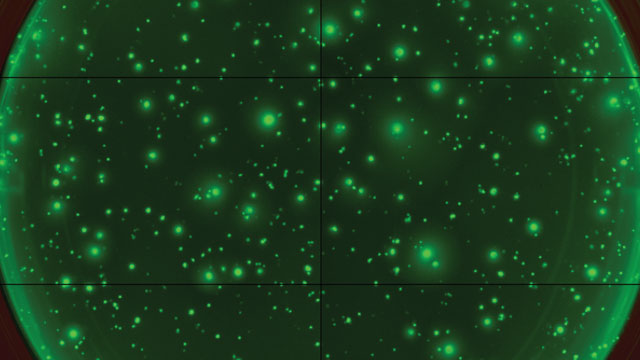 It All Comes Down to Volumetric Productivity

Transfection is not completely predictable. Copies of genes may insert randomly into the host cell’s genome, often at nonproductive genomic loci. Multiple inserted copies may enhance desirable properties or may cripple a cell’s ability to divide or thrive. Expressed foreign proteins themselves, or undesirable genetic insertions, may be toxic.

Clone selection or clone picking is the process by which individual cells are separated post-transfection, allowed to grow into colonies of genetically identical cells, and selected on the basis of one or more characteristics. Traditionally, selection begins with limiting dilution, a process by which a polyclonal suspension of cells is diluted to very low cell concentration. Small aliquots are then transferred to wells of a microplate in the expectation that one and only one transfected cell inhabits each well. As this cell divides, and the daughter cells divide, and so forth, a colony of identical cells forms.

Many things can go wrong during cell line development. According to Vitaliy Gavrilyuk, PhD, MD, CEO of cell line and bioprocess development firm CDI Bioscience (Madison, WI), issues arise from cells themselves (e.g., viability, protein-generating productivity, growth/expansion, ability to thrive in suspension versus as attached colonies) or from low plating yields and cell numbers, suitability of the culture medium, the need for and availability of automation, human resources devoted to assays and plate handling, or the ability to scale culture conditions to sufficient quantities of product.

“Single cells don’t grow very well,” Gavrilyuk explains. “Remember, they originated from organs.” Most biomanufacturing- worthy expression systems, such as Chinese hamster ovary (CHO) cells, are naturally attachment-dependent and must be weaned away from their preferred anchored state before they will thrive under suspension conditions. Nor is limiting dilution terribly efficient. Only about 30 percent of wells contain a single, viable cell, a requirement for the technique to succeed.

Conventional microplate- based methods require both a means of estimating cell number or colony size and a separate assay to determine suitability (for example, production of recombinant protein). “These operations require two or three extra devices, several manipulations, and at least one extra technician,” Gavrilyuk explains. “Moreover, the expansion time frame itself, 10 to 12 days, may be limiting.” Cells may require additional expansion before sufficient sample becomes available for testing. The combination of expansion duration, growth conditions, transfection, and the presence of foreign recombinant proteins overwhelms many cell lines.

“Viability can be a huge roadblock,” says Gavrilyuk. “You’re putting a lot of pressure on these cells just by putting them into microwells. It’s like dropping someone off on a desert island.”

With clone selection a significant part of its business, CDI Biosciences employs a culturing and cloning technique based on semi-solid growth media—for example, agar or enhanced cellulose, which are supplied by numerous vendors. These media support individual cells within a semi-solid matrix instead of in suspension. The semi-solid matrix resembles attachment growth conditions and, says Gavrilyuk, provides higher plating yields and viability. “It’s not real attachment, but it’s enough of an improvement for robust cellular growth, and the medium gives us a greater chance to expand and find optimal clones.”

Within the semi-solid matrix, cells are detected by imaging colony size with white light and calculating production through fluorescence. When clone-picking time arrives, CDI uses an algorithm based on the ratio of productivity and colony size to determine which colonies are the most likely to perform best.

Natalia Lysaya, global product manager for biotherapeutics at Molecular Devices (Sunnyvale, CA), notes that clone-picking from semi-solid media still entails a degree of uncertainty. “The major challenge is correlating the degree of fluorescence intensity related to protein secretion during clone selection to protein-producing productivity upon expansion,” says Lysaya. In other words, clones designated as high producers during selection may not fulfill their promise at higher cell density. The same disconnect exists for other desirable characteristics such as viability or the ability to achieve workable cell densities.

Root causes abound for this phenomenon, from conditions of initial culture and expansion to medium and nutrient composition to transfection technique. Some cells may be transiently transfected and thereby lose their capacity for producing protein as their population expands.

Conventional dilution techniques in suspension cultures have this problem as well. However, selecting colonies from semi-solid media makes the selection of colonies that are totally nonproductive from the start less likely.

To reduce the risk of productivity disconnection, Lysaya advises users to verify monoclonality and, to overcome the correlation problem, to perform two rounds of cloning. Regardless of the cloning and selection method, multiple cloning rounds are common with both production cells and hybridomas.

Where Automation Fits In

Cell culture automation typically consists of a liquid handler, an incubator, and a monitoring system to assure maintenance of culture conditions. Kristina Klette, PhD, scientific leader for cellular and protein sciences at Hamilton (Reno, NV), considers the liquid handler as the core component. She advises purchasers to consider biosafety, manipulating adherent versus suspension cells, integration with incubators and imagers, software handling of parallel processes, and how pipettes manipulate liquids to reduce contamination risk.

Automation and computerization have boosted the efficiency and throughput of most life science workflows, and clone selection is no exception. “People are interested in automation to eliminate tedious manual processes,” says Susanne Braum, PhD, senior product manager, liquid handling and cell biology, at Tecan (Männedorf, Switzerland). “Lab workers no longer need to come in over the weekend or in the middle of the night because cells require feeding or media exchange.”

Automated liquid handlers are said to dispense and aspirate about as well as a very skilled technician on a very good day. But unlike humans, the robotic pipettor never gets tired, bored, or distracted—and calibration disasters aside, robots never have an off day. Media changes and periodic feeds occur precisely when they need to, not simply when they’re convenient. This ensures that in a multi-plate experiment, each well experiences the same conditions at precisely the same time intervals—which leads to arguably the most significant benefit of all: consistency.

During biopharmaceutical development many usable and even outstanding clones are rejected not because of poor performance, but because manual liquid handling steps were non-uniform across microplates.

“In the long run, selecting the best clone in the shortest time frame means shorter development times,” Braum notes. “You’re able to check the efficiency of transfection and expression very quickly, and keep track of samples through the entire workflow. Automated workflows are reliable, robust, and reproducible.”

Imaging colonies to estimate cell populations is somewhat more difficult with semi-solid media compared with suspension-cultured cells, particularly using conventional plate reading and imaging equipment. Suspended cells fall to the bottom of the well when agitation stops, creating a sharp focal point, whereas colonies can form at any point in three dimensions in semi-solid media.

Automation compensates for a great deal of human variability, but automated workflows are approximately as inexact as manual operations with regard to plating efficiency. “Cloning is inherently a trial-and-error process,” Braum concedes. In other words, scientists don’t know if they got it right until rather late in the game. “But automation allows you to do way more in less time, and with greater reproducibility.”

Biopharmaceutical antibody development projects usually begin with mouse hybridomas—immortalized, antibody-producing B (immune) cells from mice that have been challenged by an appropriate antigen. Investigators isolate, sequence, and reverse-engineer these antibodies into genes that are inserted into production cells.

The decision to go monoclonal or to settle with polyclonality is governed by the end use. Polyclonals (little or no clone selection required) suffice for research-grade antibodies, while human therapeutics are always monoclonals that require picking the most productive clones. The US Food and Drug Administration has been pushing for the use of monoclonal antibodies for human diagnostics as well.

Regardless of the ultimate production platform, hybridomas require selection as well. “The big challenge is isolating the rare or unique hybridoma populations early, and separating them from much faster-growing B-cell populations,” says Jason Goldstein, PhD, founder of contract research firm Annular Biotechnology (Atlanta, GA). “Once you immortalize B cells, you have a very narrow time frame in which to do this.”

When B cells are extracted from a mouse, they incorporate the entire repertoire of the animal’s immune systems—responses to every antigen it has experienced. Although the B cells of interest are likely amplified due to the recent antigen challenge, they may not be the fastest-growing. Rapidly reproducing cells can overwhelm a culture within a few generations.

According to Goldstein, this phenomenon illustrates another weakness of limiting dilution, which requires significant time to achieve monoclonality. “You’re at the mercy of growth rates of those hybridomas,” he says. “Once your target cells are overgrown, they’re gone.”

Overgrowth also arises from cultures contaminated by cells from species other than the desired line, or by cells that have undergone substantial genetic drift—hence why all serious cell-based work begins with authenticated cell lines. Authentication ensures that cells are genetically identical to reference strains maintained by nonprofit cell repository ATCC (Manassas, VA) and other organizations.

“The line would then need to be re-authenticated and characterized prior to making master and working cell banks, to ensure no cell line or other contamination occurred during the process,” explains Mindy Goldsborough, PhD, VP for ATCC Cell Systems.

Investigators should be aware, however, of the potential for changes in a cell line’s metabolism or growth as a consequence of inserting foreign genes. Before undertaking costly clone selection, companies should conduct long-term studies to validate that the transformed cells behave consistently and predictably over time. “They should first be concerned about that. I know that these companies care very much about the stability of their clones over time, and want to ensure that the cell line characteristics—whatever they are now, once the drug gene is in them—remain the same over time,” Goldsborough says. “They should be more concerned about that than about changes from the parental line.”