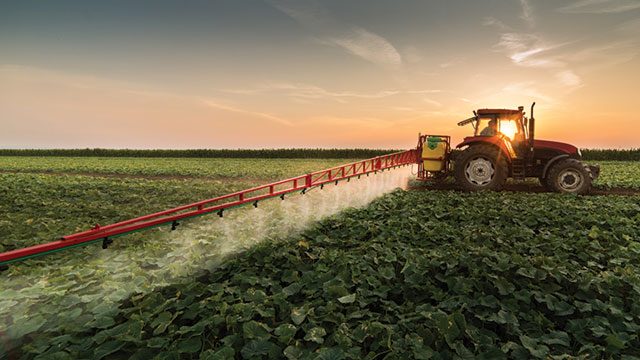 Whether considered a necessity, an indulgence, part of a culture, or even a life’s work, the subject of food is always up for discussion. Within the sphere of health and wellness, the topic can become quite polarizing. The conversation surrounding organic versus conventionally farmed foods is one such example, with dozens of articles extolling the virtues of organic foods, and an equal number that take an opposing view. It is undoubtedly a complex issue, and each perspective has its merits.

There is a long history of pesticide discovery, development, and use in the United States. Despite increasing consumer demand for organically farmed foods, pesticides are still widely used on crops grown for animal feed or human consumption. Numerous regulations, monitoring programs, and residue testing methods are employed to ensure safe pesticide application. Advances in analytical techniques including gas and liquid chromatography coupled to mass spectrometry continue to improve the sensitivity of pesticide residue detection.

THE EVOLUTION OF PESTICIDE USE

Pesticide use dates back to some of the earliest farming, as Ancient Sumerians and Romans used sulfur and salt to control pests. Later, soap, tobacco infusions, and arsenic were implemented as pesticides. Following World War II, a boom in pesticide development led to the creation of compounds such as DDT (dichlorodiphenyltrichloroethane), aldrin, dieldrin, endrin, and 2,4-D (2,4-Dichlorophenoxyacetic acid). These pesticides were initially effective, however their potent, sterilizing nature eventually led certain pests to develop resistance, and dangerous residues accumulated in food, water, and soil. The publication of Rachel Carson’s Silent Spring in 1962 shed a harsh light on the impact of indiscriminate pesticide use, and despite criticism, sparked an environmental movement.

The next generation of pesticides were designed with higher specificity. Insecticides (such as organophosphorus and carbamates) targeted insects, herbicides (including glyphosate) targeted plants, and fungicides and rodenticides targeted fungi and rodents, respectively. Along with a shift toward greater specificity, there was also a focus on integrated pest management (IPM). IPM is considered a more holistic approach that minimizes pesticide use and aims to manage, but not eradicate, pests. Since then, neonicotinoids and genetically modified organisms have been developed as defenses against pests.

Pesticide use has been instrumental for improving crop yields, thus supporting food production for humans and livestock. The desire for high yields coupled to consumer demand for visually appealing, unblemished produce has driven their continued use. As such, regulation and testing methods must be in place to limit exposure and ensure safety.

The United States Environmental Protection Agency (EPA), under the Food Quality Protection Act (FQPA), ensures that pesticides adhere to specific safety standards, and re-evaluates pesticides every 15 years. As part of its regulatory activity, the EPA develops a maximum legal residue limit (tolerance) for each treated food using data obtained from the United States Department of Agriculture (USDA) Pesticide Data Program. The EPA determines a tolerance that ensures use of a specific pesticide is associated with “reasonable certainty of no harm,” factoring in toxicity, concentration, and residue. Since many food products are imported to the United States, the EPA tolerances are applied to both domestic and imported foods.

Gas and liquid chromatography (GC and LC) coupled to mass spectrometry (MS) are ideal for the identification and quantification of known and unknown compounds within a sample. As such, these techniques are widely used for pesticide residue analysis.

Sample preparation for pesticide analysis often necessitates extraction steps to isolate the pesticides from the sample matrix and cleanup steps to isolate the compound of interest from co-extracts. The QuEChERS (Quick, Easy, Cheap, Effective, Rugged, and Safe) method was first published in 2003 by USDA scientists for the analysis of fruits and vegetables, and has been expanded for use with animal products, grains, and other foods. Briefly, the original method involves the combination of sample with acetonitrile, magnesium sulfate, and sodium chloride. Cleanup is achieved with dispersive solid phase extraction (dSPE) using anhydrous magnesium sulfate and a primary secondary amine sorbent combined with the acetonitrile extract to remove polar matrix components such as sugars and organic acids. The protocol has since been modified to include two additional versions, the AOAC 2007.01 and EN 15662.

Jack Troester is the chemistry supervisor of the Wyoming Department of Agriculture Analytical Services Laboratory, where they screen for pesticides in food commodities, plant material, soil, water, and bees. “Generally, we use a modified QuEChERS extraction with dSPE cleanup for the majority of our samples. The type of QuEChERS and dSPE is matrix and compound dependent,” says Troester. Different matrices and compounds of interest pose some challenges during sample preparation. “Complex matrices can cause reduced or amplified recovery. While cleanup processes are used, finding a balance of maintaining low detection limits and dealing with complex matrices is always a challenge,” explains Troester.

GC and LC are the most common techniques used for multiresidue pesticide analysis. Each technique has unique advantages and disadvantages, depending on the sample matrix and pesticides of interest. Pesticide polarity is an important consideration, as GC-MS is best suited to less polar compounds while LC-MS is best for highly polar compounds. For GC analysis, a pesticide must be volatile or undergo derivatization while LC enables detection of a much wider range of pesticides. “We use either or both GC or LC for all of our pesticide methods,” says Troester. “Liquid chromatography extraction methods are typically easier and achieve lower detection limits, partially due to larger injection volumes. GC methods are rugged, reliable, and offer a different detection approach than LC. This can lead to identification of compounds LC may miss.”

Detection methods are also an important consideration. MS quantifies the mass-to-charge ratio of ions, while MS-MS (tandem MS) breaks precursor ions into fragments, which are then separated and detected in a second stage. MS-MS offers greater selectivity, which is beneficial for the detection of known compounds. According to Troester, “The obvious advantage of MS-MS is the high level of selectivity leading to lower method detection limits. The advantage of MS is the lack of selectivity, which can be useful in identifying compounds that we were not necessarily even looking for and is helpful in identifying ‘unknown’ compounds.”

McCall describes a trend toward field instrumentation for pesticide analysis, “Laboratory-based LC-MS technologies have been employed for screening pesticides for years. However, interest is growing for more rapid screening techniques for deployment outside the lab. Such field-deployable technologies may mitigate risk at earlier points in the supply chain by allowing growers to screen crops pre-harvest to determine the best time to harvest them, thereby reducing the risk to consumers. And so, laboratories are challenging vendors to deliver rapid, field-deployable, portable technologies such as direct MS whereby samples are introduced into the mass spectrometer under atmospheric pressure without prior chromatographic separation, with automated chemometric statistics for obtaining results in real time.”

The impact of pesticides used in conventional farming on human health remains unclear, and at this time, pesticides are still widely used to improve crop yields. Adherence to maximum residue limits, ongoing efforts to reduce the amount of pesticides applied, and sensitive testing techniques all serve to ensure consumer health and safety. As technology improves, we may further reduce our reliance on pesticides. In the meantime, vigilance is required to ensure environmental and human health.