The University of Rochester Medical Center found itself outgrowing its space at Strong Memorial Hospital, where its various specialized lab services were sprinkled throughout the facility and rarely had cause to interact.

Hence, a major relocation and consolidation effort moved all outpatient testing to a newly renovated and expanded space at 211 Bailey Road in West Henrietta, NY. About 400 staff and 700 pieces of equipment were moved in Phase I (a 130,000 sq. ft. project), with more areas planned to move in Phase II. The ribbon cutting for the completion of the Phase I project took place in June 2019. 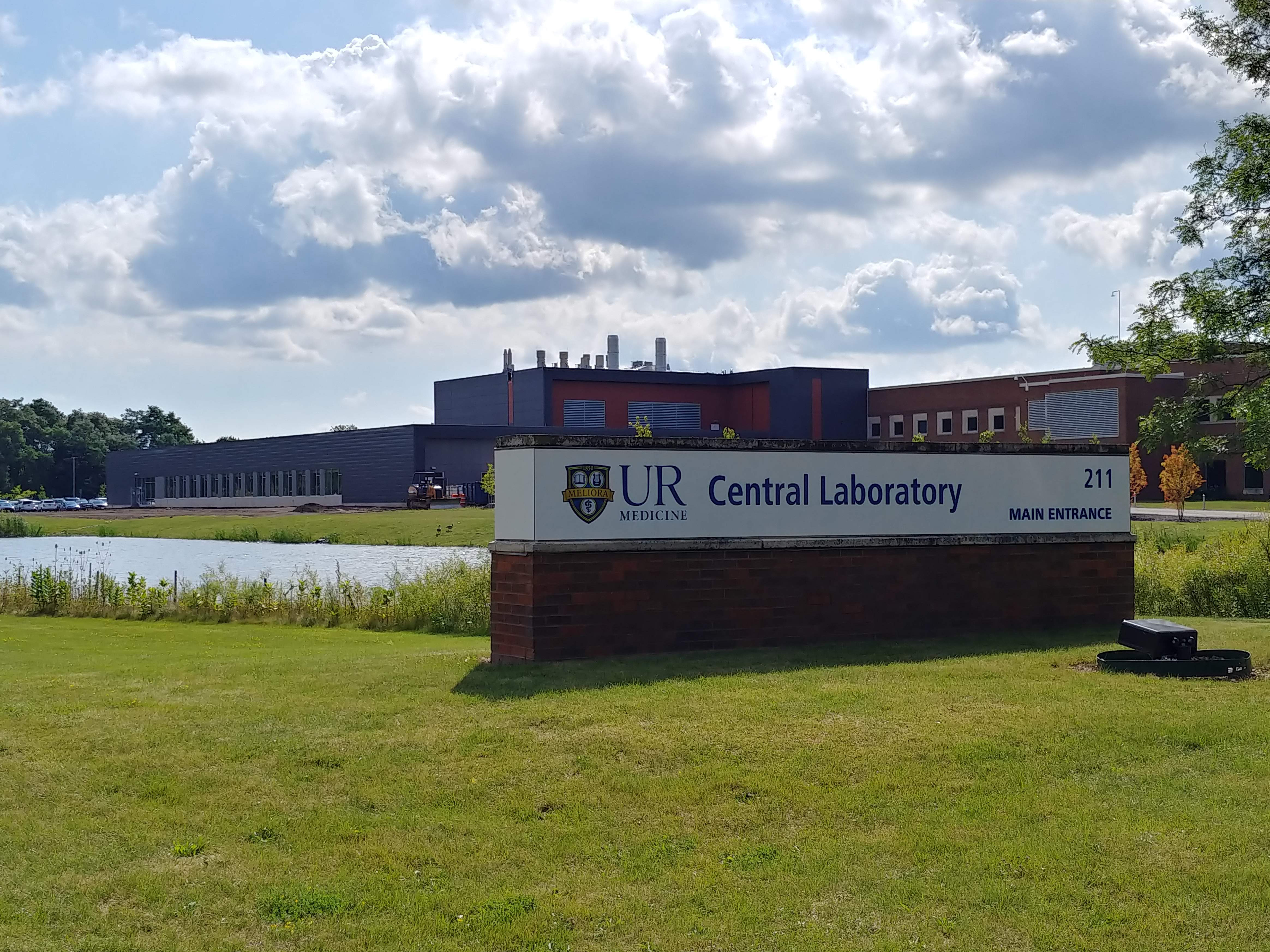 An exterior view of the main entrance, with the core lab in the distance.CREDIT: BETHANY BUSHEN, URMC

The design team was a collaboration between HDR, Holt Architects, and the University of Rochester’s Planning and Project Management Department, all of whom worked closely with leaders from the Department of Pathology & Laboratory Medicine to ensure all space needs were met.

A new home for healthcare

URMC's specimen receiving and courier service lines are all based at this central lab. The institution stills run all critical, inpatient testing at Strong Memorial Hospital, but has moved the majority of its administration, support staff, and operations to Bailey Road.

"The administration had two goals," said Dr. Bruce Smoller, Chair of Pathology & Laboratory Medicine at the University of Rochester Medical Center. "One was that they needed [us] to figure out a way to move as much of our laboratory operations off-site as was possible without in any way hindering patient care. For example, we couldn’t move the blood bank because you can’t have an emergency room and a blood bank that’s 15 minutes away.

"The second goal was this," he said. "The University of Rochester has been in the process of developing relationships from all-out buying to working relationships with hospital within a 150 mile radius around New York State. What they asked [us] to do was build a laboratory that could do the same thing for all these small hospitals - that is, consolidate all their laboratories on-site to the smallest necessary state." 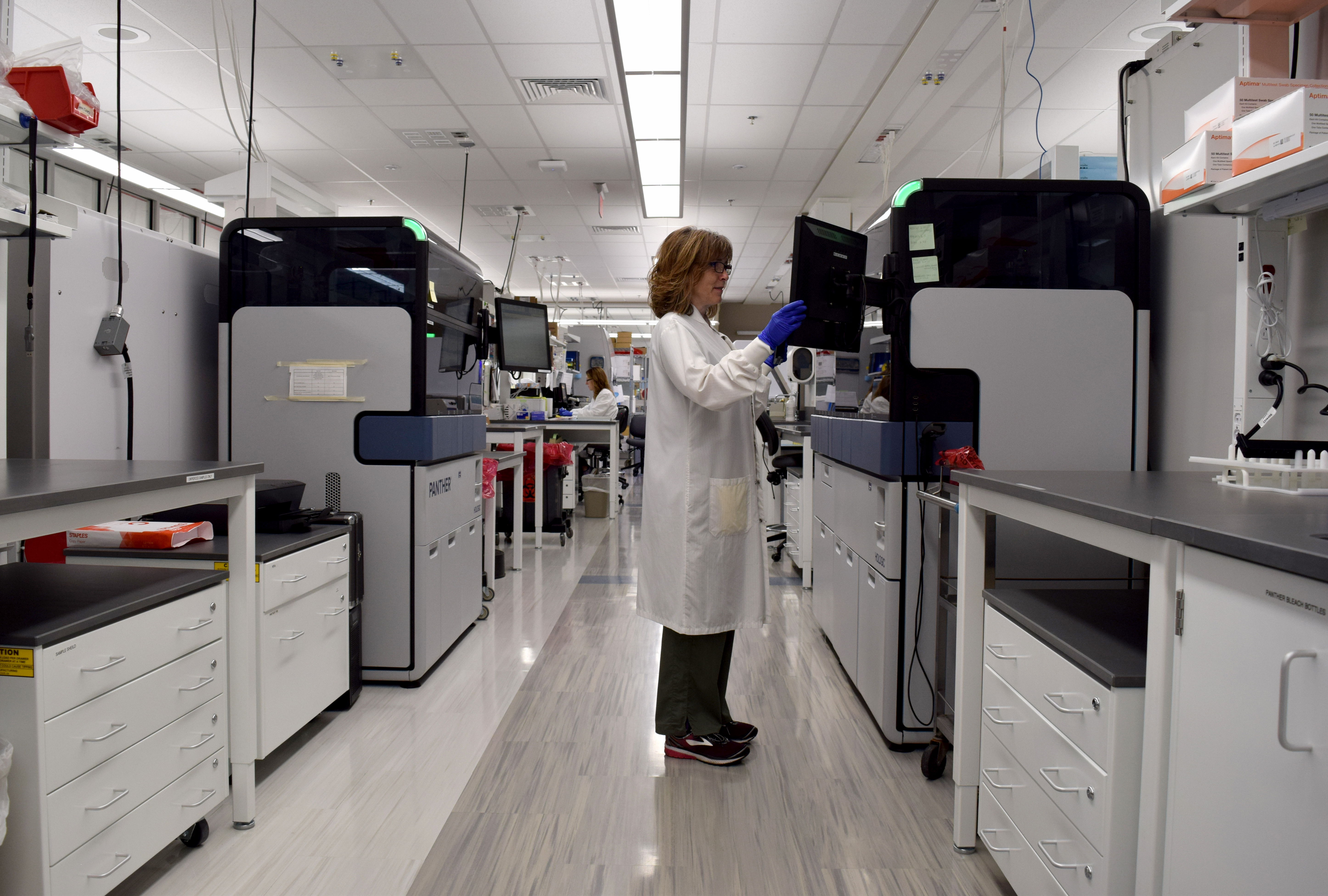 The URMC facility consists of about 20 different, specialized lab sections, ranging from hematology to toxicology to microbiology. Each section and its staff had its own unique concerns, needs, and desires for their new home on Bailey Road.

Vicki VanDeWalle, Director of Performance Improvement and Projects for Pathology & Laboratory Medicine, said, "We had all the groundwork of space, amenities, people, equipment, power needs, water—all those types of things we did first. And then we worked very closely with each area and the architects to walk through their space—how did they function, what is their workflow, what adjacencies make sense—so we could start building a bigger scope of 'How do we put these pieces together?' Each area had a say in their operation.”

The 211 Bailey Road facility is situated in an area without much around it—which, as both Smoller and VanDeWalle pointed out, is a challenge for staff members who only have a 30-minute lunch break. Therefore, amenities were a priority in the design process.

"The building is not immediately adjacent to anywhere to eat," said Smoller. "I had to advocate for dining facilities, places to just hang out like lounges, locker rooms, a gym, a lactation room … just the little things that are not unreasonable requests that sort of fall through the cracks if you're not diligent about them."

“Moving out here one of the things we really tried to accommodate was having people not feel that they were losing something," said VanDeWalle. "This was important to people, not to be minimized at all.”

Melissa Allen, Director of Operations for Pathology & Laboratory Medicine, agreed: "If you have folks that only have half an hour, [you need] to really understand what is valued by the staff." 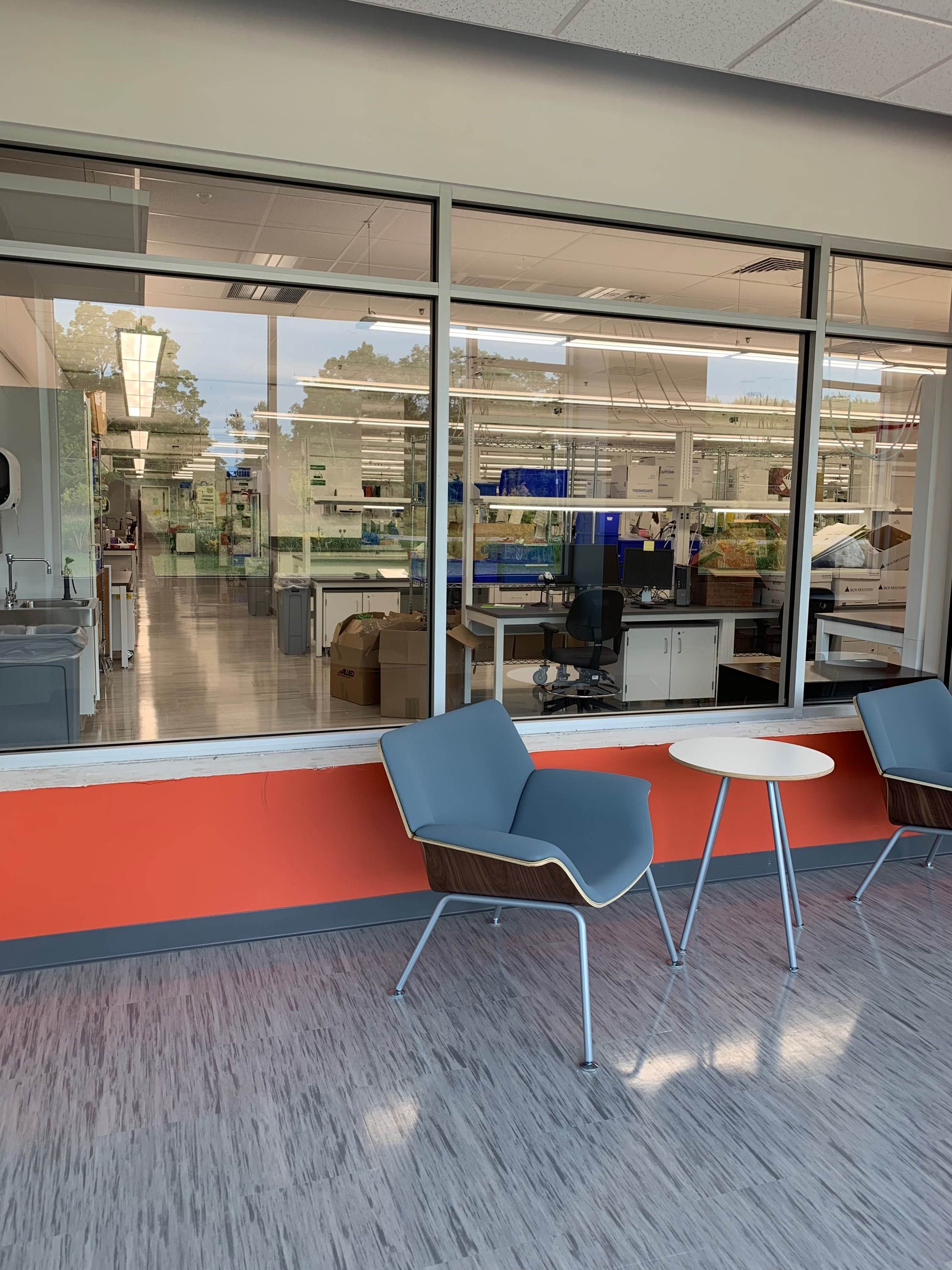 Shell A lab break area, with a view into the core lab.CREDIT: VICKI VANDEWALLE

The future of medicine

Flexibility was a key concern for the design team. Technology and research moves fast in the medical field, and major renovations just cannot be done every few years.

"We had to go back and redesign because our volume projections changed, the scope of the laboratories changed," said Allen.

She added, "It was definitely a balance between trying to complete something more architecturally advanced versus wide flexibility, and [something that] would stand the test of time over many many years."

For example, to accommodate possible future needs, the team purchased casework for lab testing and benches that can easily be raised or lowered or taken down.

"The open floor plan gives the advantage of lending itself to flexibility as things contract or expand, as testing patterns should change you need more of this and less of this," said Smoller. "If you’re not locked in by walls, it’s easier to move things around."

Budget issues eventually forced the planning team to take a second look at their list of priorities. Things like custom wall colors and flooring were swapped out for standard, more cost-efficient options. New furniture was scrapped in favor of the furniture that was already in the facility.

“That would be one thing I would recommend—go through the design phase before you test the budget,” said VanDeWalle, adding that the "bells and whistles" eventually didn't matter so long as the facility had the necessary equipment as well as some nice-looking architectural features.

Smoller added that user input is something a design team must absolutely take into consideration when planning new or renovated lab spaces.

The open concept layout has allowed for collaboration among labs that were previously separate, either within the same building, or at different sites altogether. This project offered the opportunity to upgrade some of the automation (i.e. Kiestra for Microbiology and Roche Pre-Analytical and Automated Chemistry).

While it is too soon to tell if the more open physical atmosphere will be a guarantee of enhanced collaboration between departments, Smoller is optimistic. He commented that, while increased collaboration was not a direct goal of the design team per se, “we did think that taking down walls would take down walls metaphorically.”

"All of these divisions that I mentioned were widely disparate over Strong while they were there," he added. "Now they’re in direct proximity with essentially no walls to divide them all. There’s got to be more interaction—they see each other. They never saw each other at Strong."

Allen believes that the overall morale has improved with the staff that was part of the Phase I move into 211 Bailey Road, with its large windows that let in sunlight and look out onto green spaces outdoors. She added that, while many staff were resistant to the change at first, they seem to feel differently now that they are working there.

Do you Value Consistency and Standardization in Your Lab Accreditation?

Do you Value Consistency and Standardization in Your Lab Accreditation?