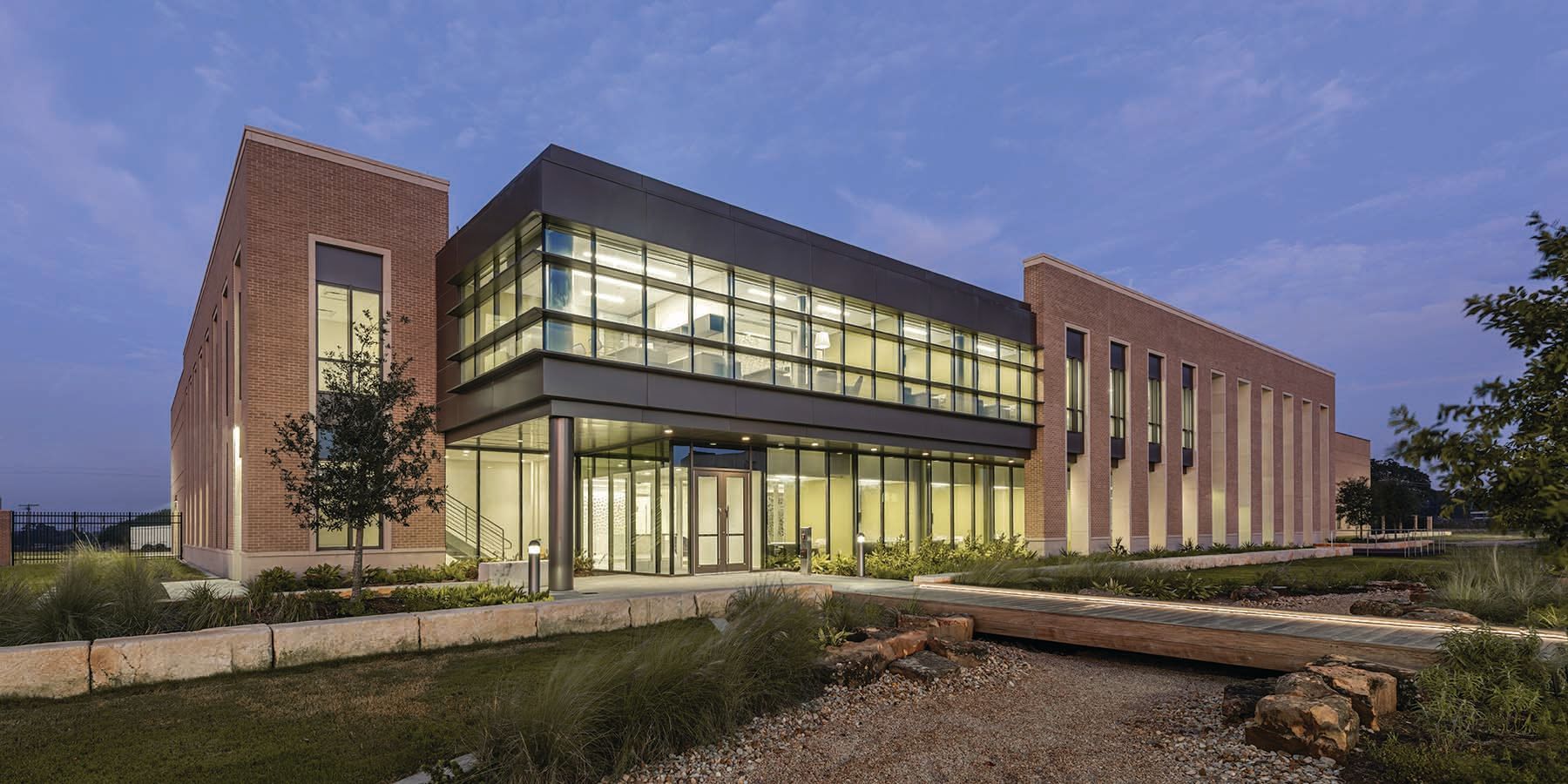 A view into the office suites and visitor zone at the front of the GHRC building.
Steinkamp Photography

Texas A&M University is home to some of the nation’s most prominent research programs focused on agriculture, natural resources, and life sciences. The school partnered with architecture and design firm Perkins&Will in 2010 to conduct a feasibility study that would allow them to build a state-of-the-art biocontainment laboratory facility on the main campus in College Station, Texas. The project team worked closely with influential members of Texas A&M’s College of Veterinary Medicine, Veterinary Diagnostic Laboratory, Health Science Center, and the Division of Research to develop a new research facility—the Global Health Research Complex (GHRC).

"The GHRC is one of only two animal facilities in the US that is able to safely handle bison at maximum containment."

This $74 million facility, measuring 102,000 sq. ft., houses laboratory spaces in a range of biological safety levels, and is capable of accommodating various types of livestock including horses, camels, sheep, goats, pigs, deer, avian species, and more. The GHRC includes BSL-3Ag spaces, which provide maximum containment for agricultural pathogens. A unique feature of the GHRC is that it is one of only two animal facilities in the US (along with the USDA’s National Animal Disease Center in Ames, Iowa) that is able to safely handle bison at maximum containment; it also accommodates other large species such as deer and elk. 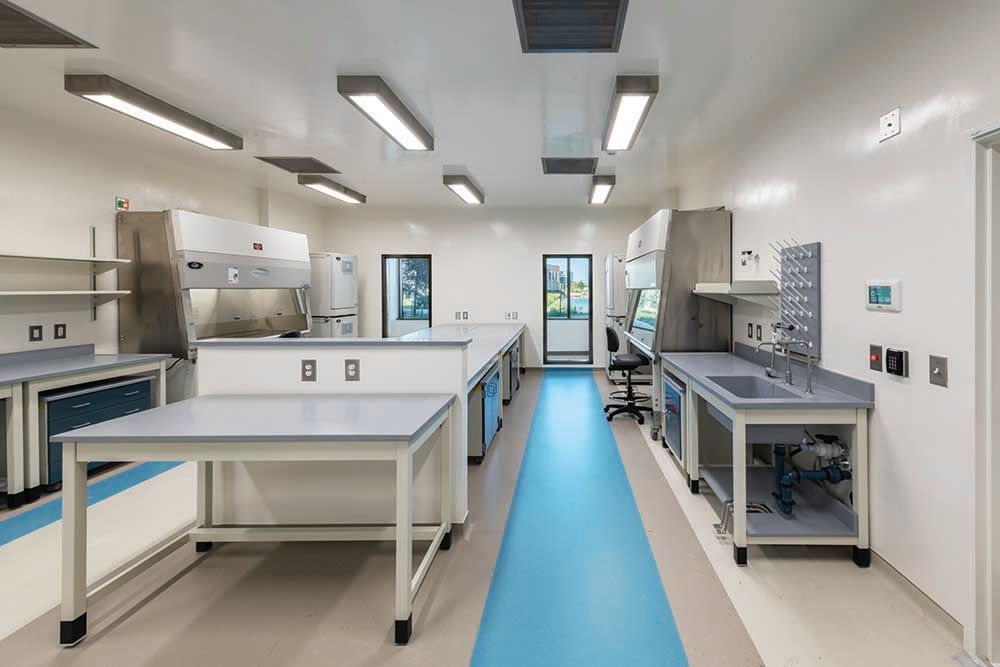 A Biosafety Level 3 laboratory with rare access to natural daylight and views of the site’s water feature. The utilities and casework are adaptable to a multitude of research configurations and equipment needs.
Steinkamp Photography

Alex Clinton, associate principal with Perkins&Will in Houston, Texas, notes that a flexible design for the handling areas was crucial when creating a space that would be safe and secure for these large animals, as well as the human researchers. “The elk and deer were obviously a challenge, as well as the bison—the bison was a big one,” Clinton says. Pens were designed to be flexible enough to contain different species, as well as removable so the staff could move in crates or set up different kinds of chutes as needed. “And then when it came to the bison—just because of the hazards surrounding working with the bison—the two large rooms at the south house nine pens that can be operated entirely remotely, so the caretakers and researchers can stay away from the bison but still manipulate them and move them through the pens into the squeeze chutes,” Clinton says.

A big concern regarding the design of the GHRC was how to safely move animals of various species and sizes through the building and within the holding rooms, says Lea Anne Leatherwood, project architect and associate with Perkins&Will in Houston. “We started off with touring other large animal facilities as a benchmark to see examples of penning configurations, what type of materials they use for penning, what was robust and what lasted, and how they facilitated moving the animals through the animal corridors and holding spaces,” she says. “We made three-dimensional physical models with moveable gates and toy animals to determine the sequences of opening a gate, shifting the animal to the next pen, and then closing the gate to allow staging for the next animal in the space.”

“This also gave the users an opportunity to physically work the penning and provide their feedback as well, so they could look at the feed bins, the water bowls, how the gates swung,” says Leatherwood. The mockup, she notes, led to an “on-the-fly design” to correct a safety panel gap issue before the final design was installed in the GHRC.

The ABSL-3Ag spaces are designed to stop the spread of aerosolized pathogens, and to act as a sort of sealed cage for the large animals within. The room includes airtight doors with automatic pneumatic gaskets, and airtight windows that allow the staff to observe the animal rooms from the outside. The rooms are required to pass a pressure test to confirm the airtight performance of the room envelope, and are operated at a negative pressure to adjacent spaces with a state-of-the-art laboratory control system to make sure the pressurization remains negative under any normal or failure circumstances. The high-security spaces are separated from public areas of the building through numerous levels of access control. Those who work in the ABSL-3Ag and BSL-3 spaces must don special protective gear, and must shower out of each individual animal holding room—they must also shower again before leaving the overall facility.

The liquid waste from the rooms is heat-treated in large tanks located below the space, and validation occurs before the liquid is released from the building. Solid wastes are sterilized via pass-through laboratory and tissue autoclave systems. Redundancy is used for all critical systems to provide continuous operation, and also to guard against single points of failure, which could mean a breach of containment.

From the beginning of the construction phase of the project, a team of safety personnel from various fields held daily safety meetings to review upcoming work on the GHRC and discuss potential risks. Local first responders were invited to the site to familiarize themselves with the layout and security features, in case they would one day need to access the building in an emergency.

Cameras are located throughout the facility for staff safety and operational monitoring, as well as for remote animal monitoring and security. All cameras can be accessed remotely on laptops or desktop computers, and can be leveraged for remote learning or instruction. The camera feeds from the holding rooms or above the necropsy tables are able to be shared and streamed if required. The building automation system controls strobe panels in each room, which can notify staff if there is an HVAC failure or another biosafety/biocontainment related event. 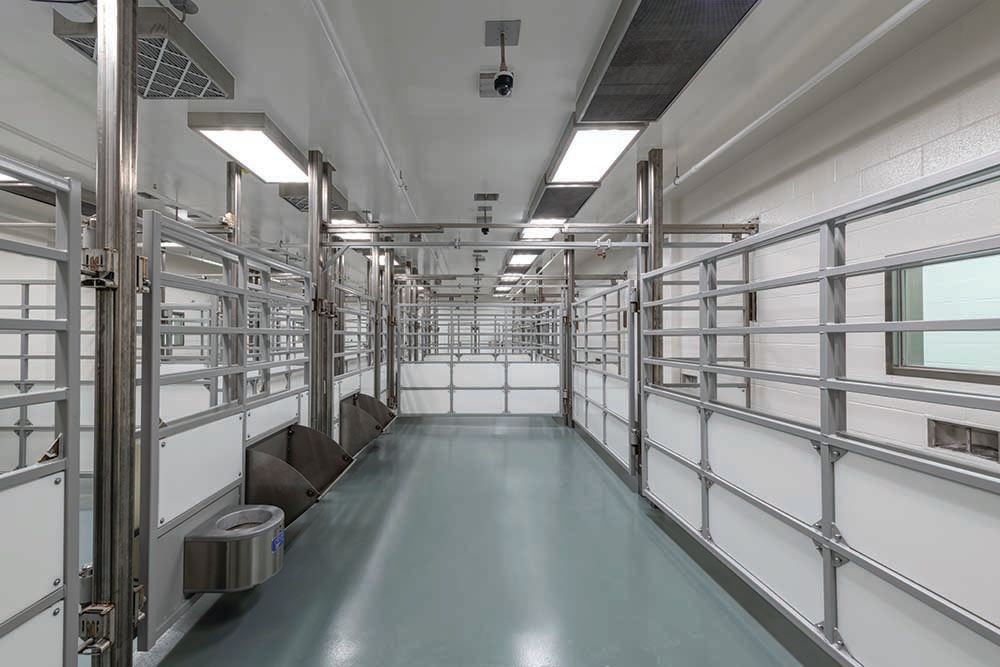 The flooring in the animal holding area is a seamless, poured in place rubber system for comfort, cleanability, and slip resistance. All penetrations are designed airtight and completely sealed.
Steinkamp Photography

Working in a high-containment facility can be both physically and mentally draining. Handling large, unpredictable animals; the proximity to potentially dangerous pathogens; and spending a large portion of the work day following stringent security protocols are things that demand a lot of energy and patience from those who work in the GHRC. Therefore, the project team sought to create an inviting space with opportunities for socialization, activity, and respite from the laboratory areas.

The main offices, break areas, and lobby were situated to face natural daylight views as much as possible, notes Leatherwood, to make things light and airy. Full-height windows were incorporated into the BSL-3 labs, which correlate to a direct connection of an exterior window of the building, allowing staff to see straight through to the green space and pond outside the building. Additionally, fabricated custom lab casework was installed to create a clean-looking space, and rounded edges and profiles were used throughout the building to prevent inadvertent animal harm or exposure of workers while cleaning. Details such as a graphic film of an animal cell on office windows, and a drain grate designed to show the Texas A&M logo, were also used to enhance the environment.

The surrounding landscape is not only beautiful, but helps provide security for a sensitive research facility. The GHRC, says Perkins&Will, is “a fantastic example of a high-security building hiding in plain sight.” It is located on a site away from the nearest road and was intentionally designed to not draw unnecessary attention to itself. It was also designed to complement its neighbor, the Texas A&M Veterinary Diagnostic Laboratory, also a Perkins&Will project. The sister buildings share a parking area and are centered on a pond water feature—an extra level of security that is more attractive and less conspicuous than a fence.

“I think the most interesting thing for us from a security standpoint was how we addressed it at the site level. This was something that was intended to have sort of a campus feel…and really be somewhat inconspicuous, set back there. They didn't want it to draw attention to itself, like a fence with razor wire all around it might do,” says Clinton. “So, the idea was to obviously fence in the rear to prevent any sort of animal escape, but on the front to make it look like it's a very welcoming facility that you would almost never know what's inside there. We used a lot of the landscaping; the pond; there's all sorts of boulders and different obstacles in there that help create a natural stand-off from the building, to keep vehicles and people from getting close to it. But you'd never know it to look at it. And that's the really interesting thing about it.”