An image of light passing through a combination of refractive and diffractive axicons, referred to as a Graxicon, shows the unusual color dispersion created by this optical system.
LLE

The University of Rochester’s Laboratory for Laser Energetics (LLE) houses a variety of unique and sought-after instruments, including the most powerful laser of any academic institution in the world. As one recent example, its OMEGA laser system was used by an international research team—including scientists from Lawrence Livermore National Lab, the French Alternative Energies and Atomic Energy Commission, and the University of California, Berkeley—to help confirm that helium rain is real, and could potentially occur on Jupiter and Saturn. The research was published by Nature in May.

OMEGA measures 10 meters tall and is approximately 70 meters in length. As explained on the LLE site, “the system delivers pulses of laser energy to targets in order to measure the resulting nuclear and hydrodynamic events. OMEGA’s 60 laser beams focus up to 30,000 joules of energy onto a target that measures less than one millimeter in diameter in approximately one billionth of a second.”

LLE is also recognized as a major training facility for those involved in high-energy-density science. The facility focuses on five primary areas of research—high-energy-density physics; plasma physics; high intensity laser-matter interaction; high-power laser research including coherence control for focal spot smoothing and controlling the laser light interaction with matter; and optical material science and technology. LLE scientists hold more than 65 patents in a wide variety of fields, and more than 14 licenses for the use of these patents in commercial products have been issued. The 2018 Nobel Prize in Physics was won by a graduate student, Donna Strickland, and her thesis advisor Gerard Moreau for inventing new ways to make ultra-high-power lasers. At the time of the award, Donna was only the third woman to win the Nobel in Physics, and the first in 58 years. 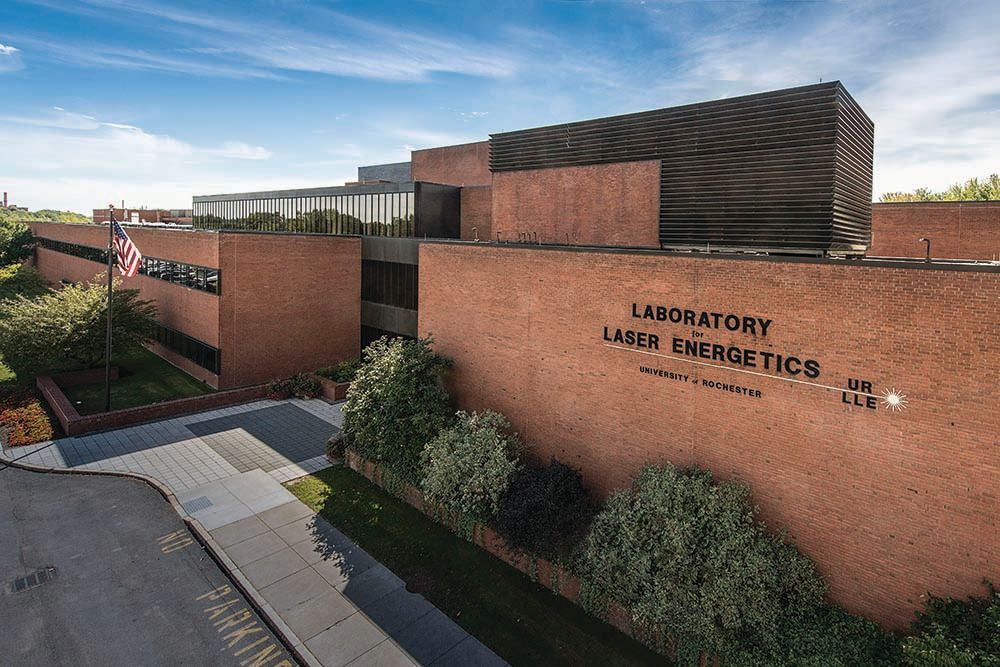 The first building of University of Rochester’s Laboratory for Laser Energetics (LLE) complex was built in 1976 to house the OMEGA laser facility and supporting research laboratories.
LLE

LLE has expanded and evolved since it first opened in 1970 as the Laser Fusion Feasibility Project. The OMEGA 24-beam laser facility was added in 1985, becoming the first ultraviolet fusion research facility. Since then, the OMEGA facility has upgraded to 60 laser beams (12 of which were used in the Nature research), and the OMEGA Extended Performance Petawatt-scale laser was completed in 2008. Due to this continued growth of the OMEGA facility, the LLE staff increased from fewer than 100 people to more than 350. There are also approximately 200 students from high school to graduate school involved in research.

And the evolution of LLE is continuing. The LLE staff is in the works of submitting a proposal to the National Science Foundation to construct a state-of-the-art, short-pulse, multi-Petawatt laser facility, referred to as EP-OPAL. As Terrance Kessler, senior research engineer and diversity manager of LLE, explains, “This mid-scale infrastructure would enable important, high-impact science that has been defined by a broad community interested in high-energy particle beams, relativistic plasma physics, ultrahigh-field science, materials science under extreme conditions, and extreme sources of x-ray, gamma-ray, and high-energy particle radiation for nuclear physics and applications. This project would establish a facility for short-pulse laser-enabled science addressing a major national need in the mission space of the National Science Foundation.”

Shining a light on issues of diversity, equity, and inclusion in science 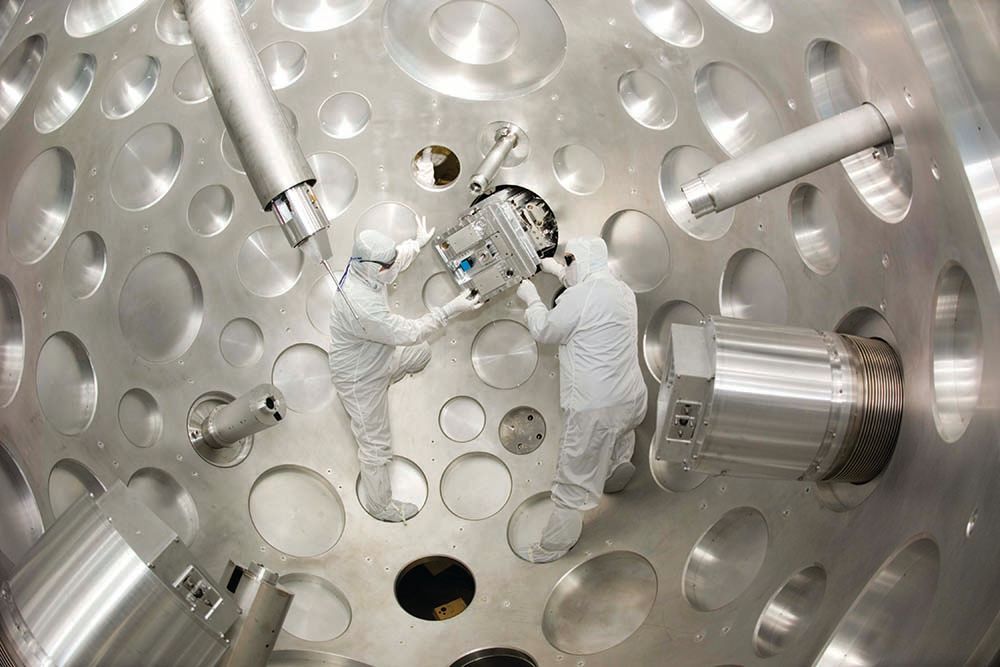 Physical expansion isn’t the only way LLE has evolved. The team at LLE is actively engaged in diversity, equity, and inclusion (DEI) programs, to ensure their facility represents a wide variety of experience, backgrounds, perspectives, and knowledge. In 2019, LLE developed its diversity council, which consists of eight scientists, engineers, and technicians. Shortly after, LLE applied to join the American Physical Society’s (APS) Inclusion, Diversity, and Equity Alliance (IDEA), and announced its acceptance into the alliance in June 2020. This program has a mission of “empowering and supporting physics departments, laboratories, and other organizations to identify and enact strategies for improving equity, diversity, and inclusion,” the site states. The LLE director, E. Michael Campbell, fully supports this move toward cultural change and has expressed his commitment to DEI, stating, “A diverse workforce is vital to a thriving science program.”

“Participation in the APS-IDEA program has provided opportunity to understand and embrace cultural change in our workplace,” says Kessler. The various discussion topics explored in our meetings, including change theory, shared leadership, institutional norms, storytelling, and recruitment pathways have helped us carry out an informed plan to create a diverse and inclusive work environment.” 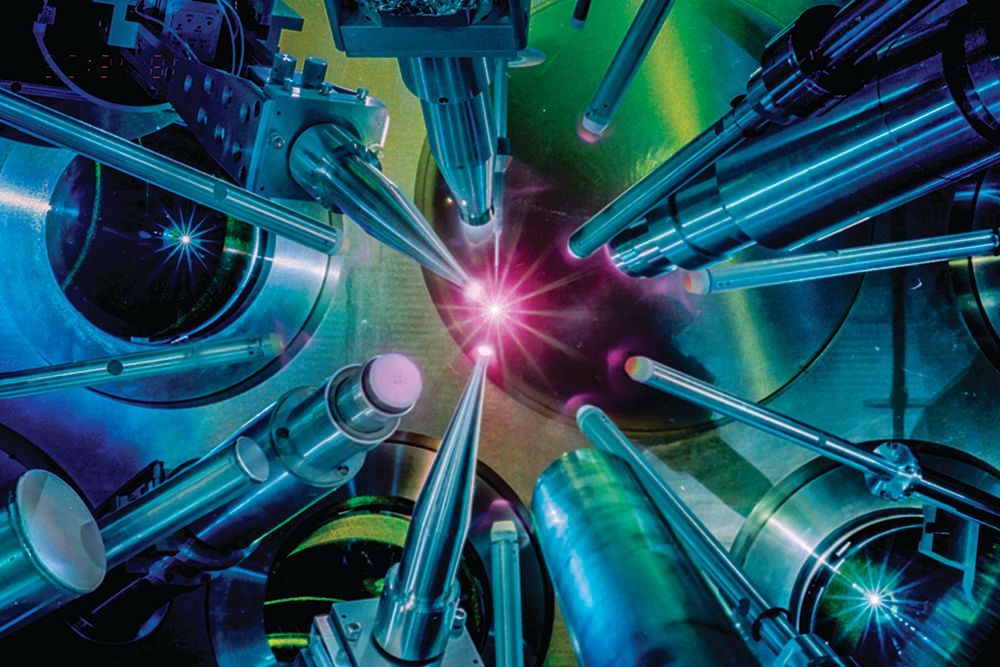 A close-up view of the inside of the OMEGA target chamber shows a spherical shell being symmetrically imploded by 60 focused laser beams along with various physics diagnostics.
LLE

Kessler, who has worked at LLE for 45 years in various roles, has now added “diversity manager” to his titles. “After completing four decades of scientific and technological research and management, I realized that I could no longer ignore the lack of diversity, equity, and inclusion in physics both in the US and around the world,” he says. “People with much more experience than myself encouraged and persuaded me to use whatever amount of privilege and power I have toward creating cultural change in the communities I live and work.”

Kessler, as diversity manager, and the diversity council lead numerous DEI initiatives for the lab, and strive to find areas of improvement toward a more inclusive culture for both lab staff and university students.

Recognizing that less than 20 percent of LLE’s approximately 400 scientists, engineers, technicians, and graduate students were women, LLE developed the WISER (Women in Science and Engineering at Rochester) program. The program, coordinated by distinguished scientist Radha Bahukutumbi, also a member of the LLE diversity council, holds workshops and offers mentorship for women graduate students and early- to mid-career researchers.

One of Kessler’s first projects as diversity manager was the development of the BEST (Broad Exposure to Science and Technology) Student Research Experience. The goal of the program is to expose local high school and first-year college students from underrepresented groups to areas of science and technology involved in laser energetics research. Through this experience, students can learn the different career opportunities available to them in a similar field. 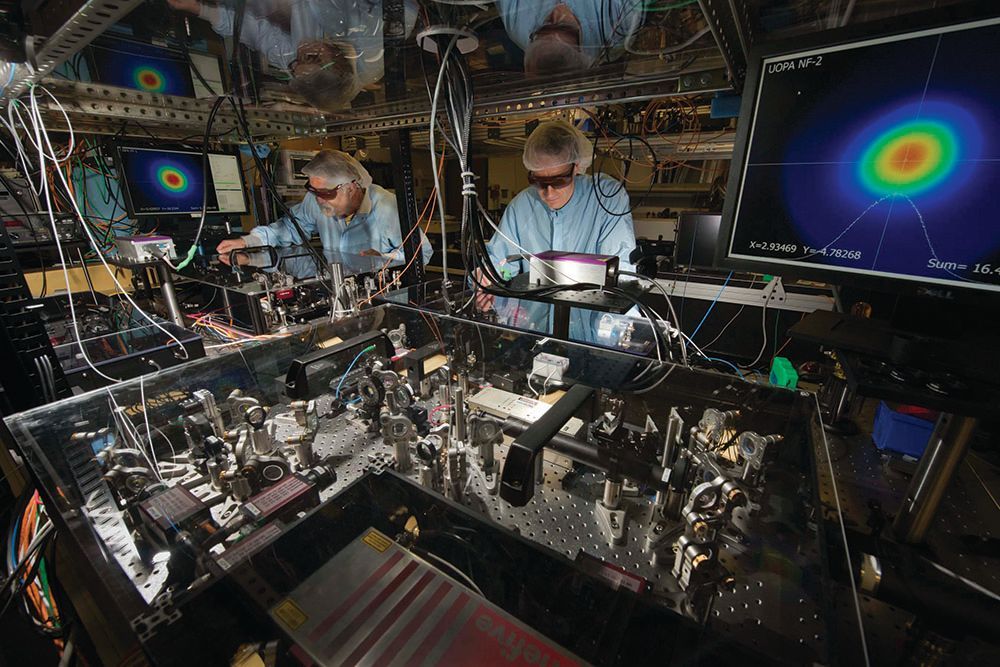 As a next step, the diversity council is hoping to develop a conference, through its collaboration with APS, for undergraduate women in physics. The lab already hosts numerous seminars on unconscious bias, IDEA programs, women in STEM, and other topics, at the university. Kessler notes that these topics are often well received, but acknowledges the sensitivity and sometimes controversial nature of addressing DEI in academic and work settings. Although conversations around DEI can feel challenging at times, it is crucial for leaders in STEM fields to participate.

“Laboratory leaders need to hold themselves accountable by first owning their current situation regarding the level of workforce diversity, how inclusive their work environment is, and to what extent they believe in maintaining equity at all levels,” says Kessler. “An institutional dashboard should be created and shared with all stakeholders and with the external community. They need to own the truth and be willing to share the rate at which workforce diversity changes; either increasing or decreasing.”

As Kessler explains, LLE has introduced leadership accountability by including elements of DEI into employee self-assessment and performance evaluation processes. “DEI is now embedded in this process, and each employee is given the opportunity to consider their role in creating cultural change in the workplace.”