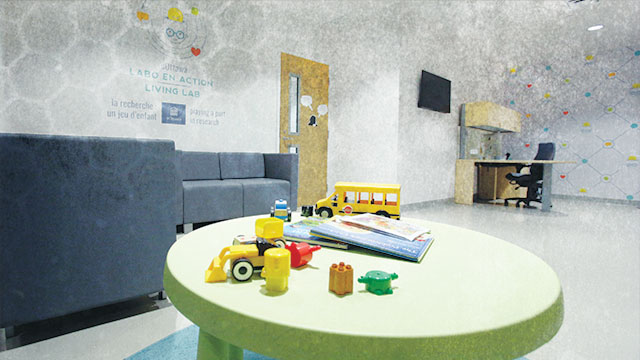 Families planning a visit to the newly renovated Canada Science and Technology Museum in downtown Ottawa now have the opportunity to participate in cutting-edge scientific research.

The Living Lab, which is the product of a collaboration between the University of Ottawa and the Canada Science and Technology Museum, is transforming the way language and cognitive development research is done. Founded by three University of Ottawa professors, the lab is unique because it offers families who are visiting the Science and Technology Museum a dynamic, interactive, and playful environment that kids of varying ages can enjoy while researchers collect data and observe trends of how children learn. It also allows parents the chance to chat directly with the researchers to learn more about the science behind how their children grow and develop.

The founders include Cristina Atance, professor of psychology in the Faculty of Social Sciences at the University of Ottawa; Tania Zamuner, professor of linguistics in the Faculty of Arts; and Chris Fennell, also a professor of psychology. Fennell has been specializing in infant bilingualism for more than a decade and studies the process of language learning in infants as young as three months old. Atance focuses on the cognitive abilities of toddlers, and Zamuner’s research includes language acquisition in preschoolers.

“The most unique aspect of the lab to me is that we’re ‘demystifying science’ and making it accessible and transparent to all guests visiting the museum,” says Fennell.

The timing for the idea of the Living Lab couldn’t have been more perfect, according to Fennell. The museum recently underwent a significant $80.5 million renovation, which allowed the design of the Living Lab to fit seamlessly with the rest of the exhibits and attractions of the museum. The upgraded museum—and the Living Lab—have been open to the public since November 2017. The Living Lab encompasses 750 square feet of state-of-the-art study space within the museum. To the founders’ knowledge, the Living Lab is the largest of its kind in North America. However, the team found inspiration for its development through similar facilities located in Boston in the US and in Vancouver, Canada. The Living Laboratory at the Museum of Science in Boston was initiated in 2005 to be used as a model for scientists around the world to develop their own Living Labs, just like Atance, Zamuner, and Fennell have done. According to Zamuner, the Living Laboratory in Boston was key to the successful creation of the Living Lab in Ottawa. The Boston lab was a great resource because it provided essential elements needed to create an interactive research environment geared toward children, as well as an example of goals for both public and professional audiences. The Ottawa team also visited a similar lab in Vancouver to get a firsthand look at how to manage this type of facility, which unlike most labs, is open to the public.

Managing a lab that is open to the public does present a unique set of challenges. In a traditional lab, researchers can control the type of participants involved in a study. But as Fennell explained, every day at the Living Lab is different, and the researchers never know what ages of children, or how many, they will receive. But these challenges ultimately become an asset, forcing the researchers to be innovative, think creatively, and push the boundaries of research methodologies.

To collect the data the researchers are looking for, they must engage children in fun games and problemsolving tasks. The games performed at the Living Lab generally last just about five minutes each, so families still have plenty of time to explore other areas of the museum. Parents can observe the process through glass walls or Skype video, and the researchers explain exactly what they are studying and what different responses from their children mean.

“We have seen many repeat participants coming back to visit the museum,” says Fennell. Repeat guests allow the researchers to collect additional data on the same participant and note any changes or trends. As of April 2018, the team had already worked with a total of about 700 participants.

One of the experiments that Zamuner conducts seeks to determine whether repeating words actually helps a child learn and retain vocabulary. She does this by introducing a child participant to a “sleeping” stuffed bear named Mr. Wiggles, who enjoys learning new words. While Mr. Wiggles sleeps, the child is shown a series of images on a computer screen. During the training, the child is asked to either say the image of the word on the screen (what Zamuner refers to as a produced condition) or to listen when the computer presents prerecorded words (a heard condition). The child is then instructed to “wake up” Mr. Wiggles and tell him as many words as they can remember. Zamuner compares the number of words recalled from the produced vs. heard conditions.

“The results will lead to a better understanding of how speech production can be used as a tool for clinical assessment and therapy,” says Zamuner. “The findings will also be relevant to software developers working on automatic speech recognition systems that enable players to control gameplay through their own speech.”

The Living Lab is also equipped with some of the latest instruments and technologies, such as eye-tracking software, which can assist the researchers in measuring participants’ engagement and retention during experiments.

Noting that the Living Lab in Ottawa is still in an infancy stage itself, Fennell and Zamuner outlined some of the long-term goals and vision for the lab. First, they emphasized the importance of expanding their existing collaboration. The team hopes to recruit more researchers in different fields and specialties to ensure a wellrounded experience for children of all ages. By widening the age range of participants and testing out new experiments, the researchers will gain deeper insights into how children learn. This goal will be accelerated through a collaborative university grant, according to Fennell.

Zamuner noted that one of the unexpected rewards of working at the lab has been observing how well undergraduate and graduate students at the University of Ottawa have done assisting with the research and interacting with the public.

“They have accepted the challenge of conducting the experiments, and [they] properly explain the results and process to not only the parents but [to] the general public,” says Zamuner. If more university students join the Living Lab team, Zamuner envisions them acting as hosts for community groups and giving tours of the museum. She also discussed the potential of having “Ask the Scientist” stations positioned throughout the museum, so that guests have even more access to researchers.

As the team continues to grow, the Living Lab’s research results will prove to be especially useful as the next generation of children grow up in an ever-advancing digital age. So far, the benefits of the Living Lab have been two-fold—researchers gather the findings they need, while parents become more educated about their children’s development.

Children Eat What They Like, but Food Intake Driven More by What They Dislike

Children Eat What They Like, but Food Intake Driven More by What They Dislike

Learning in the Lab Can Continue at a Distance

Learning in the Lab Can Continue at a Distance

Academic Education Can Positively Affect Aging of the Brain

Academic Education Can Positively Affect Aging of the Brain