Brain disorders encompass an incredibly broad range of conditions, including amyotrophic lateral sclerosis, Parkinson’s, autism, dementia, epilepsy, chronic migraines, multiple sclerosis, and many more. In fact, according to the American Brain Foundation, one in six people live with some form of brain disease. Although the prevalence of these diseases and disorders only continues to increase, treatment options are severely lacking, making investments in research even more vital to help mitigate, and eventually find cures, for these diseases.

The Harvard Brain Tissue Resource Center (HBTRC) at McLean Hospital plays a key role in enabling researchers to better understand the complex intricacies of all types of brain disorders. The HBTRC is one of the oldest brain donation banks in the country—since its inception in 1978, the facility has collected more than 9,000 brain specimens from human donors. It is also one of six core brain tissue repositories in the US, collectively known as the NeuroBioBank, an NIH-funded network. 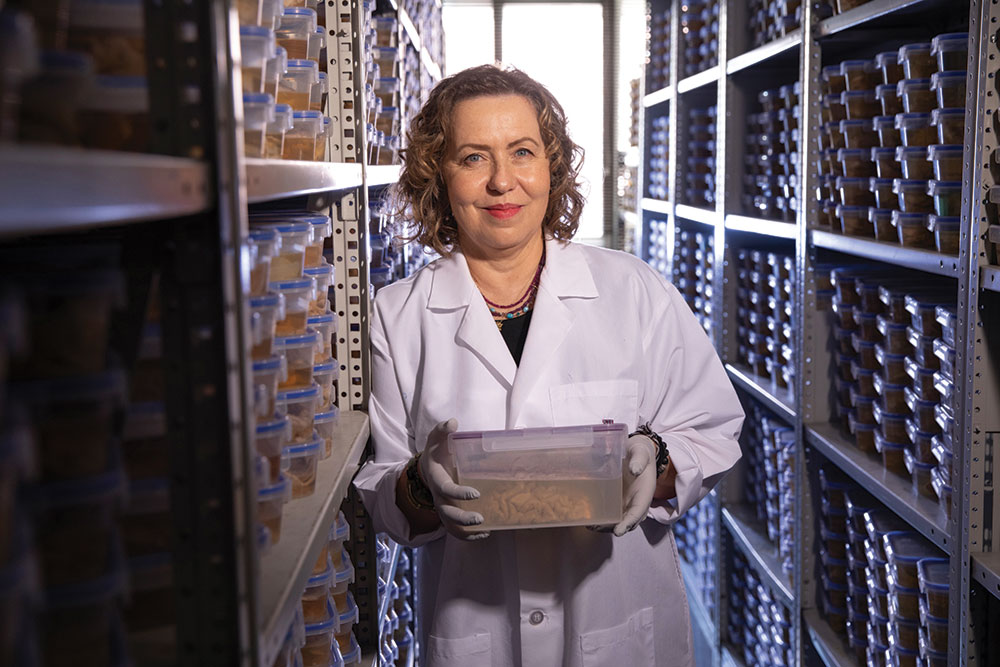 Sabina Berretta, MD, is the director of the HBTRC, and has more than 20 years of experience researching the pathophysiology of brain disorders. “The complexity of these disorders demands a multifaceted approach, from clinical and genetic studies to investigations on the human brain, as well as in vitro and experimental animal models,” says Berretta. “Postmortem human brain studies play a fundamental and critical role in these efforts, as they offer a unique window on the molecular and cellular underpinnings of brain disorders.”

As Berretta explains, the HBTRC accepts brain donations from a variety of donors, including those suffering from neurodegenerative disorders like Alzheimer’s, Huntington’s, and Parkinson’s diseases; psychiatric disorders such as schizophrenia, bipolar disorder, and post-traumatic brain disorder; and neurodevelopmental disorders including autism, Down syndrome, and Rett syndrome. Donations are also collected from donors without any brain disorders. “These are just as precious, as they are not only included in all brain disorder studies, but also provide an invaluable resource to study the human brain,” says Berretta.

Researchers from across the US and internationally request samples from these brain donations in an effort to answer some of the most complex questions surrounding the human brain and the pathophysiology of brain disorders. In 2019, the HBTRC distributed a total of 2,076 specimens to 56 different research groups around the globe. 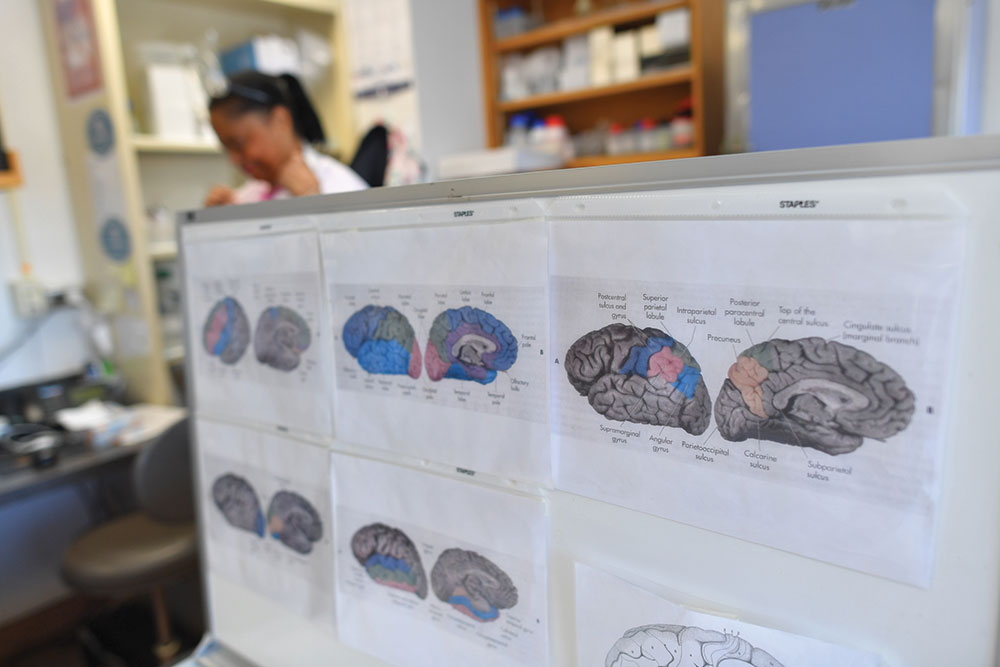 The HBTRC plays a key role in enabling researchers to better understand the complex intricacies of all types of brain disorders.
HARVARD BRAIN TISSUE RESOURCE CENTER

In September 2019, the HBTRC, as well as the other five NueroBioBank network facilities, received a second cycle of NIH funding. The new contract totals more than $12 million, and will be dispersed over the course of five years. According to Berretta, the funds will allow her team to expand their work, increasing the number of specimens they are able to acquire, and will allow for additional quality control measures and donor phenotype characterization. This continued funding is also crucial to maintaining collaboration between the six NeuroBioBank sites—an important factor that cannot be stressed enough, says Berretta. “It not only presents immediate direct advantages to investigators, as the different sites work together to address tissue requests, but also provides a forum for pursuing state-of-the-art approaches to tissue banking.”

A previous cycle of NIH funding, which ran from 2013-2019, enabled the HBTRC to collect 100 brains per year. This new contract will fund 180 brains per year, and allow for several new procedures to enhance the center’s mission, according to a press release announcing the new funding. The new NIH contract also includes a mandate to recover brain donations from people who suffered from substance misuse, particularly opioid use disorder, and from those who died of opioid overdose, the press release states. 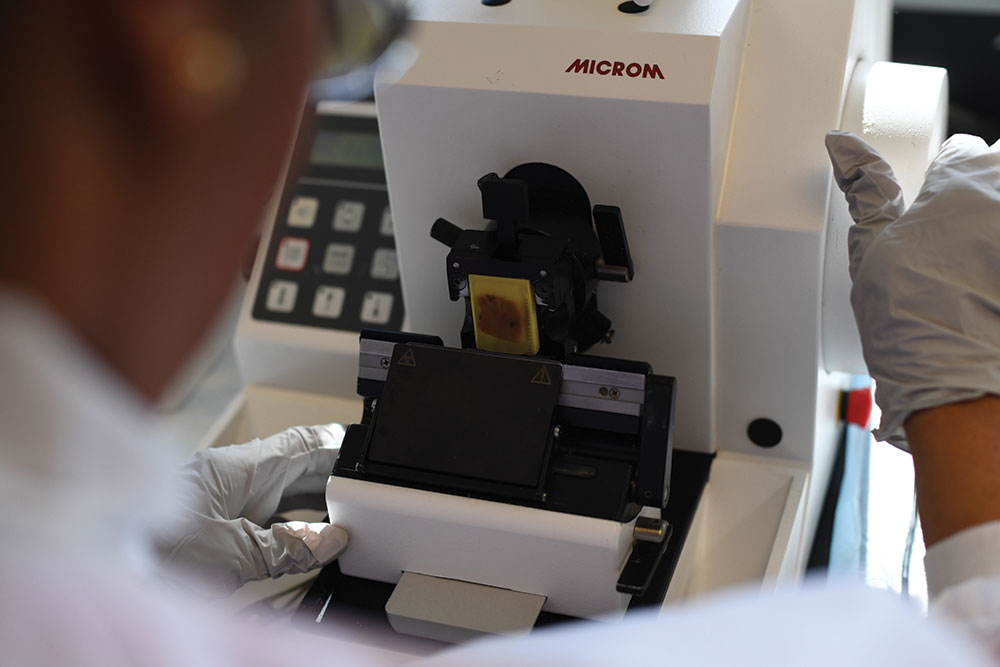 Since many studies can be carried out on a very small amount of tissue, each donated brain provides a large number of samples for many researchers.
HARVARD BRAIN TISSUE RESOURCE CENTER

Why is a facility like the HBTRC and its associated research important? The impact is two-fold, according to Berretta. The first is that “we lack effective treatment for virtually all brain disorders,” she says. According to Berretta, researchers need to gain a better understanding of brain disorders at the circuit, cellular, and molecular level to be successful in developing new and more effective treatments that can precisely target a specific disorder’s underlying pathology. The second—and equally important priority—revolves around changing the overwhelming stigma placed on those with certain brain disorders. “Many brain disorders, particularly psychiatric disorders, are still widely and erroneously understood as ‘behavioral’ disorders—that is lacking biological causes. This view inevitably leads to stigmatization, to the dangerous implication that those who suffer from them should be able to will themselves to health. Illuminating the underlying biological underpinnings of these disorders, the objective brain changes that cause the symptoms, is a powerful antidote against stigmatization,” explains Berretta.

A need for donors 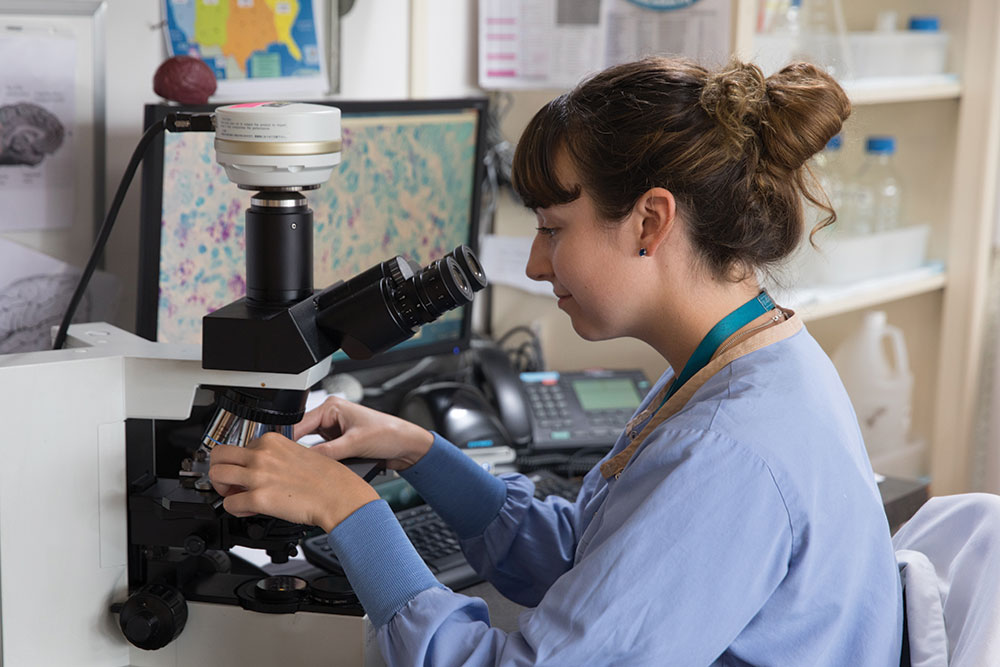 The HBTRC recently received a new NIH contract that will fund 180 brains per year, and allow for several new procedures to enhance the center’s mission.
HARVARD BRAIN TISSUE RESOURCE CENTER

Currently, the HBTRC has about 6,000 brains stored on-site, but continuously receiving enough donations to meet the demand from investigators across the globe remains a top challenge for the facility. New techniques and methodological approaches enable scientists to conduct more complex studies and work with a larger number of cases to explore new and important questions. “Recently developed methodological approaches, such as RNAseq and single-cell RNAseq, are providing powerful new tools to investigate brain disorders using postmortem human brains, bringing us closer to being able to answer key questions, such as the relationship between genetic vulnerabilities and brain pathology,” says Berretta. But without a sufficient collection of samples, these teams cannot follow through on their work.

“The ability to directly study the human brain, at the high level of resolution and sophistication afforded by well-characterized human brain specimens, is a necessary condition to our understanding of brain disorders and our potential to develop improved treatments,” says Berretta. 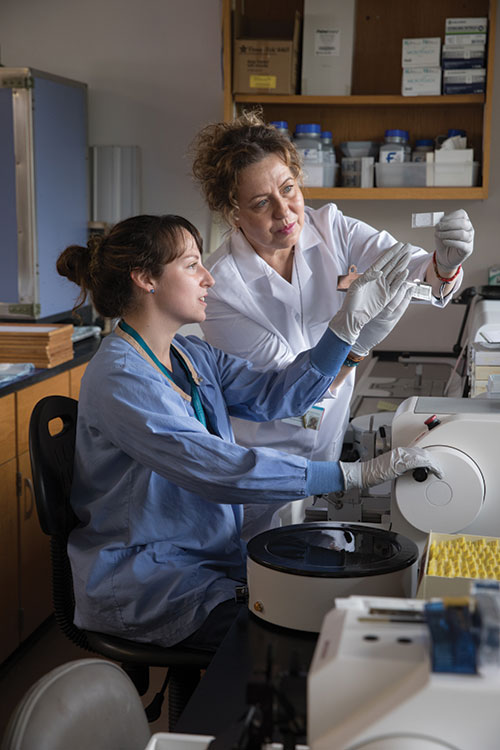 In 2019, the HBTRC distributed a total of 2,076 specimens to 56 different research groups around the globe.
HARVARD BRAIN TISSUE RESOURCE CENTER

Preserving sensitive brain tissue samples requires a heightened level of care. First, the samples are transported to the HBTRC facility in special kits that immerse the samples in ice. Minimizing the time between death and the time the HBTRC staff completes dissection and storage of the samples is crucial, as tissue samples deteriorate quickly. “We use a ‘cold dissection’ protocol to protect the samples and, of course, use universal precautions including appropriate personal protective equipment at all times to protect our staff from potential infection,” explains Berretta. “Once dissected, one half of the brain is quickly frozen in liquid nitrogen vapors and stored at -80°C in dedicated freezers, and the other half is placed in fixative and used for neuropathology. Both preparations are eventually made available for distribution to investigators.” Berretta adds that all samples are tested for toxicology and serology, and a neuropathology report is issued for each donor and shared with their family.

This process is a delicate balancing act, and requires staff members and teams of pathologists across the country to be on-call for donation pickups 24/7. However, as has been the case with nearly all research facilities so far this year, the COVID-19 pandemic has led to new challenges for HBTRC as well. “On the one hand, it is critical that the effects of SARS-CoV-2 on the brain are investigated. Emerging but indirect evidence suggests that these effects may be significant, both on otherwise healthy people and on those already suffering from specific brain disorders. Collecting brains from victims of the COVID-19 pandemic is thus of urgent importance,” says Berretta. “On the other hand, priority needs to be placed on safe tissue recovery, implementing all precautions needed to keep personnel safe and avoid further spread of the disease.”