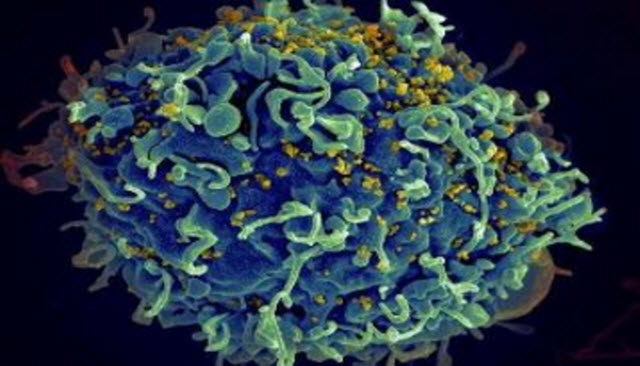 Blocking the step when viruses (in yellow) infect a cell could be a new strategy for fighting a wide range of diseases.Image Courtesy of: Seth Pincus, Elizabeth Fischer and Austin Athman, National Institute of Allergy and Infectious Diseases, National Institutes of Health

Scientists and health officials are marshalling forces to fight Zika, the latest in a string of recent outbreaks. Many of these efforts target that virus specifically, but some researchers are looking for a broader approach. Now one team reports in ACS’ journal Macromolecules a new strategy to fight a wide range of viruses that appears to be safe in vivo and could evade a virus’s ability to develop resistance.

Viruses are wily foes. They come in different forms, mutate rapidly and develop resistance to drugs easily. To fight them, scientists have largely attempted to tackle them one by one. But there are still no treatments for many viral infections, such as dengue and Ebola, even though some have been around for decades. A new approach aims to act more broadly against multiple viruses and involves targeting both viral surfaces and human cells. This strategy could also stop the pathogens in a way that could avoid the development of resistance. But so far, these methods have been toxic to healthy mammalian cells. Yi Yan Yang, Naoki Yamamoto, James Hedrick and colleagues wanted to find a safer method.

The researchers started with a polymer, called polyethylenimine (PEI), that had prevented viral infection through electrostatic interactions in previous studies. The PEI in those studies, however, was toxic to cells. So Yang and her collaborators modified it with mannose, a kind of sugar. The resulting complex interacted with the surfaces of both viral and human cells, and thus blocked the viruses from infecting the cells in lab testing. The researchers say this interaction can happen regardless of mutations and would make it difficult for a pathogen to sidestep. After two weeks of testing in an animal model, the modified PEI showed no toxic effects.

The authors acknowledge funding from the Institute of Bioengineering and Nanotechnology, the National University of Singapore and the IBM Almaden Research Center.