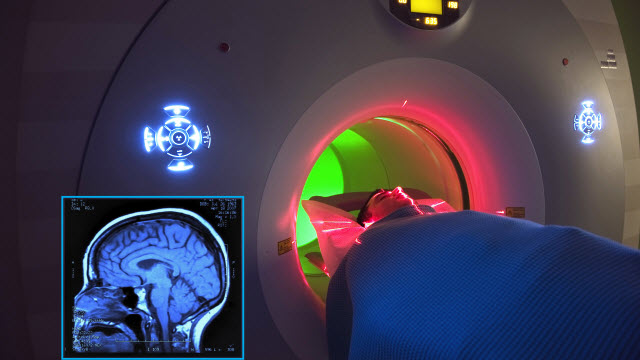 NIH-supported researchers at Massachusetts General Hospital (MGH) are studying an alternative to the contrast agents currently used for magnetic resonance imaging. In a recent study, they showed that the experimental alternative, a manganese-based compound, performs as well as approved contrast agents. Their study appeared online Nov. 15, 2017, in Radiology.

Magnetic resonance (MR) images are taken so that a clinician can view various tissues inside the body. Often, they are taken without a contrast-enhancing agent, but four in ten MR procedures require injection of a contrast agent to view anatomical structures and indications of disease or injury.

All currently approved contrast agents contain the chemical element gadolinium, which is toxic in its free form. To make gadolinium safe for use in humans, it is tightly held by a binding agent, or chelator, to prevent the metal from depositing in the body. However, some recent studies have raised concerns that not all the gadolinium injected for the scan is eliminated from the body, and that traces of gadolinium left in tissues may cause harm in the long term. Further, some patients with impaired kidney function may be adversely affected by gadolinium-based contrast, so this group of patients cannot get the imaging scans that would help their doctors in treating them.

“As concern about gadolinium-based contrast continues, it is going to be important that other options can be advanced and approved for medical imaging,” said Shumin Wang, Ph.D., director of the National Institute of Biomedical Imaging and Bioengineering (NIBIB) program in Magnetic Resonance Imaging. “A compound that offers equivalent or better enhancement and that is efficiently filtered from the body after imaging could offer great reassurance to doctors and patients alike.”

The MGH team, led by senior author Peter Caravan, PhD, co-director of the Institute for Innovation in Imaging at MGH and associate professor of radiology at Harvard Medical School, performed a study to determine whether gadolinium could be matched in effectiveness by a manganese-based alternative. Unlike gadolinium which is not naturally present in the body, manganese is an essential element vital for life.

“We aimed to address the unmet need for contrast enhanced imaging in renally impaired patients.” said Caravan, “Our manganese-based contrast agent was designed to be directly equivalent to current contrast agents, and to improve safety by utilizing the biocompatible manganese ion and by eliminating the contrast agent from the body via both the liver and the kidneys.”

The researchers performed imaging of laboratory baboons using MRI machines that are commonly available in hospitals. The study compared their new manganese-based contrast agent to one of the clinically used gadolinium contrast agents. The imaging focused on the torso, including cardiovascular structures and the animal’s kidneys and liver. An expert radiologist evaluated the resulting images and determined that both contrast agents produced strong enhancement of scans that included major arteries, kidneys, livers and abdominal muscles. Quantitative analysis of the images indicated that they were equivalent.

Equivalent detail is visible in contrast-enhanced magnetic resonance abdominal images. They show the abdominal aorta, renal arteries, and kidneys of a baboon. The image on the left is made with a manganese-based agent, while the image on the right is of the same animal but made using a gadolinium-based contrast agent.Credit: Eric Gale, PhD, Martinos Center for Biomedical Imaging, Massachusetts General HospitalPrevious studies in mice had shown that the manganese-based compound did not leave traces in tissue and that the liver and kidneys eliminated more than 99 percent of the contrast within 24 hours. MRI showed that the baboons’ kidneys and livers efficiently excreted the manganese-based contrast agent. The researchers did not find traces of manganese accumulation in tissues.

Further studies are required to assure safety of the manganese-based contrast prior to human trials.