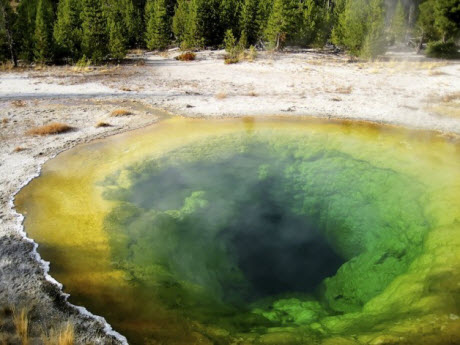 CinderBio’s enzymes come from extremophiles found in hot volcanic waters, like this thermal pool in Yellowstone National Park.Photo courtesy of Lawrence Berkeley National LaboratoryIt’s no secret that extremophiles, or microbes that live in places like polar glaciers and toxic waste pools, may hold treasures worth billions to modern industry. For years, researchers and biotech companies have been “gene prospecting” in extremophiles, looking for DNA they can exploit to make enzymes for everything from laundry detergent to renewable biofuels. Yet when it came to heat and acid resistant enzymes, results have been wanting—until now.

Basic biology research at Lawrence Berkeley National Laboratory (Berkeley Lab) has led to the formation of Cinder Biological, or CinderBio, a startup company producing a new class of enzymes made from microbes that thrive in hot volcanic waters. Co-founded by Berkeley Lab scientists Steve Yannone and Jill Fuss, CinderBio will first target the food processing industry, where its enzymes can significantly reduce the vast amounts of chemicals and water used to clean equipment. Eventually it expects to formulate enzymes for the biofuels, paper, and textile industries, and possibly even more.

“Our enzymes are unique—they can operate in conditions that nobody else’s can, so this opens up a lot of previously unexplored applications,” said Fuss, a molecular biologist and the company’s chief technology officer. “They’re made from microbes that come from Yellowstone and live in hot acidic pools, so they thrive in nearly boiling acid. We’ve been able to take gene sequences and make them into enzymes that are extraordinarily stable.” 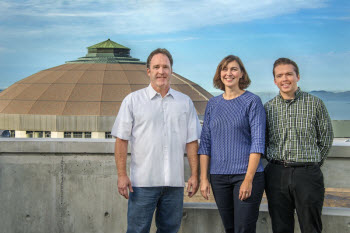 (From left) Steve Yannone, Jill Fuss and Adam Barnebey.Photo credit: Roy Kaltschmidt/Berkeley LabCinderBio won a cash prize in the 2014 FLoW DOE National Clean Energy Business Plan Competition at Caltech. It was also was one of eight technologies selected to be a project for the Fall 2013 UC Berkeley Haas School of Business Cleantech to Market program that seeks to translate cleantech research into market opportunities.

This year, with a SBIR (Small Business Innovation Research) Phase 1 grant from the National Science Foundation, CinderBio tested its technology at a local creamery. The cleaning of dairy and other food processing equipment is normally a multi-step process. “They use a lot of base, then they wash, then acid, then wash, then sanitizer,” said Fuss. “It takes a lot of time and uses a lot of chemicals and water. The microbes in the equipment can be hard to get rid of, so in some areas they’ve started to use harsher chemicals to combat those biofilms.” 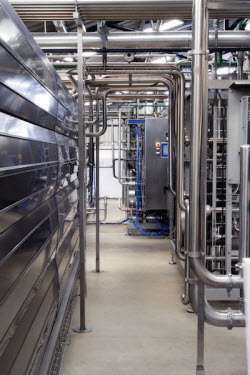 Using CinderBio’s enzymes to clean food processing equipment, like at this milk processing plant, can save considerable water, time, and energy and avoid use of chemicals.Photo courtesy of Lawrence Berkeley National LaboratoryIn the field trials, using CinderBio’s enzymes to do the cleaning in place of chemicals, Yannone, a named inventor and the company’s CEO, said he was amazed at how successful they were. “I came back after our first trials and recalculated everything because I thought we had moved a decimal point,” he said. “We reduced water usage by almost 30 percent and our enzymes removed contaminants much faster and much more effectively than we had expected. The managers and owner at the creamery were all very excited by our results.”

Enzymes are naturally occurring molecules that act as catalysts to activate or speed up biochemical reactions; their use in industry is commonplace and usually beneficial to the environment since they can replace or reduce the use of chemicals or allow processes to take place at lower temperatures, lowering energy use.

CinderBio’s technology comes from extremophilic microbes that grow naturally in thermal pools and have been studied for many years. The Berkeley Lab team was able to exploit aspects of the biology of these extreme microbes to turn them into enzyme-making machines. They developed a set of genetic tools that allow them to introduce naturally occurring genes into these microbes to produce enzymes that are more heat- and acid- stable than what has been available.

“Historically scientists have thought that all the information needed to make an active enzyme is entirely encoded in the DNA sequence,” said Yannone. “Some of our revelations center on the idea that that’s not true, that there are other components in a microbe making an enzyme that’s stable and works in hot acid other than just the DNA sequence.”

Yannone and Fuss first started studying the microbe about 10 years ago, looking for the fundamental biological processes that allowed it to thrive in such extreme conditions. Although scientists are still investigating what exactly confers such extreme stability on the microbe, Fuss was able to characterize the structural biochemistry of one of the enzymes. And Yannone, working with his undergraduate student then technician, Adam Barnebey, developed the molecular biology system that led to the formation of CinderBio.

Their invention was patented by Berkeley Lab, and Barnebey was the company’s first employee. They are under consideration for a Phase 2 SBIR grant and next year may seek additional outside funding. They plan to further refine the platform and scale up production while seeking practical feedback from the food processing industry, a vast market.

“We think a lot about what we eat and how our food is grown, but we don’t think about what happens in the middle,” Fuss said. “Our technology helps make food processing more sustainable and could be used for any food product that goes in a container and ends up on a shelf.”

Besides saving water and time, use of CinderBio’s enzymes would also cut down on chemical waste. Chemical wastewater cannot be reclaimed and instead often has to be trucked off-site. Replacing these chemicals with biodegradable CinderBio enzymes makes that wastewater reclaimable, of particular importance given the ongoing drought in California.

“It’s great when Berkeley Lab scientists are able to transform their fundamental research into an innovative technology that not only solves industry challenges but also contributes to our country’s energy and environmental challenges,” said Elsie Quaite-Randall, Berkeley Lab’s Chief Technology Transfer Officer.