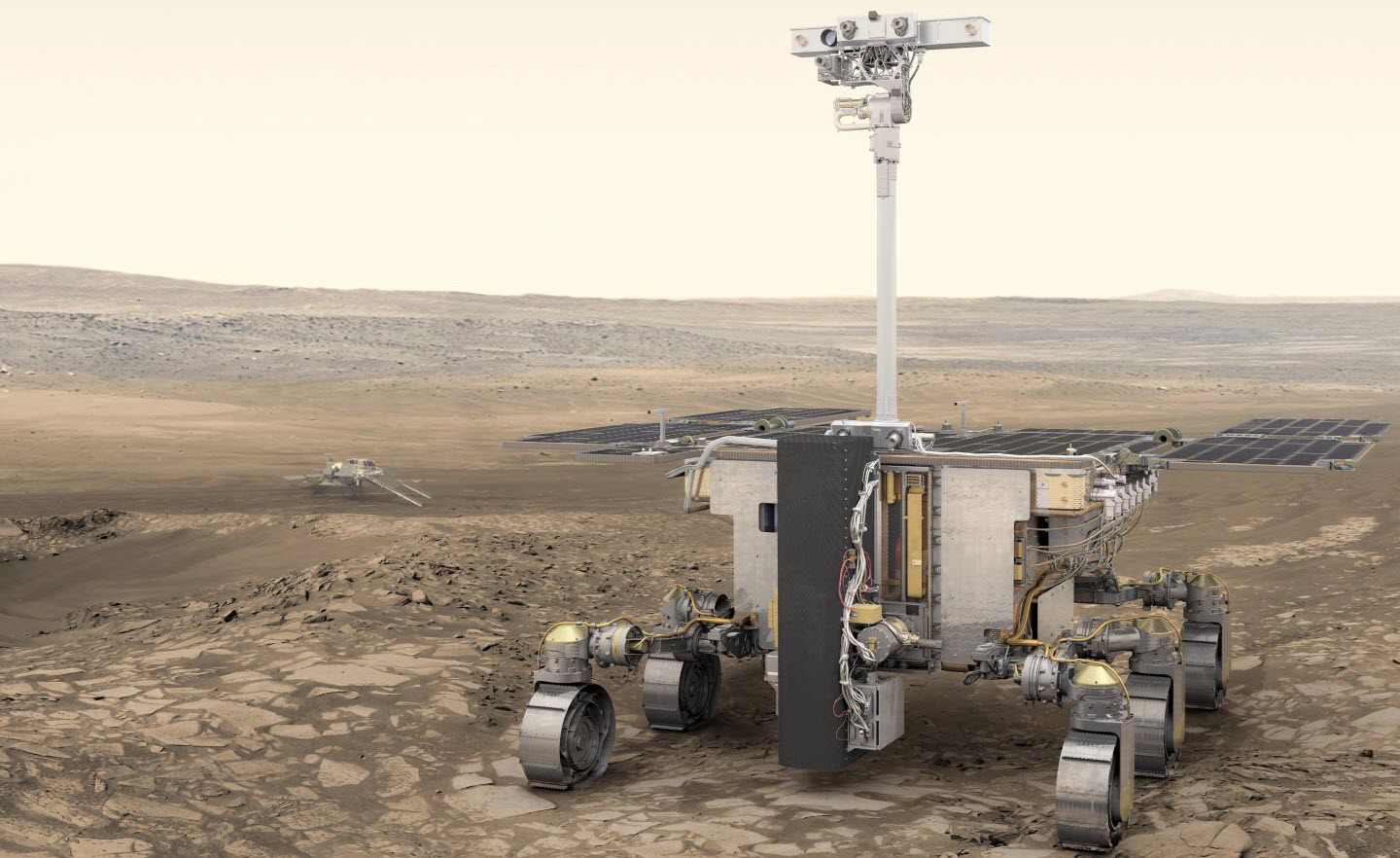 NASA has stepped closer to allowing remote onboard computers to direct the search for life on other planets. Scientists from the NASA Goddard Space Flight Center have announced first results from new intelligent systems, to be installed in space probes, capable of identifying geochemical signatures of life from rock samples. Allowing these intelligent systems to choose both what to analyse and what to tell us back on Earth will overcome severe limits on how information is transmitted over huge distances in the search for life from distant planets. The systems will debut on the 2022/23 ExoMars mission, before fuller implementation on more distant bodies in the Solar System.

Presenting the work at the Goldschmidt Geochemistry conference, lead researcher Victoria Da Poian said, "This is a visionary step in space exploration. It means that over time we'll have moved from the idea that humans are involved with nearly everything in space, to the idea that computers are equipped with intelligent systems, and they are trained to make some decisions and are able to transmit in priority the most interesting or time-critical information."

"It costs a lot of time and money to send the data back to Earth which means scientists can't run as many experiments or analyze as many samples as they would like. By using AI to do an initial analysis of the data after it is collected but before it is sent back to Earth, NASA can optimize what we receive, which greatly increases the scientific value of space missions."

Da Poian and Lyness (both at NASA's Goddard Space Flight Center), have trained artificial intelligence systems to analyze hundreds of rock samples and thousands of experimental spectra from the Mars Organic Molecule Analyzer (MOMA), an instrument that will land on Mars within the ExoMars Rosalind Franklin Rover in 2023. MOMA is a state-of-the-art mass spectrometer-based instrument, capable of analyzing and identifying organic molecules in rocks samples. It will search for past or present life on the Martian surface and subsurface through analysis of rock samples. The system to be sent to Mars will still transmit most data back to Earth, but later systems for the outer solar system will be given autonomy to decide what information to return to Earth.

First results show that when the system's neural network algorithm processes a spectrum from an unknown compound, this can be categorized with up to 94 percent accuracy and matched to previously seen samples with 87 percent accuracy. This will be further refined until being incorporated into the 2023 mission.

"What we get from these unmanned missions is data, lots of it; and sending data over hundreds of millions of kilometers can be very challenging in different environments and extremely expensive; in other words, bandwidth is limited. We need to prioritize the volume of data we send back to Earth, but we also need to ensure that in doing that we don't throw out vital information. This has led us to begin to develop smart algorithms which can for now help the scientists with their analysis of the sample and their decision-making process regarding subsequent operations, and as a longer-term objective, algorithms that will analyse the data itself, will adjust and tune the instruments to run next operations without the ground-in-the-loop, and will transmit home only the most interesting data."

The team used the raw data from initial laboratory tests with an Earth-based MOMA instrument to train computers to recognize familiar patterns. When new raw data is received, the software tells the scientists what previously encountered samples match this new data.

"The mission will face severe time limits. When we will be operating on Mars, samples will only remain in the rover for at most a few weeks before the rover dumps the sample and moves to a new place to drill. So, if we need to retest a sample, we need to do it quickly, sometimes within 24 hours. In the future, as we move to explore the moons of Jupiter such as Europa, and of Saturn such as Enceladus and Titan, we will need real-time decisions to be made onsite. With these moons, it can take five to seven hours for a signal from Earth to reach the instruments, so this will not be like controlling a drone, with an instant response. We need to give the instruments the autonomy to make rapid decisions to reach our science goals on our behalf."

Lyness commented: "When first gathered, the data produced by the MOMA life-searching instrument is difficult to interpret. It will not shout out, 'I've found life here,' but will give us probabilities which will need to be analyzed. These results will largely tell us about the geochemistry that the instruments find. We're aiming for the system to give scientists directions, for example our system might say, 'I've got 91 percent confidence that this sample corresponds to a real world sample and I'm 87 percent sure it is phospholipids, similar to a sample tested on July 24th, 2018 and here is what that data looked like.' We'll still need humans to interpret the findings, but the first filter will be the AI system."

The researchers note that data is expensive to send back from Mars, and gets more expensive as landers get further from Earth. "Data from a rover on Mars can cost as much as 100,000 times as much as data on your cell phone, so we need to make those bits as scientifically valuable as possible," said Lyness.

Commenting, Dr. Joel Davis (postdoctoral researcher in planetary geology at the Natural History Museum, London, who was not involved in this work) said: "One of the main challenges for planetary missions is getting the data back to Earth—it costs both time and money. On Mars, the travel time delay is around 20 minutes and this gets more the further you go out in the solar system. Given the finite lifespans of missions, scientists have to be very selective about the data they chose to bring back. These results certainly seem promising; having greater autonomy onboard spacecraft is one way of ensuring the usefulness of the data returned."

The Goldschmidt conference thanks the NASA Goddard Space Flight Center for their assistance in the preparation of this material. ExoMars is a joint European-Russian, European Space Agency-Roskosmos project. One of the central goals of the mission is to search for traces of past and present life. A key instrument is the Mars Organic Molecule Analyser (MOMA), which is a joint German-French-American investigation led by the Max Planck Institute for Solar System Research in Göttingen.

The Goldschmidt conference is the world's main geochemistry conference, hosted by the Geochemical Society and the European Association of Geochemistry. Held annually, it covers such material as climate change, astrobiology, planetary and stellar development and conditions, chemistry of Earth materials, pollution, the undersea environment, volcanoes, and many other subjects. For 2020 the scheduled Hawaii congress was moved online, taking place from 21-26 June, see https://goldschmidt.info/2020/index. Future congresses are in Lyon, France (2021) and the rescheduled Hawaii congress (2022).