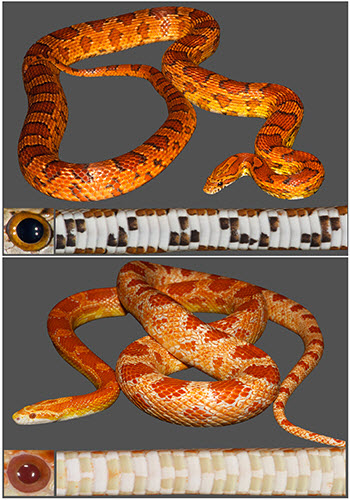 (Above) Wild-type corn snakes typically exhibit, over a light orange background coloration, a pattern of dark orange dorsal saddles and lateral blotches that are outlined with black; the ventral scales are covered with a black and white checkered pattern and the eyes show a black pupil and orange iris. (B) Amelanistic corn snakes lack all signs of melanin: the black outline of the dorsal saddles and lateral blotches is replaced by white skin, and melanin is lacking in the iris and cornea.Image credit: LANE (Michel Milinkovitch)Among the 5,000 existing species of mammals, more than 100 have had their genome sequenced, whereas the genomes of only nine species of reptiles (among 10 000 species) are available to the scientific community. This is the reason why a team at the University of Geneva (UNIGE), Switzerland, has produced a large database including, among others, the newly-sequenced genome of the corn snake, a species increasingly used to understand the evolution of reptiles. Within the same laboratory, the researchers have discovered the exact mutation that causes albinism in that species, a result published today (Nov. 24) in Scientific Reports.

Genomics allows us to better investigate the evolution of the living world. Indeed, describing the function of each gene should enable us to understand how the snake lost its limbs or how various skin colorations have evolved. Unfortunately, reptiles are poorly represented in genomic databases. This is why Dr. Athanasia Tzika, researcher in the Department of Genetics and Evolution in the UNIGE Faculty of Sciences, has built a database including sequenced genomes from the major evolutionary lineages of reptiles: the Reptilian Transcriptomes Database 2.0.

“Our aim was to produce ourselves a substantial portion of the missing data by sequencing all genes from several reptilian species. To reach this goal, we used tissues, such as the brain and the kidney, expressing the largest number of genes”, Tzika says. Multiple other teams also generated sequencing data but each one used different methods for data analysis, making for difficult studies of the evolution of reptilian genomes. Hence, another part of Tzika’s work consisted of gathering these data and developing a bioinformatic approach allowing the production of a unified database, freely accessible and regularly updated. This tool will become useful for researchers all around the world working on the development and evolution of vertebrates in general and reptiles in particular.

Sequencing a genome is a tremendous task. It requires determining the sequence of the full genome of the investigated animal, corresponding to two billion nucleotides for the corn snake. DNA contains four basic molecules (the nucleotides) –ACGT–, which assemble by pairs (A with T and C with G) and constitute the sequence of each gene. To analyze the genome, one must read all the DNA by short fragments of 100 to 250 nucleotides that must then be assembled to reconstruct the enormous chain that forms each chromosome.

Nowadays, scientists can perform such assemblies to build fragments of about one million nucleotides. This work has been performed by the team of Michel Milinkovitch, professor in the Department of Genetics and Evolution at UNIGE.

“The objective was to obtain a genuine reptilian genomic model that people could rely on”, explains Tzika. “Here, we covered about 85 percent of the snake's total genome size”.

“There is much additional work ahead,” adds Asier Ullate, who also participated in the study, “because, to obtain a quality similar to that of the sequenced human genome, we need to assemble chromosomes which can form chains of more than 200 millions of nucleotides.” But why the corn snake ?

“This species is perfect for investigating the development and evolution of reptiles because it breeds easily, it is oviparous, and non-venomous. This species is also relevant in studying the genetic determinism and evolution of skin colors, particularly important for the camouflage of these animals in their natural habitat. We are happy to announce that the corn snake has joined the restricted group of model species allowing researchers to better understand the biological and physical mechanisms responsible for the evolution of the diversity and complexity of species,” answers professor Milinkovitch.

Discovery of the mutation responsible of amelanism

In that same UNIGE laboratory, Suzanne Saenko collaborated with a Swedish team to identify in the corn snake the mutation responsible for amelanism, a form of albinism due to a defect in the production of melanin (the black and brown pigments of the skin). The skin of the wild type corn snake exhibits a light orange background colour covered with a pattern of dark orange dorsal saddles and lateral blotches that are outlined with black. However, some individuals do not correspond to that standard morphology: they lack all signs of melanin in the skin and eyes. The Swiss team decided to search for the DNA mutation that determines that specific coloration. To this end, they bred wild-type corn snakes with amelanistic individuals and they sequenced each offspring born from that cross. “Thanks to that large amount of sequencing data, we identified the malfunctioning gene”, explains Milinkovitch. That gene is called OCA2 and codes for a receptor located in the membranes of intracellular compartments, called melanosomes, that contain melanin. This receptor controls the proper level of acidity allowing for the synthesis of melanin.

Thanks to the newly-sequenced genome of the corn snake, the precise identification of other mutations responsible for multiple variations of snake skin coloration will be greatly facilitated. This will allow us to save much time in our future research. As in amelanism, these spontaneous mutations that can appear randomly in any individual are the fundamental fuel of evolution on which natural selection will act. Without mutations, genetic variation and novelties explaining the evolution of new species are impossible. UNIGE researchers will now attempt to understand how some mutant corn snakes exhibit strongly modified color patterns such as longitudinal lines rather than transversal saddles, opening the way to comparisons among species with different skin color patterns … such as tigers and cheetahs, for example.