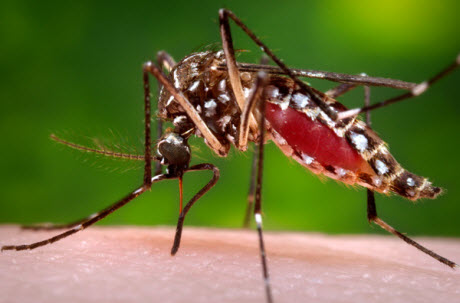 A female Aedes aegypti mosquito ingesting a blood meal. Dengue virus, like Zika virus, is spread by mosquitoes.Image credit: CDCHarvard Medical School scientists have found a compound that in laboratory dishes blocks the dengue virus in two ways, raising hopes for a future drug whose dual activity could suppress the otherwise likely emergence of drug resistance.

The HMS team, led by Priscilla Yang, an HMS associate professor of microbiology and immunobiology, reported its findings April 21 in Cell Chemical Biology.

Spread by mosquitoes, dengue belongs to the same family of viruses as Zika, whose emerging strain has just been linked by the U.S. Centers for Disease Control and Prevention to severe birth defects. Like Zika, dengue virus has no antiviral drugs to prevent illness or stop its spread.

Dengue virus infects more than 300 million people a year worldwide, causing no symptoms in some people but flu-like misery or dangerous hemorrhagic fevers in others.

The compound found by Yang’s team, GNF-2, keeps the dengue virus from infiltrating and overwhelming cells in the body. It does this by blocking its known kinase target inside the cell and by also inhibiting a viral target found on the surface of the virus. Yang considers the discovery of GNF-2 to be serendipitous.

“We had screened a library of known kinase inhibitors and had a ‘problem compound’ where we could not explain all the antiviral activity that we were seeing based on just the effect it had on the host kinase it normally targets,” Yang said.

That instance of serendipity was followed by years of experiments in collaboration with scientists across HMS, in particular, Stephen Harrison and Nathanael Gray, both professors in the Department of Biological Chemistry and Molecular Pharmacology. The dengue work was carried out through one of three Centers for Excellence in Translational Research at HMS, a National Institutes of Health effort designed to move discoveries about emerging infections closer to clinical applications in diagnosis, treatment and prevention.

“The compound was inhibiting the virus by targeting the host kinase, but then somehow it also was binding to the surface of the virion, and then preventing entry of the virus,” Yang said. “That’s not at all what we thought we would find when we did the original kinase inhibitor screen.” 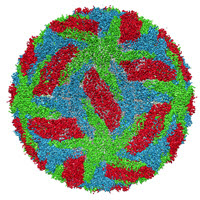 Protective membrane and membrane proteins of the dengue virus visualized with cryo-electron microscopy.Image credit: Hong Zhou, UCLA/NIHGNF-2 had surfaced in a chemical screen Yang’s lab performed in 2007, one compound among many showing some activity against dengue virus. Viruses invade host cells and replicate there, so jamming one or both processes could mean relieving the symptoms of infection and preventing transmission of the virus.

Yang said they zeroed in on host factors as antiviral targets because it seemed likely that related viruses would rely on the same or similar host factors to replicate. If they found a compound that worked against one virus, they surmised, it might work against others in the same family. Cellular kinases seemed likely to be required by the virus because they regulate most cellular processes.

Yang also hoped that finding a way to help the host cell repel the virus would overcome the virus’ ability to thwart antiviral drugs. Viruses evolve so frequently that their elements are moving targets for antiviral drugs. Tamiflu, for example, has lost much of its efficacy in the years since it was aimed against influenza, Yang said. By comparison, combination therapies, such as those used against HIV, can be successful because they fight the virus on more than one front.

In the case of dengue and other understudied and emerging viruses, resources to develop the kinds of drug combinations that have proven effective against HIV and hepatitis C virus may not be available. In these cases, a single drug that acts by targeting multiple viral processes simultaneously may provide an alternate way to suppress resistance.

“Dengue’s been an understudied virus,” Yang said. “Everything changed when the NIH made it a priority pathogen because the number of severe infections where people get very sick has been increasing. Like Zika right now or Ebola a few years back, it’s hard to predict when that will happen and where that will happen and the scale of how many people will be affected.”