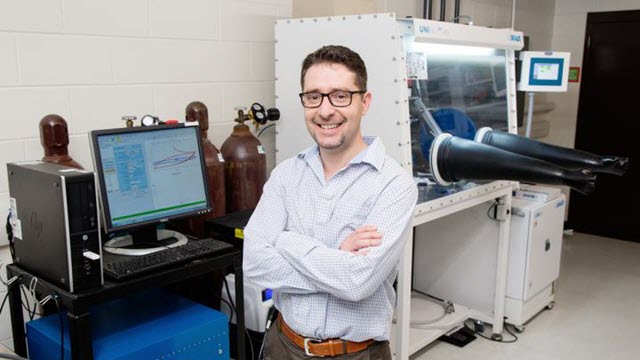 For the past several years, University of Illinois researcher Kyle Smith has proven his growing expertise in the field of water desalination, with a range of research results that could address the immediate need to combat diminishing clean water sources around the world.

Now, with a new publication and new research project funded by the National Science Foundation, he continues to build on his highly praised work to develop new methods of deionizing saltwater.

The paper, "Effect of Conductive Additives on the Transport Properties of Porous Flow-Through Electrodes with Insulative Particles and their Optimization for Faradaic Deionization," published this week in Water Research, demonstrated promising results for energy-efficient desalination of alternative water resources. Smith's newest work, spear-headed by his doctoral student Erik Reale, involves deionization devices that can reversibly store and release cations using intercalation materials, a class of materials commonly used for rechargeable batteries. This work in particular addresses the challenge of cycling intercalation materials with fast rates of electron, ion, and fluid transport, features that are difficult to achieve simultaneously in a single system.

His team fabricated optimized electrodes containing insulative Prussian Blue analogue particles, and used them in an experimental cation intercalation desalination (CID) cell with symmetric electrodes. They witnessed results of a nearly 10-fold increase in the rate of salt removal at similar energy consumption levels to past CID demonstrations.

"High salt removal rates are needed in electrochemical water treatment devices because smaller units can be constructed to achieve the same total production of treated water if salt can be removed faster. Following that line of thinking, the capital cost to construct a system will be lower for a fixed water productivity level," said Smith.

Kyle Smith's latest work addresses the challenge of cycling intercalation materials with fast rates of electron, ion, and fluid transport, features that are difficult to achieve simultaneously in a single system.Credit: Kyle Smith

In his new three-year NSF-funded research project, "Enabling Minimal Brine Discharge Desalination Using Intercalation Reactions," Smith will be using battery materials to overcome the limitation in the volume of waste brine that is produced during water desalination using reverse osmosis (RO). Brine disposal has major environmental sustainability issues, including increased earthquakes when injected into the earth and danger to aquatic ecosystems when disposed of in bodies of water. While RO brine generation is dictated by the pressure driving force used (and thus imposes mechanical limitations), Smith plans to use electric fields to concentrate salt ions, which, he proposes, could concentrate salts to levels near saturation in solution.

The University of Illinois previously reported, in 2016, that Smith had discovered the technology that charges batteries for electronic devices could provide fresh water from salty seas. He developed a novel device—a saltwater-filled battery with electricity running through it—that deionized water using the least amount of energy possible at the time. This work earned a spot on the list of top 10 most-read articles from the Journal of the Electrochemical Society in 2016.

Just a year later, in 2017, Smith and his team took saltwater desalination a step further, focusing on new materials to improve the economic viability and energy efficiency of the process in collaboration with Wetsus, the European Centre of Excellence for Water Technology. They created a battery-like device that uses electrodes made from a material that could remove not only sodium ions but also potassium, calcium, magnesium, and others—an important technological improvement because saltwater and brackish waters often contain a mix of other salts like potassium, calcium, and manganese chloride. This work was published in the journal Electrochimica Acta.

The present experimental work also follows work published by Smith and his students using computational modeling of electrochemical transport to guide the design of battery-based desalination cells. Their group has also recently used quantum mechanical modeling, combined with experiments and thermodynamic analysis, to understand how the battery materials used in their desalination cells absorb sodium, as well as magnesium and calcium, at the atomic scale.