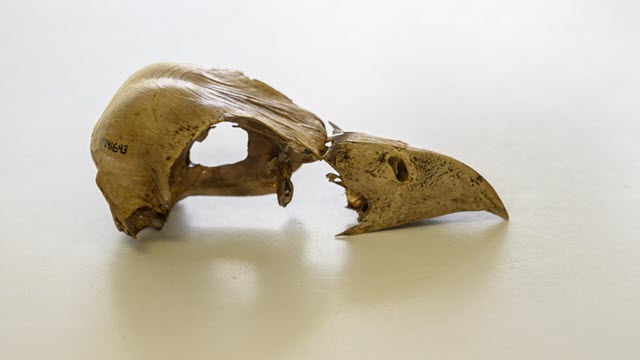 GAINESVILLE, Fla. — Scientists have recovered the first genetic data from an extinct bird in the Caribbean, thanks to the remarkably preserved bones of a Creighton's caracara from a flooded sinkhole on Great Abaco Island.

But the dark, oxygen-free depths of a 100-foot blue hole known as Sawmill Sink provided ideal preservation conditions for the bones of Caracara creightoni, a species of large carrion-eating falcon that disappeared soon after humans arrived in the Bahamas about 1,000 years ago.

Florida Museum of Natural History postdoctoral researcher Jessica Oswald extracted and sequenced genetic material from a 2,500-year-old C. creightoni femur from the blue hole. Because ancient DNA is often fragmented or missing, Oswald had modest expectations for what she would find—maybe one or two genes. But instead, the bone yielded 98.7 percent of the bird's mitochondrial genome, the set of DNA that most living things inherit only from their mothers.

"I was super excited. I would have been happy to get that amount of coverage from a fresh specimen," said Oswald, lead author of a study describing the work and also a postdoctoral researcher at the University of Nevada, Reno. "Getting DNA from an extinct bird in the tropics is significant because it hasn't been successful in many cases or even tried."

The mitochondrial genome showed that C. creightoni is closely related to the two remaining caracara species alive today: the crested caracara, Caracara cheriway, and the southern caracara, Caracara plancus. The three species last shared a common ancestor between 1.2 and 0.4 million years ago.

At least six species of caracara once cleaned carcasses and picked off small prey in the Caribbean. But the retreat of glaciers 15,000 years ago and the resulting rise in sea levels triggered extinctions of many birds, said David Steadman, Florida Museum curator of ornithology.

C. creightoni managed to survive the sweeping climatic changes, but the arrival of people on the islands ultimately heralded the species' demise, as the tortoises, crocodiles, iguanas, and rodents that the caracara depended on for food swiftly disappeared.

"This species would still be flying around if it weren't for humans," Steadman said. "We're using ancient DNA to study what should be modern biodiversity."

Today, the islands host only a fraction of the wildlife that once flourished in the scrubland, forests, and water. But blue holes like Sawmill Sink can offer a portal into the past. Researchers have collected more than 10,000 fossils from the sinkhole, representing nearly 100 species, including crocodiles, tortoises, iguanas, snakes, bats, and more than 60 species of birds.

Sawmill Sink's rich store of fossils was discovered by cave diver Brian Kakuk in 2005 in his quest for horizontal passages in the limestone. The hole was not a popular diving spot: Thirty feet below the surface lay a 20-foot-thick layer of saturated hydrogen sulfide, an opaque mass that not only smells of rotten egg, but also reacts with the freshwater above it to form sulfuric acid, which causes severe chemical burns.

After multiple attempts, Kakuk, outfitted with a rebreather system and extra skin protection, punched through the hydrogen sulfide. His lamp lit up dozens of skulls and bones on the blue hole's floor.

"This was found by someone who recognized what it was and never moved anything until it was all done right," Steadman said.

Though the hydrogen sulfide layer presented a foul problem for divers, it provided excellent insulation for the fossils below, blocking UV light and oxygen from reaching the lower layer of water. Among the crocodile skulls and tortoise shells were the C. creightoni bones, including an intact skull.

"For birds, having an entire head of an extinct species from a fossil site is pretty mind-blowing," Oswald said. "Because all the material from the blue hole is beautifully preserved, we thought at least some DNA would probably be there."

Since 2017, Oswald has been revitalizing the museum's ancient DNA laboratory, testing methods and developing best practices for extracting and analyzing DNA from fossils and objects that are hundreds to millions of years old.

Ancient DNA is a challenging medium because it's in the process of degradation. Sometimes only a minute quantity of an animal's original DNA—or no DNA at all—remains after bacteria, fungi, light, oxygen, heat, and other environmental factors have broken down an organism.

"With ancient DNA, you take what you can get and see what works," Oswald said. "Every bone has been subjected to slightly different conditions, even relative to other ones from the same site."

To maximize her chance of salvaging genetic material, Oswald cleans a bone, freezes it with liquid nitrogen and then pulverizes it into powder with a rubber mallet.

"This puts an exclamation point on what's possible with ancient DNA," said Robert Guralnick, Florida Museum curator of bioinformatics. "We have new techniques for looking at the context of evolution and extinction. Beyond the caracara, it's cool that we have an ancient DNA lab that's going to deliver ways to look at questions not only from the paleontological perspective, but also at the beginnings of a human-dominated planet."

Steadman, who has spent decades researching modern and extinct biodiversity in the Caribbean, said some questions can only be answered with ancient DNA.

"By understanding species that weren't able to withstand human presence, it helps us better appreciate what we have left—and not just appreciate it, but understand that when these species evolved, there were a lot more things running and flying around than we have today."