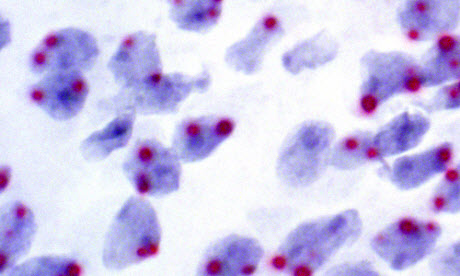 A team led by Christopher Gregg, Ph.D., associate professor in neurobiology and anatomy at the University of Utah School of Medicine reports a targeted version of parental control over gene expression is more common than classic genomic imprinting. Published in Cell Reports, so-called noncanonical imprinting is particularly prevalent in the brain, and skews the genetic message in subpopulations of cells so that mom, or dad, has a stronger say. Subsets of cells predominantly express a single copy of the autism-linked gene Ahi1 inherited from one parent (one dot) while others express both copies (two dots).Photo Credit: Christopher GreggNot every mom and dad agree on how their offspring should behave. But in genetics as in life, parenting is about knowing when your voice needs to be heard, and the best ways of doing so. Typically, compromise reigns, and one copy of each gene is inherited from each parent so that the two contribute equally to the traits who make us who we are. Occasionally, a mechanism called genomic imprinting, first described 30 years ago, allows just one parent to be heard by completely silencing the other.

Now, researchers at the University of Utah School of Medicine report on a version of genetic parental control in mice that is more targeted, and subtle than canonical imprinting. Published in Cell Reports, so-called noncanonical imprinting is particularly prevalent in the brain, and skews the genetic message in subpopulations of cells so that mom, or dad, has a stronger say. The mechanism can influence offspring behavior, and because it is observed more frequently than classic imprinting, appears to be preferred.

“The field has traditionally thought of genetics at the level of the whole animal, and sometimes the tissue. We’re documenting it at the cellular level,” says senior author Christopher Gregg, PhD, assistant professor of neurobiology and anatomy. “Genetics is much more complicated than we thought.”

A case in point is the impact of noncanonical signaling on motivated behaviors that prompt a timid mouse to leave its protective shelter when it needs to search for food. Five genes preferably controlled by mom, or dad, cluster within a biochemical pathway that creates serotonin and dopamine, neurochemicals that affect mood and behavior. The imprinting is further customized by being enriched in subregions of the brain known to control behavior (arcuate nucleus, and dorsal raphe nucleus). When the scientists remove the active, maternal copy of one of the genes, tyrosine hydroxylase (Th), they see a modest but consistent increase in the amount of time the mice spend out in the open, showing it controls the behavior. By contrast, mice with their muffled, paternal copy removed show no behavioral changes.

“We speculate that a better strategy for imprinting is to do it in the cells that are needed to achieve the desired effect, rather than to do it in every tissue,” says Gregg.

In total, 80 percent of 210 imprinted genes analyzed – the vast majority - were subject to noncanonical imprinting. 64 percent of those genes showed parental bias exclusively in the brain or subregions of the brain, and not in non-neural tissues, liver or muscle.

The results expand on previous work by another group who found a gene that imprints in specific neurons, and is reported to be associated with autism when mutated. This and the current study’s behavior experiments highlight that in addition to fine-tuning parental control, noncanonical imprinting may have a downside.

Gregg speculates that the targeted form of imprinting gives rise to “high-risk” neurons that are especially vulnerable to mutations inherited from one parent because they don’t express a second, healthy back-up copy to compensate for the mistake. “We think that subpopulations of cells that preferentially express mutated genes could disproportionately contribute to brain disorders such as autism,” he says. Future research will test the hypothesis and novel therapies to overcome the deficits.