May 28, 2021University of Massachusetts Amherst

A new paper, published recently in PLOS Computational Biology by a team including University of Massachusetts Amherst (UMass Amherst) researchers, seeks to help scientists structure their lab group meetings so that they are more inclusive, more productive and, ultimately, lead to better science.

The word "scientist" might conjure images of lab-coated researchers tending bubbling beakers or building supercomputers, but an enormous amount of scientific work takes place around a conference table during weekly group meetings. "There is plenty of good research showing that diversity and inclusion make the science itself better," says Kadambari Devarajan, one of the paper's co-lead authors and a graduate student in organismic and evolutionary biology as well as environmental conservation. Such diversity and inclusion starts with the structure of the lab meeting itself. Kadambari and her colleagues developed a set of 10 guiding principles that help to cultivate lab environments that are inclusive as well productive lab environment, which range from the practical—"Rule 2: Identify roles and rules" and "Rule 6: Manage conflict"—to the interpersonal: "Rule 5: Be respectful and practice civility" and "Rule 9: Be aware of biases." 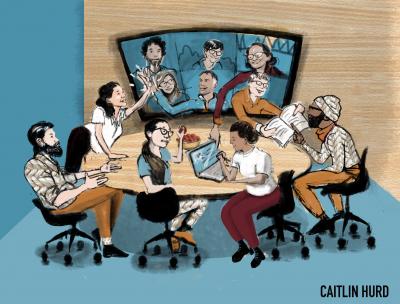 At the time of this publication, the lab meetings typically consisted of one principal investigator, five to 10 graduate students, one postdoctoral fellow, some undergraduates, and a few visiting students.
Courtesy Caitlin Hurd

Each of the 10 rules came out of the team's own working practice, honed by years of use, in Toni Lyn Morelli's lab, whose members hail from countries around the globe and are in various stages of their careers. Morelli (Northeast Climate Adaptation Science Center and US Geological Survey), a co-author of the paper and a research ecologist affiliated with the environmental conservation department as well as the organismic and evolutionary biology program, notes that though diversity and inclusion are of interest far beyond the realm of science, there's not always a practical guide to go by. "How does one create a diverse and inclusive lab that enables all members to bring their whole selves? What week-to-week actions can reinforce the sense of community and increase an individual's, and thus the whole group's, productivity?" She hopes that these guidelines can act as inspiration for her graduate students, as well as other lab groups, to build similar and even better spaces in the future.

When answers to practical questions such as these are approached deliberately, the result can be powerful and long-lasting. "Lab meetings can be some of the most memorable and rewarding moments in our academic careers," write the authors, and can help "increase diversity in science, boost scientific creativity, and facilitate problem solving."

Perhaps most powerfully, the paper's authors argue that what happens in the lab doesn't just stay in the lab—it ripples out into society at large. "Science isn't isolated from what's happening outside of academia," says Nigel Golden, co-lead author, graduate student in environmental conservation, and a fellow at the Northeast Climate Adaptation Science Center, "the world is influencing our science, and our science is influencing the rest of the world."

Devarajan, Morelli, and Golden have also all been recognized as leaders in the effort to diversify science. Devarajan is a recipient of the organismic and evolutionary biology program's Justice, Equity, Diversity, and Inclusion Fellowship, Morelli has received the department of environmental conservation's Diversity, Equity, and Inclusion award, and Golden is a recipient of the College of Natural Science's award for outstanding achievement in inclusion and excellence.

- This press release was originally published on the UMass Amherst News & Media Relations website. It has been edited for style