BOSTON, MA — December 2, 2020 — A lipid metabolite called 12,13-diHOME is in human breast milk and appears to be associated with beneficial infant weight gain and body composition in the early postnatal period. Moreover, maternal fitness, specifically exercise, appears to boost levels of the metabolite in breast milk and so might benefit their offspring. This finding was published online by The Journal of Clinical Endocrinology and Metabolism.

The authors of the study propose that 12,13-diHOME, as well as linked pathway metabolites from breast milk, have a protective effect against obesity development in offspring. They also suggest that a single bout of maternal exercise may boost levels of the metabolite in breast milk and that may translate into benefits for offspring in terms of healthy growth and development.

The metabolite is derived naturally from diet directly from linoleic acid, an essential fatty acid (Omega-6) found in many plant-derived oils as well as nuts and seeds.

The research was led by Elvira Isganaitis, MD, from Joslin Diabetes Center, staff physician at Joslin Diabetes Center and assistant professor of pediatrics at Harvard Medical School; and David Fields PhD, who is associate professor and the CHF Chickasaw Nation Endowed Chair in Pediatric Diabetes at the University of Oklahoma Health Sciences Center.

"Although breast milk has long been promoted as a way to lower the risk of childhood obesity, the data have not been entirely consistent," said Isganaitis. "The literature is contradictory, and in many cases the protective effects of breastfeeding disappear after controlling for maternal factors such as education, obesity, smoking, or socioeconomic status.

We propose that variations in milk composition between mothers may account for some of the discrepancies that have been observed in terms of childhood obesity and diabetes risk. In other words, some mothers may have greater amounts of protective factors in their milk."

The main focus of the overall study was a prospective cohort study that involved initially 58 mother-singleton infant pairs recruited over the period of 2015-2019. The infants were assessed for various anthropometric parameters related to growth and body composition over a six-month period of follow-up.

The mothers meanwhile provided breast milk samples over the same period of assessment and these were analyzed with a variety of techniques including targeted mass spectrometry, lipidomics, and metabolomics approaches. In a separate part of the study, as a pilot, the authors also recruited 16 mother-infant pairs to assess the effects of a mild session of exercise on milk abundance of 12,13-diHOME.

As well as identifying 12,13-diHOME in human breast milk, potentially for the first time, the authors report that the abundance of the metabolite was positively associated with BMI at birth but negatively associated with various measures of adiposity, BMI, and fat mass six months post-partum. Crucially, they also identify largely the same patterns in metabolites in the same biosynthetic pathway, backing up the observations with respect to 12,13-diHOME.

All of the metabolites they identify are involved in the so-called 'browning' or 'beigeing' of fat cells, which is a process linked with increased energy expenditure in adipose tissue, and so, the thinking that infants receiving higher levels of the metabolites should benefit in terms of healthier growth patterns (and potentially avoid childhood obesity). 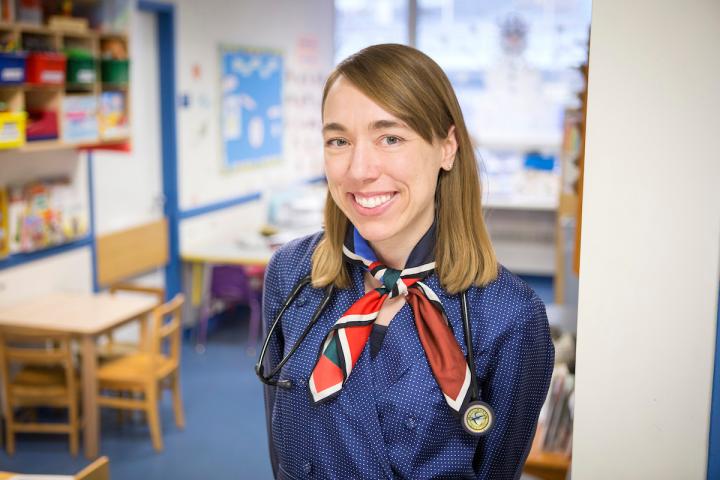 For the smaller pilot study, which was supported by the Harold Hamm Diabetes Center, the authors found that at one-month postpartum, the overall increase in 12,13-diHOME in milk was 1.39-fold following a 90-minute period of acute exercise. The eight volunteers included who were normal weight experienced a 1.50-fold increase, while the eight individuals with obesity experienced a 1.32-fold increase following exercise.

"Although the underlying biological mechanisms are currently unclear, it seems that metabolites in breast milk associated with increased energy expenditure are present, but are also influenced by a single bout of exercise—this is inescapably exciting for this field" said Fields.

In terms of implications, Isganaitis added, "The fact that exercise resulted in measurable differences in breast milk composition adds to the growing literature about the multitude of effects that exercise has on the human body. The exciting implication for new parents is that when a mother exercises, it has the potential to improve not only her own health but may also result in metabolic benefits for her child."

The authors do point towards some limitations with the study, not least, that the design precludes definitively proving causality between 12,13-diHOME and adiposity levels in infants.

- This press release was originally published on the Joslin Diabetes Center website. It has been edited for style