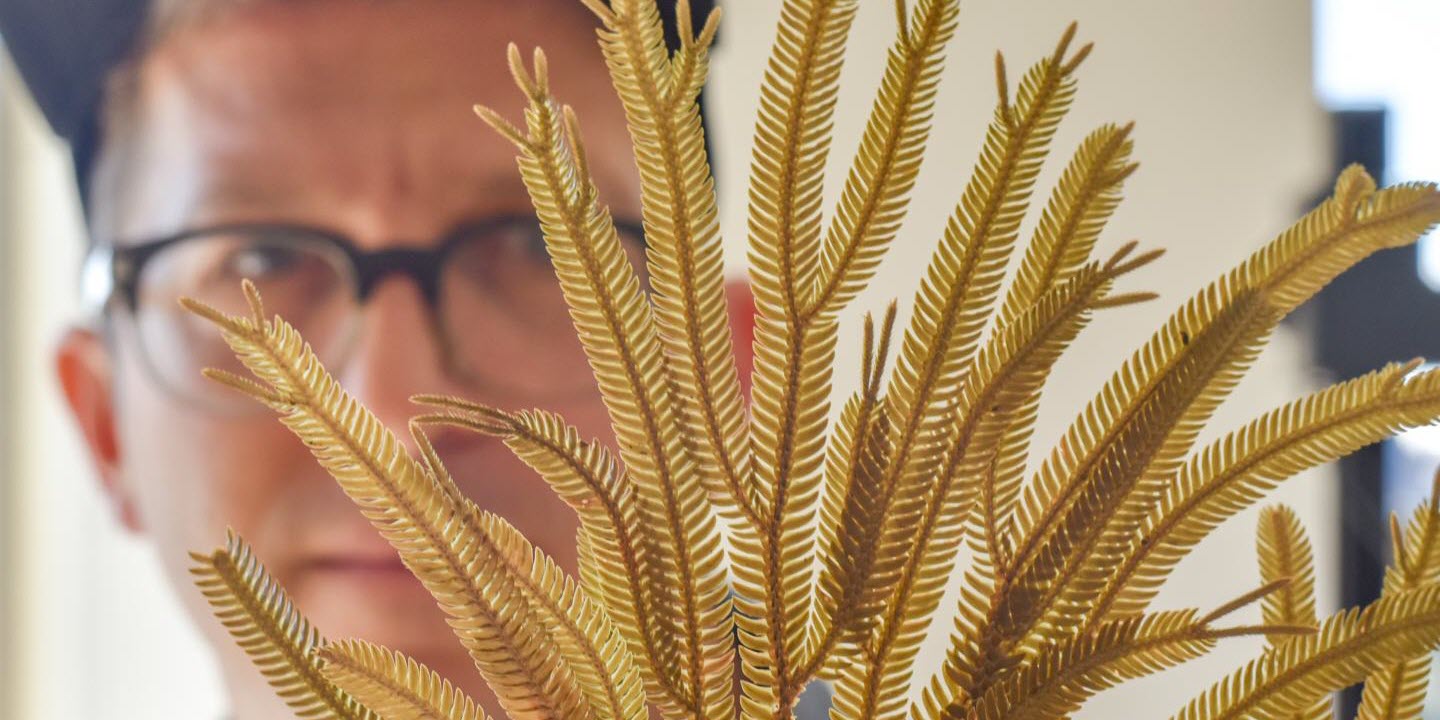 University of Vermont fern expert Michael Sundue collected this Selaginella on the tropical island of New Guinea—and brought it back to study in Vermont. He's a co-authors on a new study in the journal Nature revealing the staggering diversity of plant life on this tropical island.
Joshua Brown, UVM

Imagine if there were, say, 600 species of giraffes: some the size of a shrew, some three stories tall, some with purple spots. Of course, many giraffes could be found in Africa, but suppose there were reports of rare ones, wandering high in the mountains of the remote tropical island of New Guinea.

And also imagine that no one studied any of these species, that there were no giraffe experts anywhere. Now substitute "fern" for "giraffe" and you have some rough sense of the work of fern expert and University of Vermont (UVM) research professor Michael Sundue—and why he's traveled to New Guinea on three expeditions to look for ferns.

In a study published Aug. 5 in the journal Nature, Sundue and three other UVM plant scientists joined a global team of researchers from 56 institutions to present the first expert-verified checklist to the vascular plants of New Guinea and surrounding islands. So much uncertainty surrounded the number of New Guinea plants known to science that estimates ranged from 9,000 to 25,000. The researchers pored through digital records and plant collections scattered around the world, drawing on the expertise of 99 specialists—to tally 13,634 species in 264 families, with thousands yet to be discovered.

The team's work—supported by the US National Science Foundation and other funders—reveals that New Guinea is the world's richest island for plants.

In his office, at the University of Vermont's renowned Pringle Herbarium, Sundue holds up a dried plant mounted on newsprint. "Oh that's sexy; that's a Selaginella," he says, pointing to a comely frond that looks a lot like a fern, but more technically is a lycophyte. "I'm not an expert on this. No one else studies this group of plants. There's no Selaginella expert on Earth—and there are 600 species worldwide."

Sundue is an expert on two other groups of ferns—which is why he was called in on the new Nature study. But his goal is not simply to count and identify plants. "The bigger question is where are biodiversity hotspots in the world—and why?" he says. "I've been trying to address that for ferns." New Guinea has been a "black hole," Sundue says, for many plants including ferns. "It's remote, dangerous, hard to get to with almost no roads. You can't just check an app or look at a museum collection—a lot of species have almost no records. So how are you supposed to interpret the evolution of plants on Earth—if you have missing pieces?" he says. "You have to go there and collect."

He holds up the dried plant from New Guinea in the bright Vermont sunshine. "That's a pretty handsome Selaginella," Sundue says. "It's one of the most ancient surviving lineages of plants on Earth."

When the 18th-century Swedish botanist Carl Linnaeus set out to catalog all the world's plants and animals, he proposed their origin was a high mountain in Paradise: an island on the equator revealed when the primeval waters started to subside. "While his notion of one source area for all organisms was soon abandoned," says Rodrigo Camara-Leret—from the University of Zurich and the lead author on the new study—if he were alive today, Linneaus "would likely choose New Guinea as his symbol of a Paradise island teeming with life."

Except for the frozen rock of Greenland, New Guinea is the largest island in the world, just north of Australia and near the equator. Shaped like a crook-necked bird, it covers more than 300,000 square miles—nearly twice the size of California—with a huge spine of mountains that rise to over 16,000 feet. With very complex geology, New Guinea supports a dazzling array of ecosystems—some of the best-preserved on the planet—from mangrove jungles to alpine grasslands to ice-covered mountaintops. It's not surprising that its size and geographic diversity yields the world's richest island flora.

Related Article: Half the Earth Is Relatively Unscathed by Humans, Study Says

From his work in New Guinea and other places, "we can clearly see now that ferns are most diverse in tropical mountains," Sundue says—largely because "there are so many niches stacked on top of each other combined with the fact that there's low seasonality." This lets the ferns specialize on one habitat and climate type, genetically isolated from each other by rugged topography, leading to species formation.

Since the 17th century, botanists have described and named plants collected in New Guinea. Thousands of plants from the island are stored in herbaria there as well as the Netherlands, Great Britain and the US—including UVM. But despite advances in the past decades in clarifying the taxonomy of many New Guinea plants, publications about these plants have remained scattered, as botanists worked mostly independently from each other. "Great uncertainty remained as to how many plant species grew in New Guinea," says Camara-Leret. "Effectively, compared to other areas, like Amazonia which had plant checklists recently published, New Guinea remained the 'Last Unknown'"—until the publication of this new study in Nature.

The results show that New Guinea has 19 percent more species than Madagascar and 22 percent more species than Borneo—making it the richest island in the world for plants. Also the new research shows that 68 percent of New Guinea's plants are only found on that island; this high level of endemism is unmatched in tropical Asia. "And it reveals the value of experts," says Sundue, including fellow fern experts—David Barrington, chair of UVM's Department of Plant Biology; recent UVM doctoral student Weston Testo; and Pedro Schwartsburd, a long-term visitor to Sundue's lab from Brazil—and co-authors on the new Nature study. Using online taxonomic platforms alone, the scientists estimate, would have inflated the species count in New Guinea by 22 percent—many thousands of false data points or confused names.

"The study also shows that we need to invest in training a large group of young and resident taxonomists in New Guinea," says Sundue. New Guinea plants have been mainly studied by non-resident experts, of whom 40 percent are retired or within ten years of turning 65 years old. But the team estimates that 3-4,000 new plants could be added to their checklist in the next few decades if there is long-term support for developing a new generation of local experts. "Land-use change is an increasing threat so more botanical exploration is therefore urgently needed if unknown species are to be collected before they disappear," the team writes in the new study.

"A checklist may not seem that interesting," Sundue says, "but it's foundational"—giving future studies greater accuracy and clearer targets, like focusing DNA work on species in particularly rich groups and "identifying blank spots on the map to go explore," Sundue says. "Biologists are trying to put together the history of life on Earth and that is done by examining all of the constituent organisms that live here," he says, "not just the ones that are easy to find."

- This press release was originally published on UVM Today