A lab-designed hormone could unlock mysteries harbored by plants.

By developing a synthetic version of the plant hormone auxin and an engineered receptor to recognize it, University of Washington biology professor Keiko Torii and her colleagues are poised to uncover plants’ inner workings.

The new work, described in a paper published online Jan. 22 in Nature Chemical Biology, is a “transformative tool to understand plant growth and development,” said Torii, who is also an investigator with the Howard Hughes Medical Institute. That understanding may have big agricultural implications, raising the possibility, for instance, of a new way to ripen fruits such as strawberries and tomatoes.

To plants, the hormone auxin is king. Among many other jobs, auxin helps sunflowers track sunlight, roots grow downward and fruits ripen. This wide range of jobs, as well as the fact that every cell in a plant can both produce and detect auxin, makes it tricky to tease apart the hormone’s various roles.

“It’s been a huge mystery as to how such a simple molecule can do so many different things,” said Torii, who is senior author on the paper. 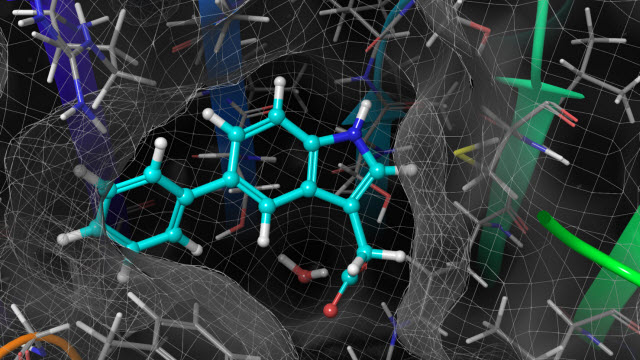 A synthetic version of auxin and its protein receptor (light blue) nestle together, creating a matched set that behaves just like the natural one.Image credit: Keiko Torii/University of Washington/HHMI/Shinya Hagihara/Nagoya University

She and her colleagues set out to create a new way to study plants’ responses to auxin by designing a lab-made version of the hormone that can be precisely controlled. Working with synthetic chemists at Nagoya University in Japan, the researchers added a little bump to auxin’s structure—hydrocarbon rings that auxin doesn’t normally contain. The researchers then tweaked plants’ auxin receptor, a protein that sits on the outside of plant cells and detects auxin. They removed a bulky amino acid from the receptor, creating a perfect-sized hole that cradles the lab-made auxin.

Next, the researchers tested whether this matched set—the synthetic auxin and the synthetic receptor—could do the same jobs as the cells’ natural auxin/receptor pair. The intricately designed system worked beautifully, based on results from experiments on roots. 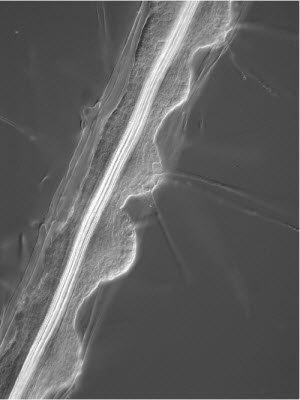 After treatment with auxin, normal plant roots begin branching out to the side. After treatment with synthetic auxin, plants engineered to detect the hormone do the same thing (bumpy root branches shown).Image credit: N. Uchida et al./Nature Chemical Biology 2018Normally, roots exposed to auxin stop growing down, and instead grow sideways by activating stem cells that break out of the main root. The process, called lateral root development, is comparable to aliens bursting through stomachs, said Torii. After detecting synthetic auxin, Arabidopsis plants genetically engineered to produce the synthetic auxin receptor behaved just like normal—growing the same sideways baubles of root branches.

With their system up and running, the researchers tested a long-standing question in plant biology. Scientists knew that germinating seedlings use auxin to grow quickly. But the identity of the exact receptor that allows this process to happen wasn’t settled.

The scientific community had a suspect in mind. Torii’s team produced a plant that lacked an auxin receptor called TIR1, and instead possessed a synthetic version. When exposed to artificial auxin, these seedlings began to grow rapidly, behaving exactly as if they had the normal receptor. The results suggest that seed elongation does indeed happen through the TIR1 receptor.

Other fundamental scientific questions can be addressed with this system, Torii said, such as auxin’s role in corn ripening and in opening the stomata, the structures that let plants breathe.

One day, synthetic auxin might even find a place in agriculture. Auxin is currently sprayed on fruits to hasten ripening. But in high concentrations, the hormone can act as a plant-killing herbicide. Fruits engineered to carry the synthetic receptor could be ripened with the synthetic auxin hormone, Torii said, eliminating the need to spray auxin indiscriminately. But, she cautions, much more testing needs to be done before a synthetic hormone system can be used for growing food.

Naoyuki Uchida and Koji Takahashi at Nagoya University are co-lead authors on the paper. Co-authors on the study are Rie Iwasaki, Ryotaro Yamada, Masahiko Yoshimura, Hua Zhang, Mika Nomoto, Yasuomi Tada, Toshinori Kinoshita, Kenichiro Itami, and Shinya Hagihara at Nagoya University; Takaho Endo with the RIKEN Center for Integrative Medical Sciences; and Seisuke Kimura at Kyoto Sangyo University. The research was funded by the Japan Society for the Promotion of Science; the Ministry of Education, Culture, Sports, Science and Technology of Japan; the Japan Science and Technology Agency; the Howard Hughes Medical Institute; and the Gordon and Betty Moore Foundation.